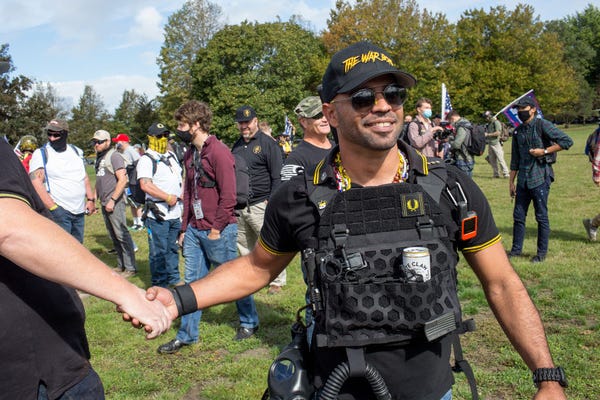 The Proud Boys was thrust into the national spotlight Tuesday night when President Donald Trump, asked to denounce white nationalists at the presidential debate, told members of the group to "stand back and stand by."

Its members often host counter-protests at rallies hosted by left-wing activists, ramping up in recent months in reaction to Black Lives Matter demonstrations. The encounters often result in violence.

The Southern Poverty Law Center has designated The Proud Boys as a hate group, and Facebook attempted to ban pages and accounts associated with the organization in 2018 after members assaulted protesters in New York.

Enrique Tarrio, the international chairman of the Proud Boys, told Insider it's becoming more politically organized for this year's elections.

Chapters around the US are instead working to elect dozens of members who are running for office themselves in local, state, and federal positions, Tarrio said, moving beyond the organization's street rally roots.

"It's not as powerful as the dry ink on a piece of paper of running for congressman, senator, or city official," Tarrio said. "The next step in the evolution is to be the change that you're pushing as an activist, no matter what side you're on."

You might not know you're voting for a Proud Boy

The number of people who are Proud Boy members is in dispute. Tarrio told Insider that there are about 22,000 men around the world who he considers Proud Boy members, and that at least 30 of them are running in this year's elections.

Vegas Tenold, an investigative researcher for the Anti-Defamation League's Center on Extremism, says that he doubts international membership is as high as Tarrio claims, as there has never been a rally with more than 400 self-identified Proud Boys.

He does believe, though, that there are likely are Proud Boys members running for election and that some might not want their affiliation known.

Tarrio declined to name the members running for office, but said chapter members are seeking office ranging from city councilor to US congress.

"We have our guys who are running for office and we'll be busy door-knocking pretty much across the county," he told Insider. "We're focused on the election and getting our favorite candidates elected, including our guys."

Tarrio, a Cuban-American, himself ran for office earlier this year. He dropped before last month's primary to represent Florida's 27th congressional district after fundraising struggles.

"Really just for the safety and protection of the people running, and myself included, I can't really give you names," Tarrio said.

People may not even know if they're voting for a member of the group. Last year, a 32-year-old Proud Boy member with a criminal history was appointed to the Fennville City Commission.

It wasn't until a week into his appointment that his history was discovered, The Detroit News reported at the time.

"I mean most of the Proud Boys are obviously Trump supporters, but that doesn't mean that if you don't have a certain belief we don't accept you," Tarrio said. "It's a men's drinking club. It's not a conservative drinking club."

But the vibe among those who attend rallies, though, is overwhelmingly pro-right — and extreme.

Tarrio tried to distance the Proud Boys from white supremacy and violence, but the history is there

At Tuesday's presidential debate, President Donald Trump was asked whether he condemns white supremacy. Trump asked for a group to condemn specifically, and Joe Biden identified the Proud Boys.

Trump responded ambiguously: "Proud Boys — stand back and stand by." He then pivoted to attacking left-wing groups.

Tarrio said that the Proud Boys denounces white supremacy and that a Republican voting record is not necessary to be a member.

Though the group's leadership has tried to distance it from white supremacy and violence, the links are well-documented.

Jason Kessler, the primary organizer of the 2017 Unite the Right Rally in Charlottesville, is a former Proud Boy member. Several members, including Tarrio, attended the rally, which included a violent demonstration that ended in the death of counter-protester Heather Heyer.

Republican operative Roger Stone has repeatedly used the Proud Boy members as security while attending events and posed with members of the group flashing a "white power" symbol in 2018. Also that year, several members were arrested after a brawl broke out outside of a Republican Club in Manhattan following an appearance by Proud Boys founder Gavin McInnes.

The ADL describes the group as "primarily alt-lite" and says their views are misogynistic, Islamophobic, transphobic, and anti-immigration.

All of the group's members, though, have accepted the Proud Boy tenants and attend at least one chapter meet-up at local bars a month, he said.

The tenants include declaring that he is "a Western chauvinist who refuses to apologize for creating the modern world."

Tarrio said that a unifying factor for Proud Boys candidates, and "probably the most important thing" is that they are "pro-free speech" Tarrio said.

"I get that we're not everyone's cup of tea. We're a little rough around the edges, but we're definitely not what they make us out to be. I denounce white supremacy and I denounce fascism and communism."

As for how many active Proud Boys members have real likelihood of being elected this fall, Tarrio said he wasn't sure.

"I don't know what our chances are, I haven't looked at the numbers for all our guys," he said.

The Proud Boys is just over four years old. Tarrio said that this isn't the first election in which members had participated.

While many members are not politically involved, a contingent is made up of activists. For them, they need to move beyond just hosting rallies, he said.

"If you're an activist, and you're trying to make change, the next step is running for office," Tarrio said.