At Sydney’s Marrickville Library, you can get pizza delivered to your lounge chair or secret nook. Even better, you can eat it there or in the sunken garden while using the wifi.

These two libraries are among five finalists announced last Friday for the International Public Library of the Year Award 2021 to be announced in August. 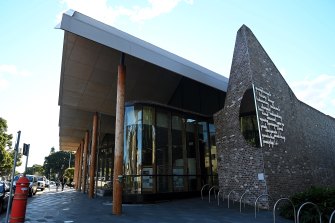 The Marrickville Library is in the running to win an international award for library of the year.Credit:Kate Geraghty

These aren’t your parents’ libraries. Or even those older siblings may have visited.

Another finalist, the new Deichman Bjørvika in Oslo Norway includes a secret and hidden library for the future. The six-storey building has a gaming zone, secret rooms for children and views of the fjord. As well as borrowing from the collection of 450,000 books, locals can learn to sew or play the piano.

Its “Future Library” project has commissioned authors including Margaret Atwood to write novels that won’t be published – or even available to be read – until 100 years from now. 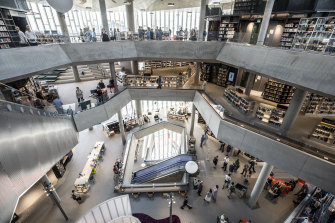 Oslo’s new library is called the library with a view. Credit: Erik Thallaug

Another finalist, the library and cultural centre Forum Groningen in the Netherlands is based on the Roman forum. And the Het Predikheren, the new library in Belgium incorporates a Baroque monastery. It was described by judges as “poetic” with a sense of “mystique”.

Nearly all have cinemas, play and meeting areas and public spaces.

Even 20 years ago, many libraries were “supermarkets of books” with rows of dimly lit books, said Cameron Morley, the manager of public library services with the State Library of NSW.

Today’s libraries had a greater variety of nuanced spaces for different types of visitors with different needs and differing amounts of tolerance for noise. They had also made it easier to find items in the collection, he said.

Many libraries were now being designed with increased outdoor space where patrons could use the wifi but still be safely spaced, he said.

Announcing the shortlist, the judges admired Marrickville’s beautiful adaptive re-use of the old Marrickville hospital. The floating canopy roof originates from the pitched roof of the existing building.

So what does Marrickville have that they don’t?

Heart, said Inner West council mayor Darcy Byrne. “It’s not just a library, it is the town square. It is the heart of Marrickville. It is such a lively place. There are so many young people coming in. It is not quiet or old or dead. It is lively and youthful.” 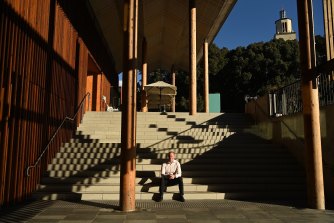 Inner West Mayor Darcy Byrne says the heart of the community found inside the Marrickville Library distinguishes it from its international competitors.Credit:Kate Geraghty

Last October, the 3600 square metre library had 53,000 visitors, including a record number of young people studying at university or the HSC. It’s become so popular that the council’s senior manager of libraries Caroline McLeod has had to place three orders for additional chairs.

Since it opened in late 2019, visitors numbers have more than doubled. Many come for the day. “It’s a joyous thing to see how many people are in the library,” said Ms McLeod.

Ms McLeod said it might not have a hidden library like Norway’s. But it did “have secret spots or secluded spots where you can be alone”. 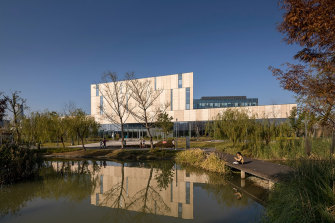 Ningbo’s new library is one of five finalists for the International Federation of Library Associations (IFLA) library of the year. Credit:Schmidt Hammer Lassen Architects 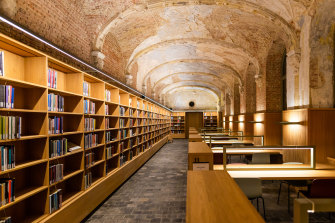 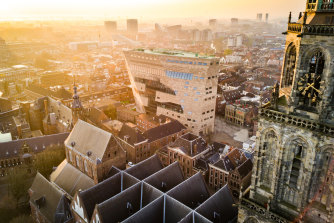 The Forum Groningen in the Netherland is competing against Marrickville’s library for best library in the world 2021. Credit:Deon Prins