New York: Locals describe the area around the Canadian town of Gillam – where murder suspects Kam McLeod and Bryer Schmegelsky are believed to be in hiding – as a harsh and unforgiving place where it would be difficult to survive for long. 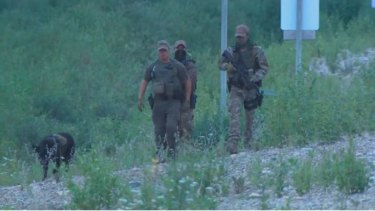 Police officers search for the teens near Gillam, Manitoba.Credit:CBC/Gilbert Rowan

"There is a lot of swamp, bugs, nasty terrain," the town's mayor Dwayne Forman said this week.

Brian Kotak, the managing director of the Manitoba Wildlife Federation, described the area as "intimidating".

"If you don't know that area and you get lost in it, your chances of survival, I think, are pretty slim," he told the Canadian Broadcasting Network. 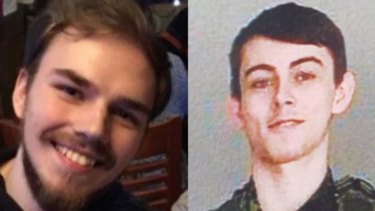 The town describes itself as being part of a "wilderness paradise" because of its many untouched lakes and streams.

It is on the other side of the country to British Columbia, where McLeod and Schmegelsky are alleged to have killed Australian Lucas Folwer, his American girlfriend Chynna Deese and Vancouver man Leonard Dyck.

Many of Gillam's residents are hydroelectricity workers employed at one of the three large nearby generating stations.

A short drive from Gillam is the ghost town of Sundance, built to house the workers employed in the construction of a nearby dam. Once a busy and fully functioning community, it was de-commissioned in the early 1990s after the dam was completed.

Police are understood to be carefully searching the abandoned buildings at the camp in case the suspects are in hiding there.

There is only one road in and out of the town, but there is also a railway station and a small airport that has 13 flights a week to nearby towns.

The limited ways to leave the area have convinced authorities that McLeod and Schmegelsky are still in hiding there, even though the last sighting of them was three days ago.

The men were last seen at a petrol station at Split Lake, a two-hour drive from Gillam.

RCMP have established a check-stop at the intersection of Provincial Roads 280 and 290 which lead into the community.

Bryer Schmegelsky's father Al this week said the two teenagers, aged 18 and 19, would often go out to "play war" in the woods.

"They know how to hide in the woods," he said.