Washington: After closing on the house from The Goonies, Behman Zakeri set the property’s first guideline: Guests are encouraged to do the “truffle shuffle” when entering.

The dance, which Chunk was forced to perform to access the house in the 1985 movie, is not the only nod to The Goonies fans might spot on Zakeri’s new lawn. He also plans to re-create the contraption that opened the property’s gate, which included a bowling ball, a balloon, a chicken and a football. 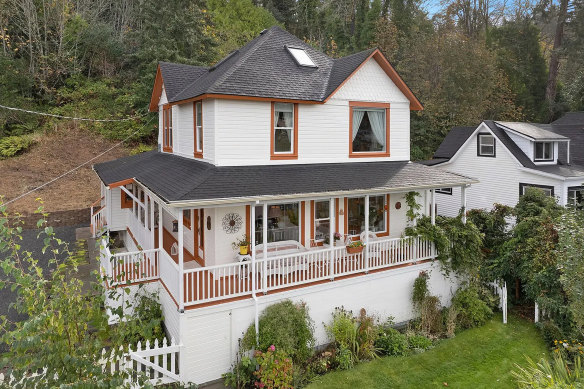 The 1896 Oregon home that features in the Steven Spielberg film “The Goonies”. has sweeping views of the Columbia River flowing into the Pacific Ocean. Credit:AP

Zakeri, a 46-year-old entrepreneur from Kansas, first watched The Goonies at age 8 and has since seen it more than 100 times. The adventure story not only led to some of his favourite childhood memories, but also influenced his work ethic. In buying the Astoria, Oregon, property for $US1.65 million ($2.37 million), Zakeri hopes to preserve the film’s legacy.

“Somebody that was a true ‘Goonie’ needed to have it to kind of make sure that it didn’t go away,” Zakeri said. “If the wrong person buys The Goonies house, what if they do what Troy’s father wanted to do in the movie and bulldoze it and turn it into a golf course or something? Too many people’s hearts would break.”

In the summer of 1985, Zakeri was excited to go to the movies with his family in Overland Park, Kansas – mostly because of the popcorn. When the lights dimmed in the theatre, he soon became engrossed in The Goonies, which features a group of kids trying to protect one of their family’s homes from foreclosure. After finding an ancient map, the children search for treasure. 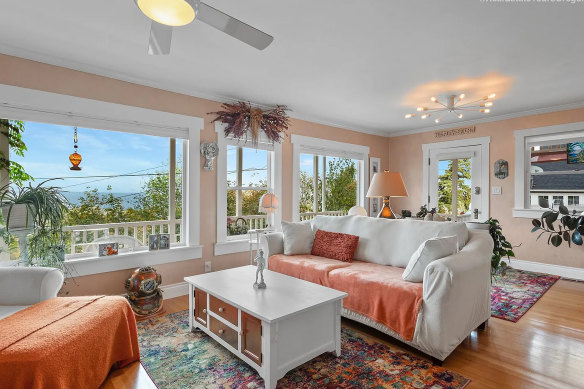 New owner Behman Zakeri is a fan of the classic movie and plans to redecorate the house as it appeared on the screen.Credit:AP

Afterward, Zakeri asked neighbours whether he could search their basements in hopes of locating a secret tunnel leading to treasure. The movie characters’ drive to unearth valuables motivated Zakeri to earn money for his Nintendo games by shovelling snow, mowing lawns and working as a grocery clerk.

In the movie, Walsh discovers a Lou Gehrig baseball card after stumbling upon a skeleton during the treasure hunt. At 14, Zakeri said, he helped sell baseball cards at a store. He now manages a card company, Collector’s Cache, and other businesses related to The Goonies.

One of them, We Buy Gold, deals in gold, silver and platinum jewellery – items Zakeri equates to the movie’s treasure. He also manages an escape-room company, which Zakeri compared to the group navigating caverns in the film.

“Having that relentless pursuit for success, in the case of the movie, it’s finding One-Eyed Willy’s treasure,” Zakeri said. “In business, it’s not going out of business, making money and paying the bills. I applied the same principles in business.” 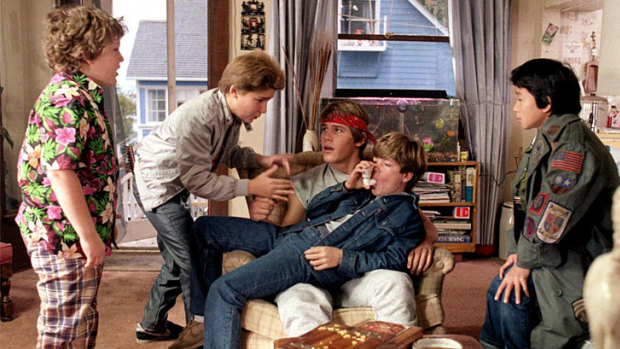 In 2013, Zakeri attended a friend’s birthday party in Portland, Oregon, and learned that the Goonies house wasn’t far away. He and a friend drove nearly 160 kilometres to take pictures in front of the residence, which was built around 1896 and sits near the Pacific Ocean.

Zakeri also toured the two-story home in June 2015, when he visited for the film’s 30th anniversary. He was ecstatic to climb into the attic and sit in the living room.

“Hey, if you ever sell this thing, I’d love to buy it,” Zakeri said he told the owner, Sandi Preston, who bought the property in 2001.

“Yeah, you and a million other Goonies,” Zakeri recalled Preston saying.

In 2015 Preston became so overwhelmed by hundreds of fans turning up at the house unannounced that she covered the windows with blue tarpaulins and erected a sign: “Access Closed to Goonies House”. Sean Astin, who starred in the film as a 14-year-old wrote an open letter to fans telling them to “back off” and to give Preston “room to breathe”.

When the house went on the market in November, Zakeri’s friends showed him the posting within minutes. Zakeri said he messaged Preston: “Remember me? I’m going to make a run at this thing.”

Zakeri called real estate agent Jordan Miller that day and explained his passion for The Goonies. Zakeri called Miller almost every day over the next week for updates. On November 23, six days after their initial call, Zakeri’s phone rang.

“Check your inbox,” he recalled Miller saying. “You’re officially under contract for the ‘Goonies’ house.”

With family at his Overland Park house for Thanksgiving, Zakeri said, he threw his phone across the living room, screamed and jumped on his furniture.

“I couldn’t really imagine much better of a buyer,” Miller said. “There’s been concerns about, ‘Oh, is some big company going to come in and buy it, change a bunch of stuff or try to make money off the house?’ That’s not his vision whatsoever.”

Recognising the film’s themes of companionship, Michael Eakin, Zakeri’s childhood friend, purchased a house next door to the Goonies home. While Zakeri and his wife, Liz, will primarily live in Kansas, he intends to redecorate the Goonies house as it appeared in the movie.

That includes installing a zip line like the one Richard “Data” Wang rode in the movie and painting dark-red trim on the home’s exterior. In the basement, he may build a wax statue of Steven Spielberg, who wrote the film’s story. He hasn’t cemented arrangements, but Zakeri said he wants the house to be a gathering spot for fans.

“I’m just super excited to try to be the best I can be for the Goonies community,” he said.