The chaotic Christmas getaway BEGINS: Furious rail passengers are stranded by CANCELLED trains amid staffing crisis… while car fire grinds traffic to a HALT on M5 as 18MILLION vehicles hit the roads over next two days

The scramble to race home for Christmas before further Covid restrictions are imposed has triggered travel chaos today, with furious rail passengers complaining of train cancellations and a car fire bringing one of Britain’s busiest motorways to a standstill.

More than 18million vehicles will hit the roads today and Christmas Eve to see family and friends over the holiday, with the RAC estimating that 5million alone will head out tomorrow on what is being dubbed ‘frantic festive Friday’.

But CrossCountry last night warned that rail strikes will see a reduced number of trains running tomorrow and on New Year’s Eve.

And travellers using Heathrow Airport on Boxing Day also face issues as it will be cut off from Tube and train links due to engineering works.

Rail passengers this morning complained that trains have been cancelled, with rail operators urging people to get on other services. However, the prospect of packed carriages has sparked fears of a Covid ‘super-spreader’ among travellers.

The scenes could easily lead to a surge in Covid cases and even help to plunge the country further into crisis as Omicron takes hold.

During rush hour, a car fire on the M5 northbound between junctions 19 and 20 near Clevedon brought traffic in both directions to a standstill. There were no reported injuries. The vehicle remains on the hard shoulder of the M5, with emergency services and National Highways teams will assess whether the road needs resurfacing once the car is removed.

The RAC predicted this year will be the busiest Christmas getaway on the roads in five years, with just one in ten polled saying they will use public transport. Major roads are likely to be particularly busy between 12pm and 4pm today, and 11am and 2pm tomorrow.

Gatwick Airport has said it expects to welcome 750,000 passengers between December 18 and 31 – nearly seven times more than over the same period last year. Today and Boxing Day are expected to be among its busiest days, with up to 35,000 passengers each day. Popular destinations include Dublin and Cancun.

Bristol Airport is anticipating it will be used by more than 100,000 passengers between December 21 and 31. One of its busiest days will be December 27 when approximately 12,000 passengers will fly in or out of the airport.

And Liverpool John Lennon Airport said it expects around 40,000 passengers to pass through between Christmas Eve and January 3.

Though the number of people heading abroad is higher than last year, it remains way down on pre-pandemic levels.

Meanwhile, almost one in 20 trains were cancelled on Monday, while eight operators yesterday warned of the likelihood of last-minute cancellations.

And Network Rail said it is conducting signalling, track and HS2 work between Paddington and Slough on Christmas Day and Boxing Day, which means no trains will be able to serve Heathrow.  Other routes affected by engineering work include: 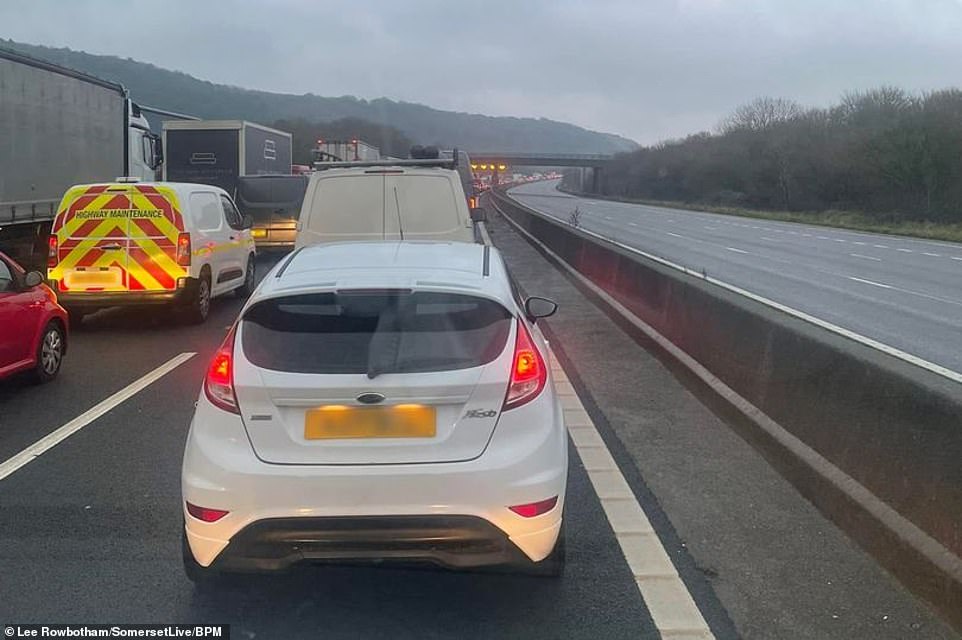 During rush hour, a car fire on the M5 northbound between junctions 19 and 20 near Clevedon brought traffic to a standstill 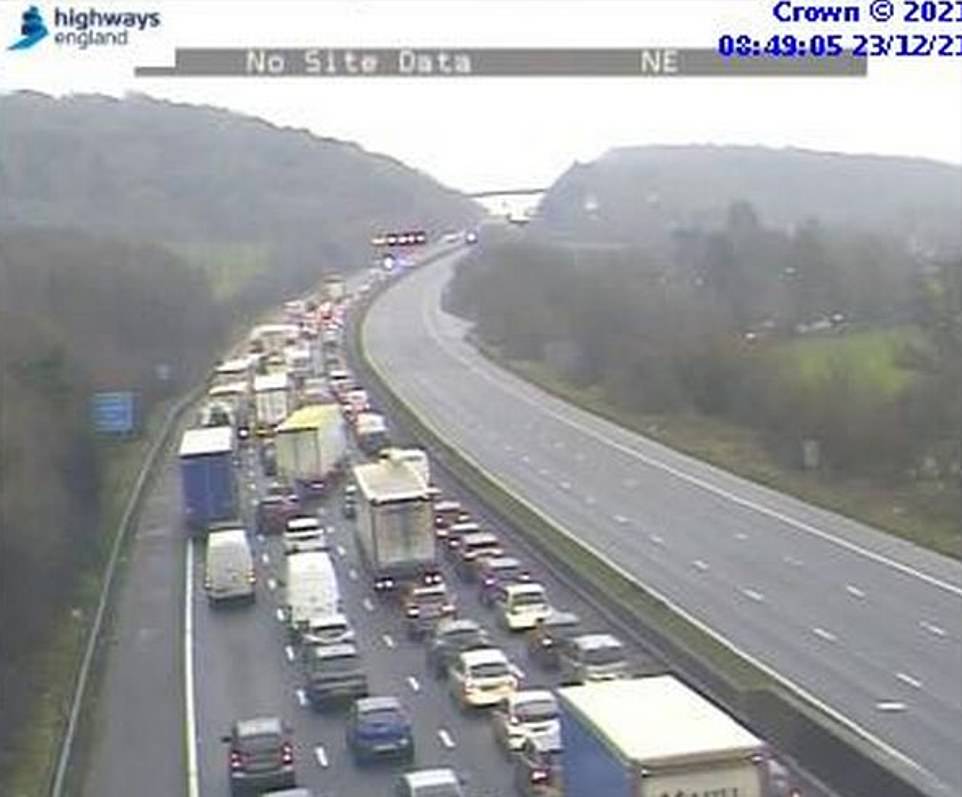 The vehicle remains on the hard shoulder of the M5, with emergency services and National Highways teams will assess whether the road needs resurfacing once the car is removed 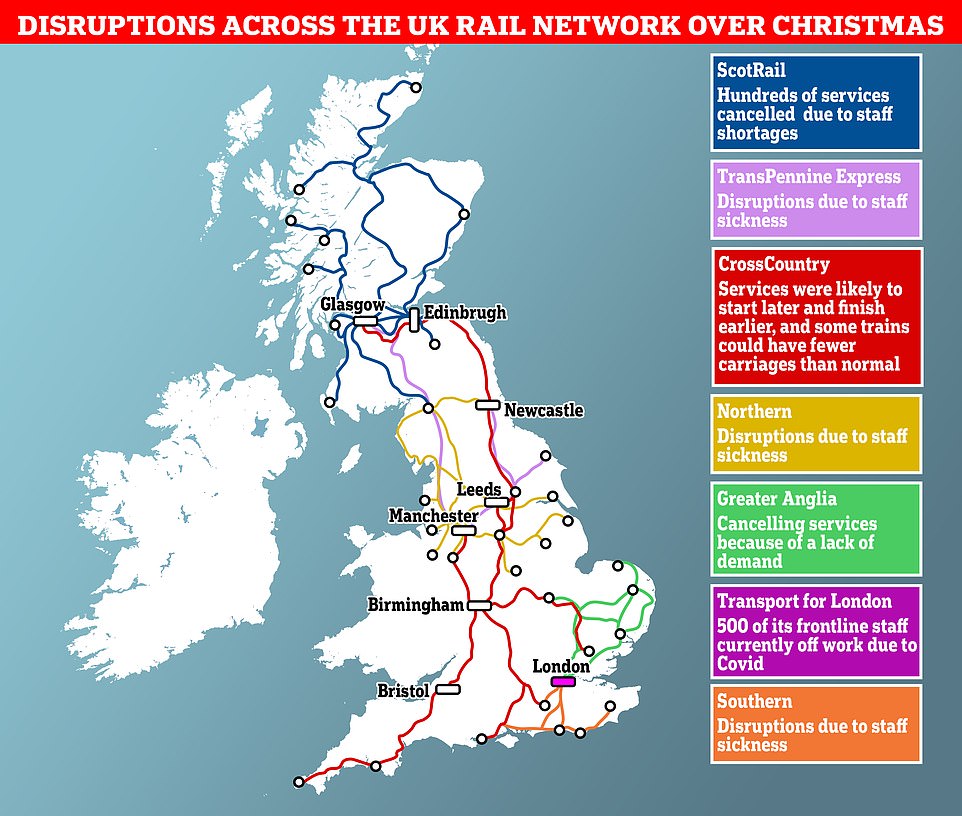 Rail passengers complained that trains have been cancelled, with rail operators urging people to get on other services 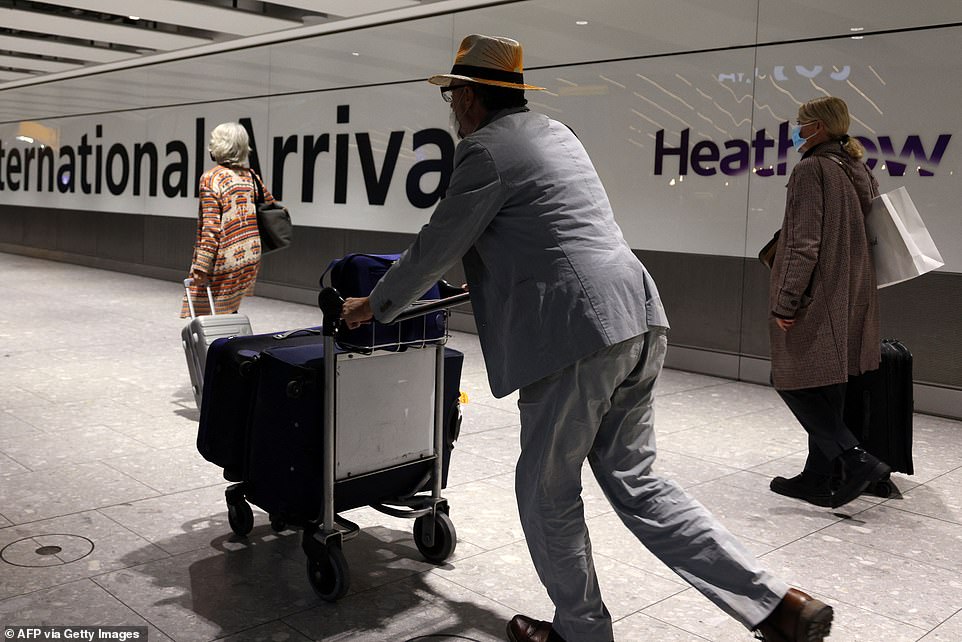 LNER: Between London, Lincoln and Leeds – because of ‘an increased level of absence in drivers and train managers due to coronavirus’

Avanti West Coast: Between London and Scotland ‘subject to short-notice cancellations and alterations due to the impact of Covid-19 on train crew availability’

CrossCountry: CrossCountry said it is ‘expecting widespread disruption to our services this week’, with services likely to start later and finish earlier, and some trains could have fewer carriages than normal

ScotRail: Has cancelled services due to staff shortages

Northern: Has warned of disruption due to staff sickness

Southern: Has warned of disruption due to staff sickness

TransPennine Express: Has warned of disruption due to staff sickness

Greater Anglia: Said it was cancelling services because of a lack of demand

Transport for London: Said about 500 of its frontline staff were currently off work due to Covid

Some 370 engineering projects are also being carried out on the railways in the coming days – leaving Leeds with a reduced service between December 27 and January 3.

The CrossCountry strikes, brought about over an employee training row, will also see no trains between Leicester and Stansted Airport, Cheltenham Spa and Cardiff Central and on some routes in Devon and Cornwall.

Some companies have urged travellers to take earlier trains due to possible upheaval.

Families landing from abroad face being cut off from trains on one of Heathrow’s busiest days of the year and from Tubes for a whole week due to engineering work.

Meanwhile, TfL is suspending the Piccadilly line between Heathrow and Acton Town for seven days from Christmas Eve.

Rail firm LNER, which operates services between London and cities such as Leeds, York, Newcastle and Edinburgh, has taken out 16 trains a day until December 24 due to ‘an increased level of absence in drivers and train managers due to coronavirus’.

The rail operator also said may have to make more cancellations at short notice for staffing reasons.

The UK Rail Delivery Group has said that around one in 20 services were cancelled in the past week – up from an average of one in 40 – with passengers urged to check their train is running before they leave home.

Passengers face being crammed into carriages in the coming days because of reduced timetables caused by staff shortages, raising concerns of an increase in transmission of the virus.

Almost ten per cent of railway staff are off sick or isolating, while TfL says around 500 of its frontline staff are currently off work due to ‘Covid-related illness’.

Train companies have blamed the wave of cancellations on staff sickness and isolation requirements, with almost 9 per cent of staff absent over the last week.  On Monday, 13 per cent of UK trains were either cancelled or delayed.

More than one in 20 trains were cancelled in the seven days before Monday, up from the annual average of 2.9 per cent.

Operators on Tuesday pleaded with travellers to book on to earlier services, while warning of last-minute cancellations in the days ahead.

Train companies say they are taking extra measures to ensure people can get where they need to be, such as running longer trains, cancelling non-safety-critical training to prioritise services, and providing better information about busy trains.

RMT general secretary Mick Lynch said: ‘There has been a systematic attempt by Cross Country to undermine the role of the Senior Conductors and Train Managers by drafting in other staff to do their jobs.

‘Cross Country need to understand that they already have trained and competent guards that are available and ready to work.

‘They need to stop with their underhand measures and attempts to train up various other employees to undertake the role of the guard. This strike could be resolved if people were simply allowed to just get on with their own job and the company stopped threatening the long-term futures of our members and compromising safety as a consequence.

‘Our members have made it clear that they will not put up with this attack and that is why they are taking action over Christmas and New Year. 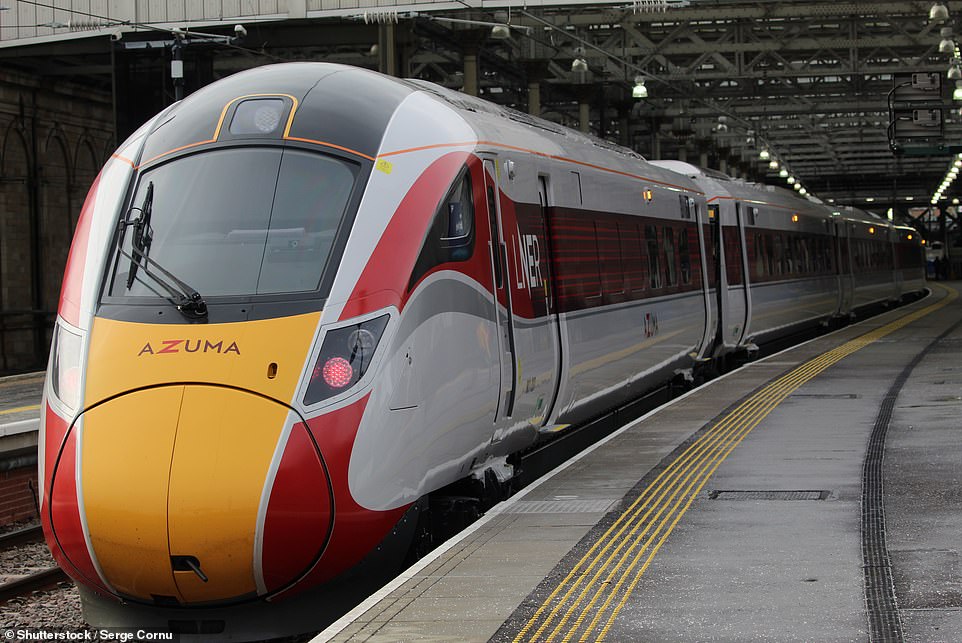 Rail firm LNER, which operates services between London and cities such as Leeds, York, Newcastle and Edinburgh, revealed it had taken out 16 trains a day until 24 Christmas due to ‘an increased level of absence in drivers and train managers due to coronavirus’ 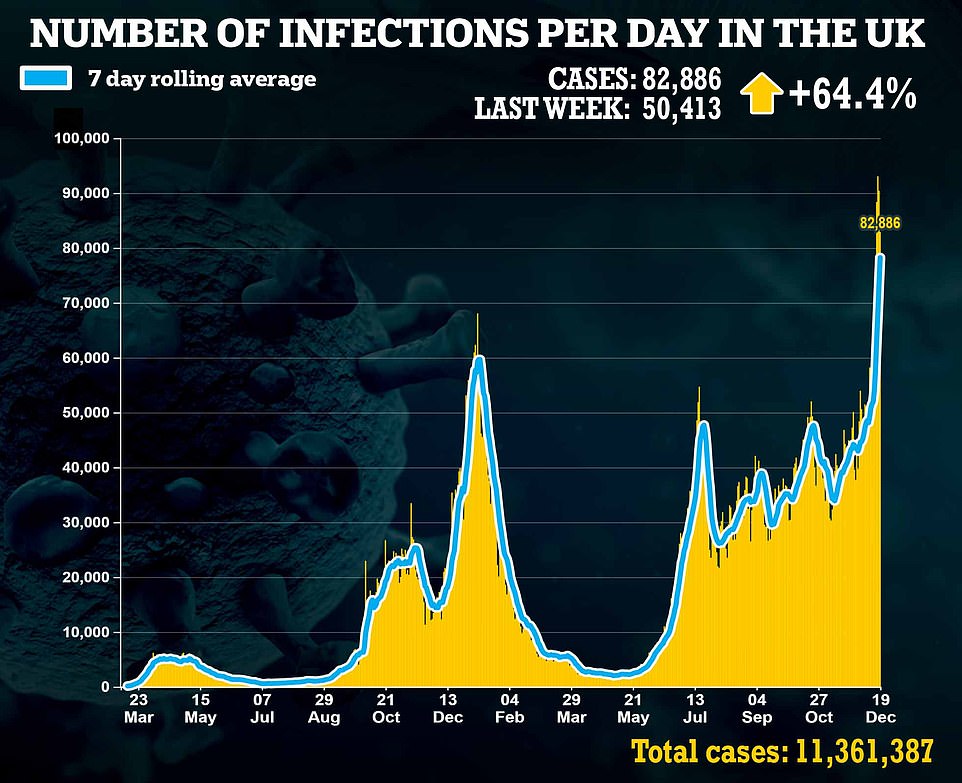 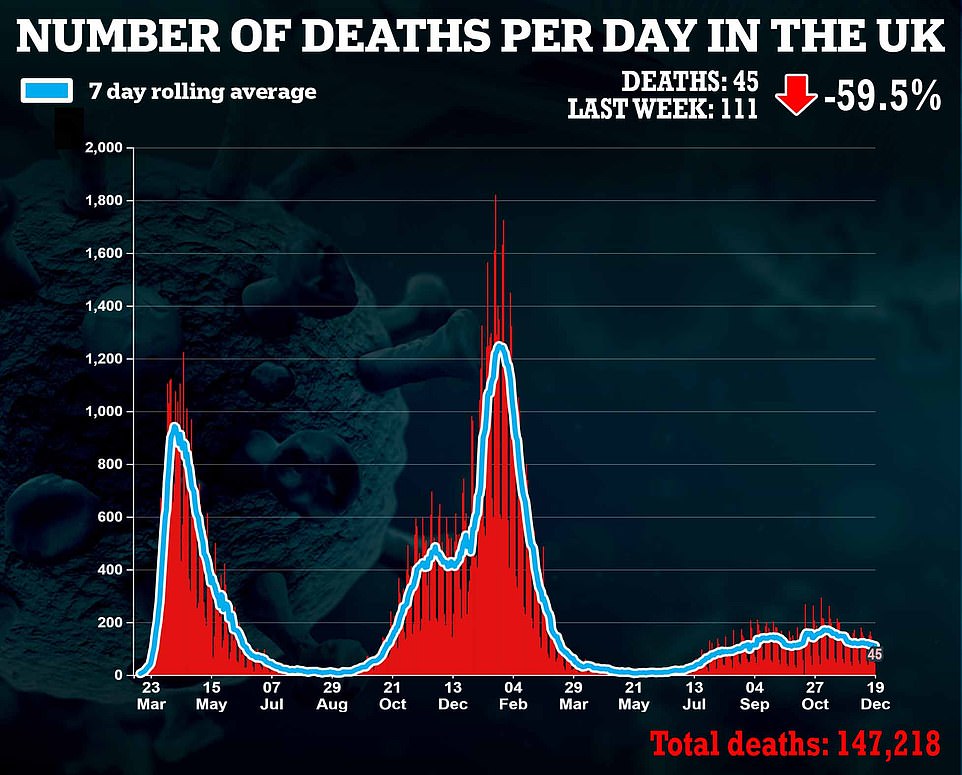 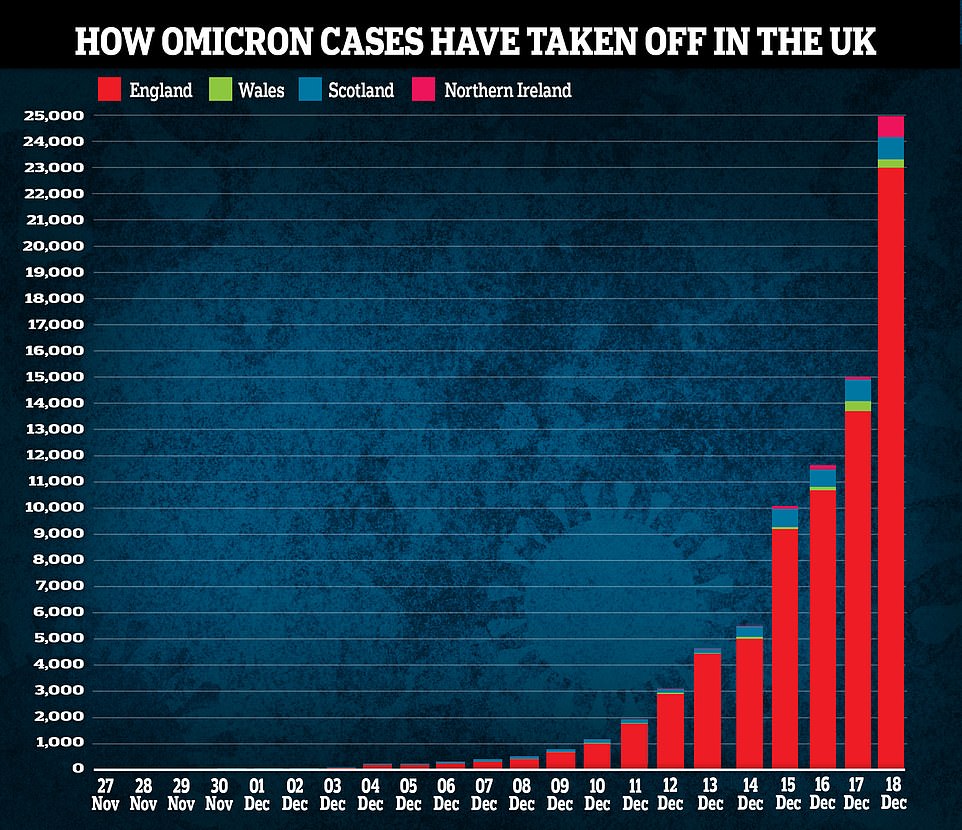 The number of confirmed cases of Omicron in England increased by 69 per cent on the previous day’s total – up 9,427 to 23,168, figures from the UKHSA showed today

Have YOU been affected by Christmas getaway travel chaos?

‘We are in talks today with the company which gives them an opportunity to prioritise safety and settle this dispute.’

Seb Gordon, director of external communications at industry membership body the Rail Delivery Group, told BBC Radio 4’s Today programme that 19 out of 20 trains had still run over the last week and operators are running as many trains as they ‘possibly can’.

He said: ‘We think that, at the moment, that in the Christmas week, when people are trying to get away – fewer people than in a normal year but lots of people still trying to get away – we think it’s important to prioritise running as many trains as we can even if that means there’s a few more of those frustrating short-notice cancellations.

‘But obviously, as we get further into this wave of the pandemic – we hope will not materialise in the way that people are anticipating – it may be that we decide actually we need to prepare for a lower level of staffing over a longer period of time and we will reduce the timetable.

‘Obviously the Government’s announcement today of the reduced isolation period is going to really help.’

CrossCountry said it is ‘expecting widespread disruption to our services this week’, with services likely to start later and finish earlier, and some trains could have fewer carriages than normal.

A spokeswoman for the Rail Delivery Group, which represents train operators, said: ‘Like everyone else, our staff are susceptible to the virus but as we showed last year during the pandemic, we will ensure that key workers can get to where they need to be.

‘We aren’t able to run every train as planned at the moment but we know people want confidence that their train is going to turn up so we will be working hard to give clear, accurate and timely information and people should check before they travel.’

Anthony Smith, chief executive of independent watchdog Transport Focus, added: ‘It’s better for some services to be temporarily withdrawn on a planned basis than to have chaotic last-minute cancellations.

‘These are harder for passengers to deal with and more likely to lead to overcrowding.

‘Passengers need clear, reliable information to plan their journeys. Anyone who has already bought tickets must be told and offered alternatives or their money back.’