Dr Roy Scragg, who died this year at the age of 98, was arguably Australia’s finest public health administrator in the post-war era, and a distinguished scientist of international repute.

Perhaps his most significant contribution to humanity was made during his years as Director of Public Health for the Australian Administration of the then Territory of Papua New Guinea (PNG), from 1957 to 1970. The basic architecture of the health service in PNG was sketched out by the legendary public servant John Gunther but it was Roy Scragg who embellished that architecture and made it happen. 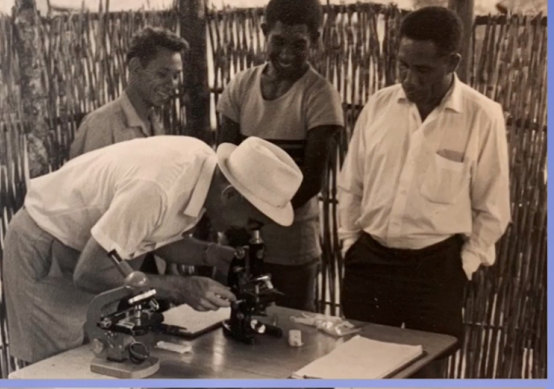 Roy Scragg during his time in PNG.

With a no-frills budget, the entire country was covered with a network of treatment services which addressed the main causes of death. These services included aid posts (equivalent to barefoot doctors), health centres, district and specialist hospitals. In addition, there were systematic programs for the control of the major diseases, tuberculosis, malaria, and leprosy, together with services for mothers and children, dental and other services. In many respects it was a model health service for that context and that era.

Roy Scragg was both an outstanding administrator and a distinguished scientist of international repute in his own right. He attracted medical graduates of high ability to both service and research roles and fostered and encouraged pioneering research into neonatal tetanus, pneumonia, enteritis necroticans (gangrene), kuru (neurological disease), endemic cretinism (congenital deficiency of thyroid hormones) and other conditions of international significance. Many of those who spent some time in PNG went on to become leaders in public health in Australia and internationally.

He met his wife, Elsie Joy Scragg (nee Hann), in the bandage room at the Royal Adelaide Hospital when he was a young doctor and she was a nurse. 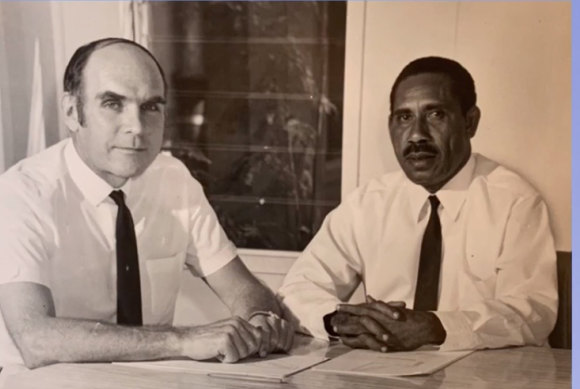 Roy Scragg during his time in PNG.

In addition to his heavy responsibilities in public administration, Scragg also undertook pioneering research on infertility. His demographic and gynaecological studies of childless women in the declining populations in parts of New Ireland from the 1950s, led to the discovery of the role of gonorrhoea in infertility in that region and beyond. In 1975, WHO considered that: “The most complete epidemiological study on the prevalence of infertility, pregnancy wastage, and child loss is that by Scragg on New Ireland in the West Pacific” – work for which he was awarded a Doctorate of Medicine by the University of Adelaide and research which he continued, developed and expanded.

Scragg placed great emphasis not just on recruiting able Australians, but also on training PNG nationals as doctors, nurses, medical assistants, health extension officers (medical assistants), and aid post orderlies, so helping to prepare the PNG health service for future self-government and independence. It is indicative that PNG students were sent to Fiji for training in medicine from the 1960s but it was not until 1983 that Australia’s first Indigenous doctor graduated.

The UN estimates that the crude death rate in PNG declined from 27.4/1000 in 1955-60 to 16.5/1000 in 1970-75, and there is no doubt that Scragg made an enormous contribution to the massive improvement in health that occurred during that time – and laid the groundwork for the further advancements that occurred in later years. 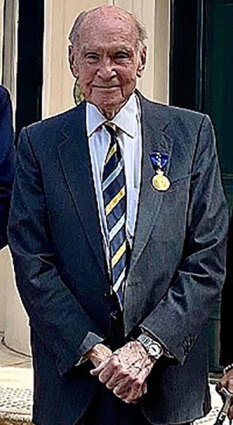 His role in PNG was broader than that of Director of Public Health. He was the foundation professor of Social and Preventive Medicine at the University of Papua New Guinea, a Member of the Legislative Council and executive council of PNG from 1957-64 and a Member of the House of Assembly and Constitutional Committee from 1965-68.

Scragg was a lifelong scholar. He graduated in medicine at Adelaide University in 1946, was awarded a Doctorate in Medicine for his thesis on depopulation in 1955 and made an honorary doctor of the university in 2014. He attended the Sydney School of Public Health, where he earned a diploma of tropical medicine and hygiene in 1950, and master of public health in 1982. His research continued until the last days of his life.

For a man of his extraordinary ability, and scarcely rivalled contributions to public life and to humanity, it is not surprising that Scragg made a continuing and significant and enduring contribution to public life on his return to Australia, as a fellow of the Royal Australasian College of Medical Administrators, president of the Public Health Association of Australia and life member of the Australasian Epidemiological Association amongst other positions. In 1971 Scragg was recognised with an Officer Award from the Order of the British Empire and in 2021 he was appointed a Member of the Order of Australia (AM) to mark his significant contributions to medicine, epidemiology and medical associations.

What set him apart from his counterparts in commonwealth, state and territory health departments, was his extraordinary ability to marshal, plan and direct a framework of health services geared to improving the health of the population. He did so by blending his extraordinary abilities with public health knowledge, administrative flair, and outstanding scientific aptitude. And he did so with very limited resources. Australia now, more than ever, needs people of his ilk to guide and direct its health services in troubled times.

Roy Scragg was one of Australia’s great men but his achievements, while recognised internationally, are not at all that well known in Australia. Much of his life’s work was in an almost forgotten, but important era when Australia was the colonial power for PNG. Colonialism often has a bad name and rightly so, but some individuals, and Scragg in particular, made an outstanding contribution to improving the lives of PNG citizens and in preparation of the PNG health system for self-governance and independence.

Scragg is survived by his children Robert, Peter, Alison and Ian, grandchildren and great-grandchildren. His wife predeceased him by a few months.