TERRIFYING video captured by a passenger on an aircraft taking off from Honolulu, Hawaii, shows what appears to be flames outside of the cabin window as the pilot is forced to make an emergency landing.

The Atlas Air flight was a military chartered flight taking off from Hickam Air Force Base on Saturday night, when the plane had to head to Daniel K. Inouye International Airport following a mechanical issue with one engine. 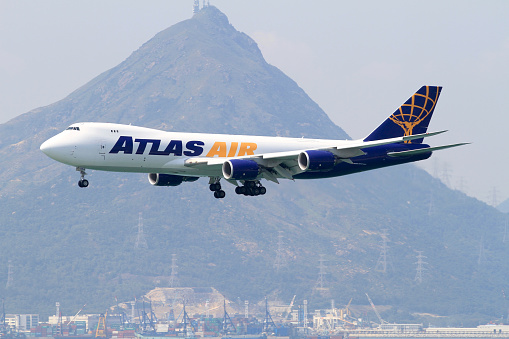 The passenger video, posted on Twitter, shows a dark cabin and then a bright flash of light outside the window.

"So our plane almost blew up just now leaving Hawaii," the passenger tweeted, according to ABC13.

A muffled explosion can be heard on the B767 plane, which was headed for Guam and had 212 people on board.

The plane was also captured on camera from the ground, by Twitter user @itsrichard_e, who wrote: "Plane on fire over the Daniel K. Inouye airport in Honolulu. We heard what sounded like an explosion and it started spitting out flames from what looked like the engine."

According to the AvHerald, the aircraft took off runway 08R.

During the initial climb the crew declared an emergency on the tower frequency, reporting a right-hand engine failure, due to repeated engine surges/compressor stalls.

The crew said the engine was emitting bangs and streaks of flame.

The aircraft stopped its climb at 2000 ft and the engine was shut down after the crew performed a severe engine damage checklist.

No injuries were reported aboard the flight.

The incident is under investigation.