Team Theresa May plots revenge on Boris Johnson: As another torrid week looms, the Mail On Sunday’s political editor reveals the PM’s predecessor is among Tories scenting blood

As Tory MPs gathered in sombre huddles on Wednesday to dissect Boris Johnson’s Commons mauling over ‘Partygate’, allies of Theresa May moved among them like undertakers.

‘It’s time to send the letters,’ said one senior figure from Mrs May’s Government, referring to the process by which Tory MPs trigger a leadership election.

When Mrs May was in Downing Street, she likened the troublesome Mr Johnson to a dog that ‘was put down when its master decided it wasn’t needed any more’. Since he succeeded her in No 10, she has seethed on his backbenches, making increasingly outspoken criticisms over issues such as Brexit, Covid restrictions and his ‘ill-judged and just plain wrong’ performance over sleaze.

Now, in the wake of the ‘Partygate’ rows over alleged breaches of Covid rules in No 10 a year ago and the ‘Wallpapergate’ saga about the cost of decorating the No 10 flat – and with a potentially disastrous defeat looming in Thursday’s North Shropshire by-election – Mrs May’s friends can scent blood. 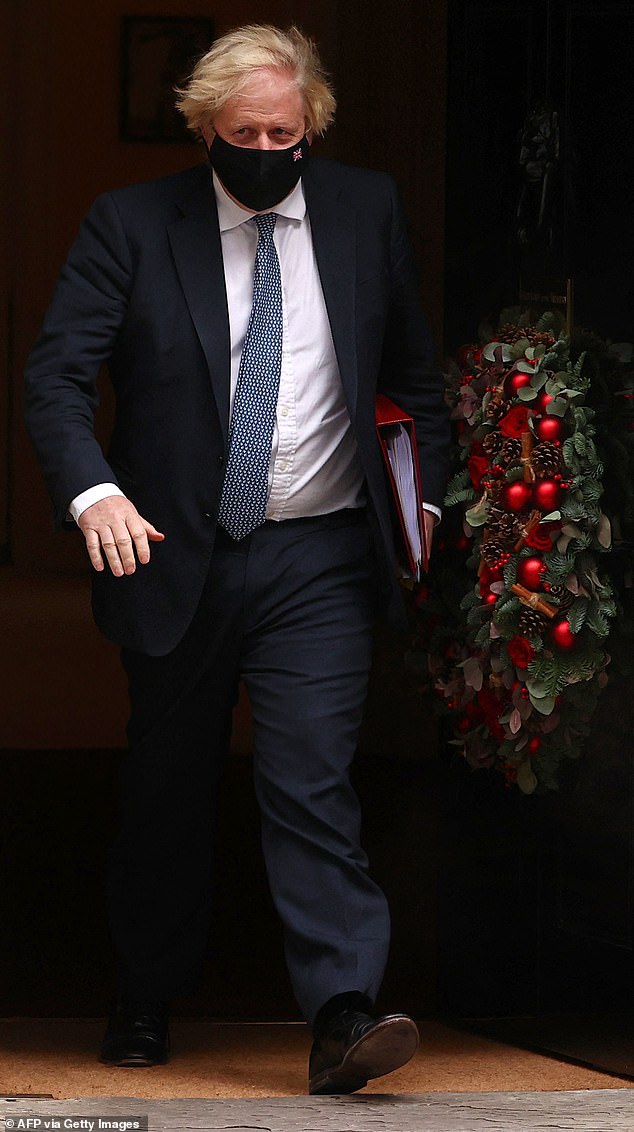 When Mrs May was in Downing Street, she likened the troublesome Mr Johnson to a dog that ‘was put down when its master decided it wasn’t needed any more’

While her former No 10 chief of staff Gavin Barwell has complained publicly about ‘selfinflicted wounds’, her loyalist MPs have been touring the Commons to lobby for a change of leadership.

Although the rebels are still a long way short of the 56 letters to Sir Graham Brady, chair of the backbench 1922 committee, which are needed to trigger a contest – estimates vary between five and the ‘low teens’ – the Prime Minister faces another brutal week.

On Tuesday, more than 50 Conservative MPs are expected to rebel in a Commons vote on new Plan B Covid restrictions, including vaccine passports. Then Mr  Johnson faces the possible loss of a near-23,000 majority in the vote called as a result of Owen Paterson’s resignation over lobbying allegations. And all this just days after the birth of his second child with wife Carrie.

‘They have been waving the letters around, saying “It’s time”,’ said one source. ‘They are poised, waiting for Thursday.’ There is no suggestion that their actions are being condoned by Mrs May. 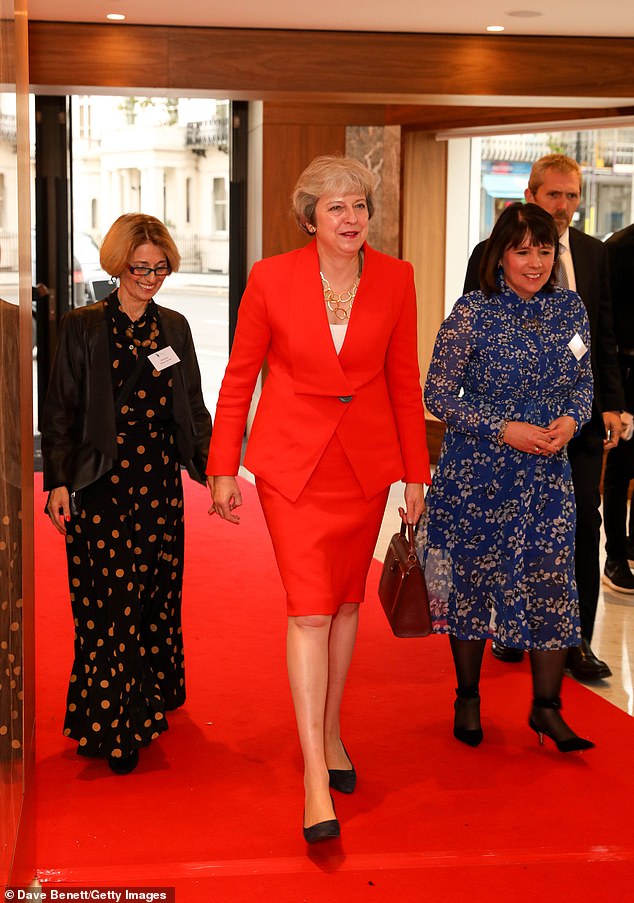 Now, in the wake of the ‘Partygate’ rows over alleged breaches of Covid rules in No 10 a year ago and the ‘Wallpapergate’ saga about the cost of decorating the No 10 flat – and with a potentially disastrous defeat looming in Thursday’s North Shropshire by-election – Mrs May’s friends can scent blood

Mr Johnson was mortified by last week’s leak to ITV News of a mock press conference showing Downing Street staff giggling about a ‘cheese and wine’ event on December 18, 2020, despite days of denials that there had been a party at a time when indoor gatherings were banned. He was forced to apologise to Parliament before his weekly duel with Labour leader Sir Keir Starmer at Prime Minister’s Questions, and hours later, Allegra Stratton, the spokeswoman caught on the video, resigned in tears on her doorstep.

Senior Tories say privately that they are convinced that vengeful former No 10 adviser Dominic Cummings is playing some form of role in the crisis by feeding damaging material about Mr Johnson, through intermediaries, to the Labour Party – which has then placed them with friendly media outlets.

They argue that he is motivated by the hope that Mr Johnson will be toppled and replaced by Chancellor Rishi Sunak, who would then offer Mr Cummings a path back into Government. Cummings allies dismiss this as ‘paranoia’, while the Treasury pours scorn on the prospect of a return for him under a Prime Minister Sunak.

However, there is an undeniable element of political symmetry to the fact that the first alleged party was said to have been held on November 13, 2020, by the Prime Minister’s wife, Carrie, to mark the ousting of her rival Mr Cummings from No 10.

The claims were first reported two days later by The Mail on Sunday, which published the claim that after Mr Cummings had carried out his belongings in a cardboard box, former colleagues still in No 10 had ‘heard the distinctive strains of a victory party from the Downing Street flat inhabited by Carrie’. Her friends denied that there had been a celebration.

No 10 insiders now fear that an investigation already being conducted by Cabinet Secretary Simon Case into the social events of a year ago could be extended to the night of November 13, taking the row directly into the PM’s living quarters.

Mr Sunak already has a readymade campaign chief in the form of adviser Liam Booth-Smith, one of the few Cummings appointments to still hold a key position in Government

The Case investigation comes on top of a separate row after an official report revealed that the Prime Minister had texted Tory donor Lord Brownlow asking for more money to refurbish the No 10 flat, despite having previously assured Lord Geidt, the Independent Adviser on Ministers’ Interests, that he did not know who was paying for the £112,549 refurbishment.

Party nerves started jangling even more after polls taken after the rows broke out showed Labour up to eight points ahead of the Tories. And a survey for yesterday’s Daily Mail revealed that a third of the public are now less likely to follow Covid rules in the wake of the Downing Street party row, while two in three people said they do not trust the Prime Minister.

Mr Johnson’s most likely successors are now openly taking soundings among their colleagues.

Mr Sunak already has a readymade campaign chief in the form of adviser Liam Booth-Smith, one of the few Cummings appointments to still hold a key position in Government. Mr Booth-Smith, the former head of Mr Cummings’s joint economic unit at No 10, was furious to be accused of being the so-called ‘chatty pig’ who told BBC political editor Laura Kuenssberg that there was ‘a lot of concern’ about Mr Johnson last month.

The Treasury flatly denied the claim, saying Mr Booth-Smith had been ‘stitched up’.

Since then, Mr Sunak, as part of a delicate operation to appear loyal to the Prime Minister while simultaneously developing his own political ‘brand’, has allowed it to become known that he favours a 2p tax cut before the next election – a move to appeal to the Tory base, and to those MPs who entered the Commons in 2019 by winning the Red Wall seats, mainly in the North, that had previously been Labour strongholds. The Government’s ‘levelling up’ agenda, which involves billions of pounds being directed towards their constituencies  necessitates close contact with the Chancellor’s team.

Ms Truss has been wooing female ‘Red Wallers’ with ‘Fizz with Liz’ nights at 5 Hertford Street, a £2,850-a-year private members’ club in Mayfair.

A WhatsApp group set up by Tory MPs, called ‘Liz for Leader’, was disbanded after being revealed by this newspaper.

Other likely candidates include Health Secretary Sajid Javid, who can boast about being in his sixth Cabinet post, Education Secretary Nadhim Zahawi, Home Secretary Priti Patel, former Health Secretary Jeremy Hunt – who lost out to Mr Johnson in the 2019 contest – and Foreign Affairs Committee Chairman Tom Tugendhat. Some sources even tip Matt Hancock, who was forced to resign from the Cabinet in June, to throw his hat into the ring.

One Tory MP told The Mail on Sunday that Mr Johnson was facing a ‘critical’ few days.

The MP said: ‘Don’t underestimate the seriousness of this for Boris. I have been asking colleagues if they are putting a letter in. They are very shifty when they reply, but it looks as if many will hold off until Thursday’s result.

‘I voted for Boris because the Brexit situation meant the Tories really could split. And he delivered on that – he delivered Brexit in a very recognisable way.

‘We all knew his faults: no moral fibre, lack of attention to detail and so on, but we hoped that he would place a strong team around him, as he did when he was London Mayor, which would address that.’

The MP added: ‘We didn’t want Cummings in there, but to be fair to him he did provide a spine at No 10. It’s not just new Red Wall MPs who are nervous. The old-timers are, too.’

A former Cabinet Minister agreed that the situation was ‘serious’, saying: ‘The Red Wallers have protected Boris because they think they owe their seats to him, but he now risks losing them because they are starting to feel that he is a liability, not an asset.

‘Boris is a fair-weather PM – fine when things are going well, less so in difficult times.

‘If he is going to be a happy Captain Kirk, he needs a lot of serious Spocks around him to steer the ship away from the rocks.

‘And I don’t see many pointy-eared people in No10 just now.’