More than four in five teachers and principals in Australian government schools say NAPLAN has failed to improve student outcomes and raised stress and anxiety in the classroom.

With education ministers set to meet on Friday to debate overhauling NAPLAN, the Australian Education Union has released results from a survey of more than 12,000 members that found overwhelming antipathy to the standardised test. 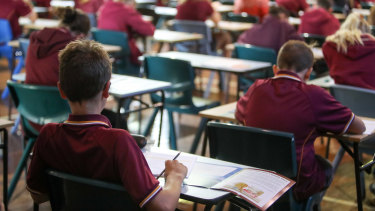 NAPLAN could be replaced by a new expanded test next year. Credit:Adam McLean

Seventy-five per cent of them said NAPLAN was not an effective measure of school performance or an effective way to compare schools.

The teachers' union called for NAPLAN to be dumped.

Its federal president Correna Haythorpe said the results proved most teachers in public schools had no confidence in the test's ability to measure and compare students' literacy and numeracy progress.

“Teachers and principals regard NAPLAN as a major source of student stress and anxiety, not benefiting student outcomes, and wasting valuable face-to-face teaching time in the classroom,” Ms Haythorpe said.

“NAPLAN reduces student progress to a number on a spreadsheet – it does not take into account teachers’ informed judgment, or the daily learning that occurs in the classroom,” Ms Haythorpe said.

Three states including Victoria commissioned a breakaway review of NAPLAN last year, arguing it is no longer fit for purpose.

All federal, state and territory ministers were handed a report from the breakaway review last week and are scheduled to discuss its findings and recommendations at an education council meeting on Friday.

If the review's recommendations are adopted, NAPLAN will be replaced by a new, broader test called ANSA by 2022, which will assess student's skills in science, technology and creative and critical thinking as well as literacy and numeracy.

The AEU has already stated its opposition to overhauling NAPLAN, preferring to see it dumped entirely.

Federal Education Minister Dan Tehan wants states to persevere with NAPLAN, arguing they should see through the transition to an online test before changing it.

"The problem we’ve got at the moment is everyone is blaming NAPLAN for the fact that our results are flatlining," Mr Tehan said on Sydney radio station 2GB this week.

"That’s like blaming a thermometer for you having a temperature."

Mr Tehan said governments should concentrate on getting the curriculum right, raising numeracy and literacy standards and supporting teachers and principals.

But he said some of the ideas in the breakaway review have merit, such as bringing forward the time the test is sat from May to earlier in the school year and getting results back to schools within days instead of months.

Our weekly newsletter will deliver expert analysis of the race to the White House from our US correspondent Matthew Knott. Coming soon. Sign up now for The Sydney Morning Herald‘s newsletter here, The Age‘s here, Brisbane Times‘ here and WAtoday‘s here.