Remnants of a tropical hurricane barrelling over the Atlantic Ocean are set to drench parts of Britain with nearly a foot of rain in the next few days – prompting a ‘danger to life’ flood warning.

Met Office warnings have been issued from today until Sunday, covering Wales and North West England, with the worst-affected areas getting up to 250mm (10in) of rain between today and Saturday – which is also Halloween.

Further ‘significant’ rainfall is expected on Sunday, following a month which has already seen the UK’s wettest day since records began – when an average of 31.7mm (1.25in) of rain fell across the country on October 3.

The deluge is coming from the remains of Hurricane Zeta, which is on its way north-east from the Gulf of Mexico. Flooding could potentially affect rivers within Wales, plus the Wye and Severn including downstream in England.

The conditions could see Wales and Cumbria break records for October rainfall – and the Met Office said homes and businesses could be flooded, while ‘fast flowing or deep floodwater is possible, causing a danger to life’. 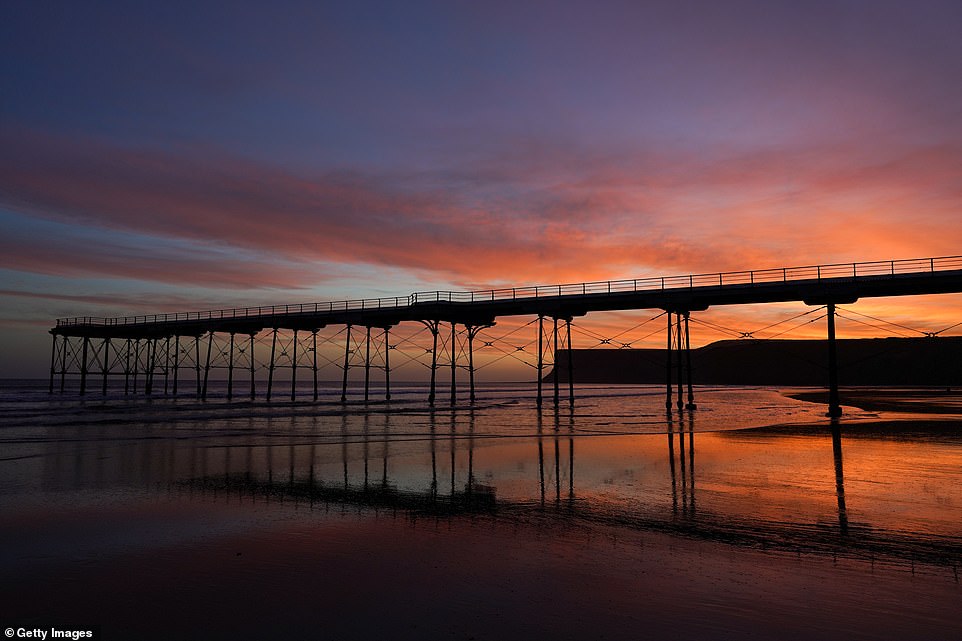 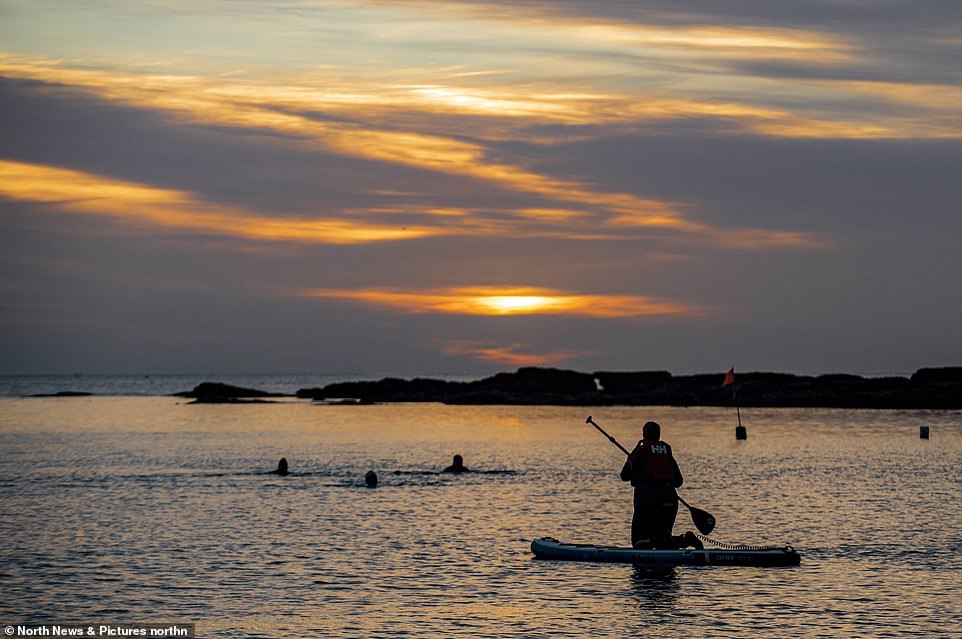 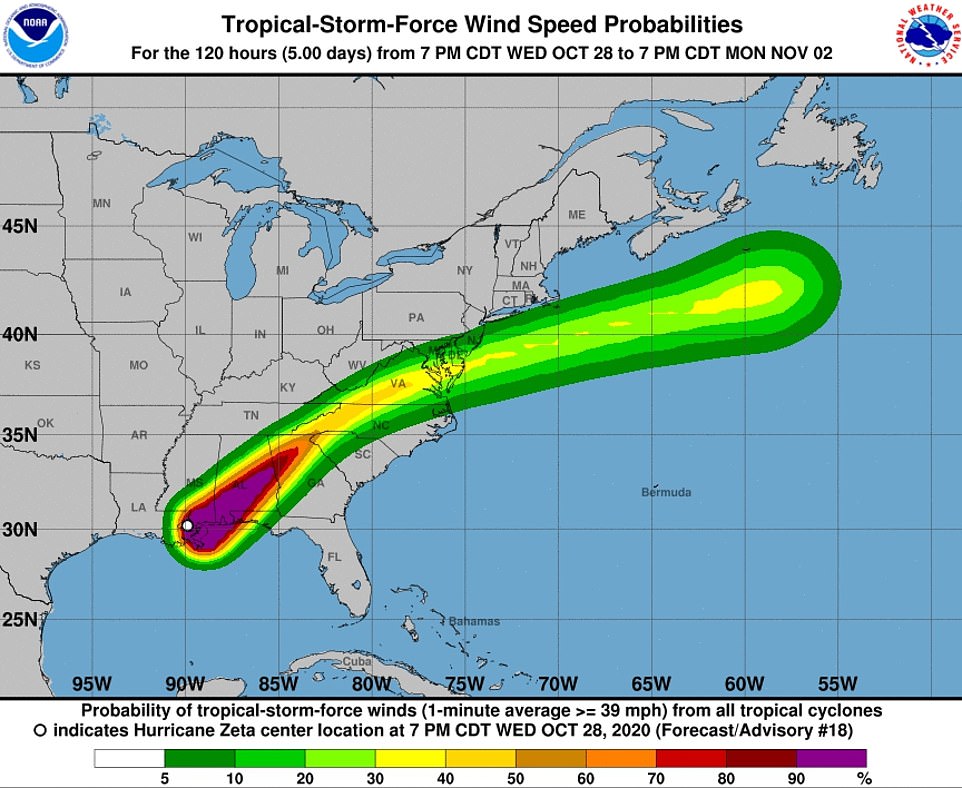 Met Office spokesman John Griffiths said: ‘The rain is going to affect areas of the country which were hit by flooding in February, some of which are still recovering.’

The first weather warning lasts between 9am today and the end of tomorrow, for heavy rain and gales. The worst areas on Wales and Cumbria are set to receive 100mm (4in) to 150mm (6in) of rain.

A second warning lasts through Saturday, bringing up to another 100mm (4in) over the worst-affected hills and mountains, 60mm (2.4in) elsewhere on high ground and 25mm (1in) elsewhere. 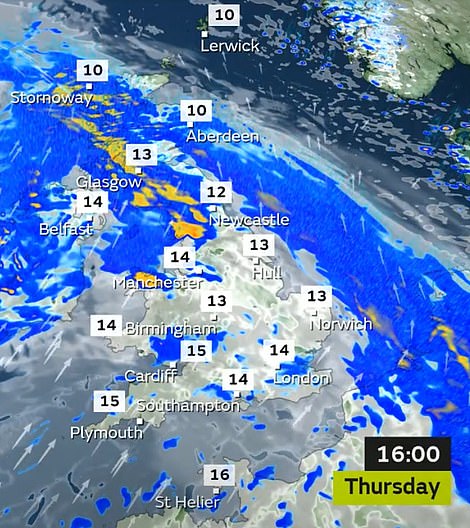 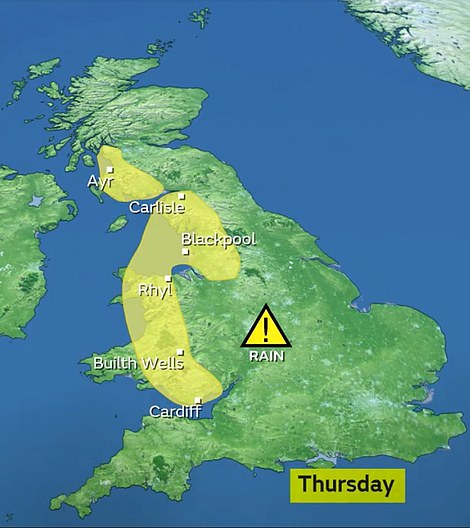 Heavy rainfall is expected to fall in Wales and North West England today, where weather warnings have been imposed (above) 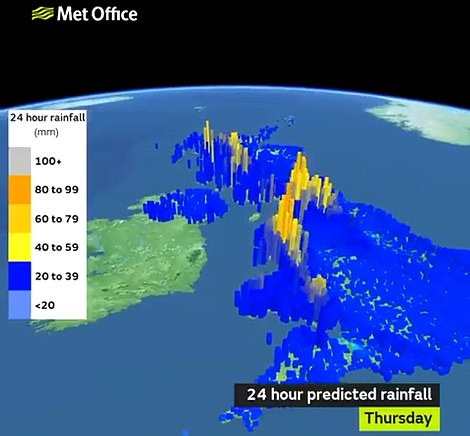 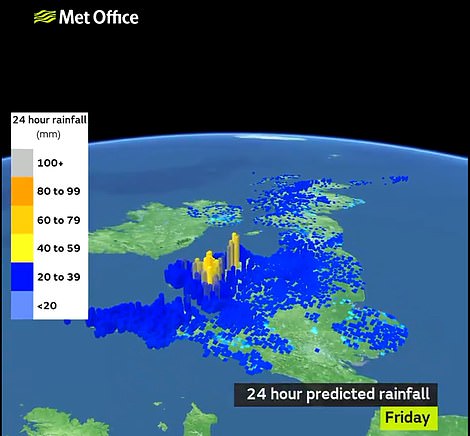 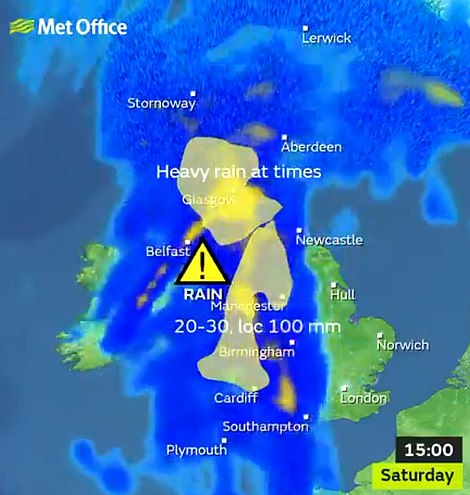 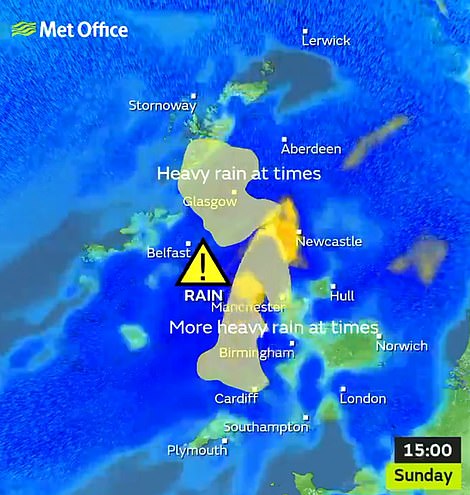 The last warning covers through most of Sunday, when ‘prolonged spells of heavy rain are likely across Wales and northwest England’.

Fiery sunrise is a red alert before heavy rain arrives

It was a truly spectacular sunrise to warm the soul of anyone lucky enough to see it.

But the old adage ‘red sky in the morning, shepherd’s warning’ proved all too true as heavy rain soon spoiled the stunning view over Kilbarchan, Renfrewshire.

According to the Met Office, a red sunrise happens after areas of high pressure – and the good weather – have moved on towards the East.

Often, they mean a low-pressure front is following on behind – along with the wind and rain. So for shepherds and anyone else planning to spend time outdoors, they really are a red alert. 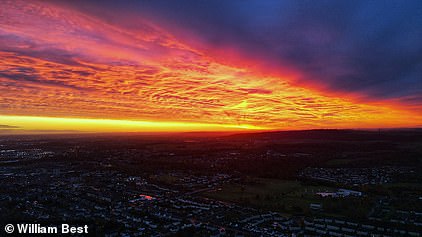 The Met Office said: ‘Homes and businesses could be flooded, causing damage to some buildings; fast flowing or deep floodwater is possible, causing a danger to life. Some communities may be cut off by flooded roads.’

Forecasters also warn of possible power cuts and transport delays and disruption. The problems could be exacerbated by fallen leaves blocking drains and gullies.

Heavy rain is also expected to fall elsewhere across the country today, Saturday and Sunday. The only respite is due to be tomorrow, when eastern, central and southern areas are set to be mostly dry and bright.

Road operator Bear Scotland had already announced that the A83 at the Rest and be Thankful in Argyll – hit by a landslide in August – will remain closed overnight until late November.

This is because of fears of the risk of further movement in the mountain above the road. A diversionary route will be available from 6pm each night via the Old Military Road.