‘How are you NOT a Grinch?’: Susanna Reid clashes with rail baron Mick Lynch as GMB host accuses him of ‘deliberately’ disabling the entire rail network for TEN DAYS over Christmas

The pair clashed on ITV’s Good Morning Britain when the broadcaster told the RMT chief that the British public will be badly hit by the industrial action.

The RMT yesterday announced four 48-hour strikes between December 13 and January 7, forcing many revellers to cancel parties and shoppers to stay at home instead.

There will also be a ban on overtime working from December 18 to January 2. This will hit services on Sundays and other key dates such as Christmas Eve, Boxing Day and New Year’s Eve, when many travel to be with loved-ones and friends.

Ms Reid told Mr Lynch: ‘There will be passengers earning a lot less who won’t be able to get to work or get home. How are you not the Grinch who is stealing Christmas?’

Mr Lynch has been forced to repeatedly deny that he is ‘the Grinch’, and today insisted he does care about the British public and denied he is ‘holding the country to ransom’.

Susanna said: ‘Your issue is with the Transport Secretary, who on this programme you called a liar – I mean good luck with that meeting in the morning. The fact of the matter is it is train passengers who are going to pay the price in the run up to Christmas.’ 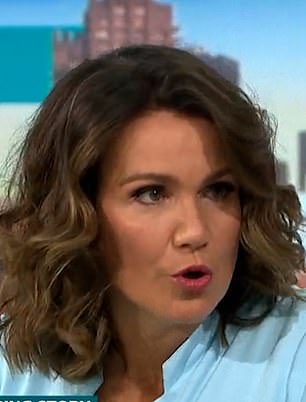 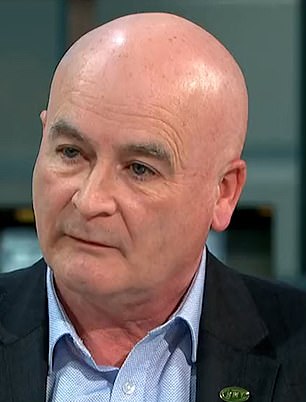 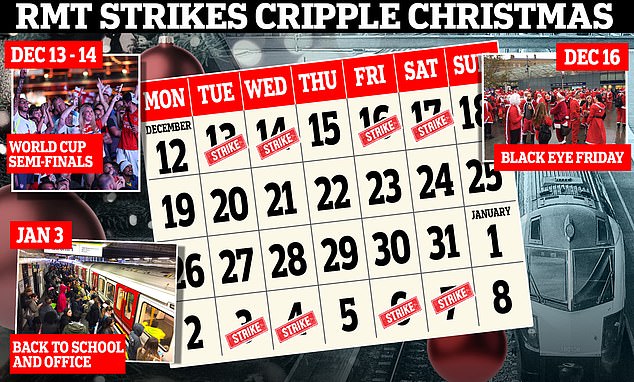 Mr Lynch then accused her of talking over him and said: ‘You’ve asked me a question, let me answer’.

He said: ‘Every day is sensitive, there’s no good time to have a strike. We’ve deliberately left the Christmas period strike free. We cannot leave this action to go cold. We’ve not been on strike for two months.

Who is going on strike and when?

Civil servants:  Around 100,000 civil servants have voted for a national strike over pay, pensions and jobs, the PCS union has announced. The dates are TBC.

Nurses: Strikes are expected to begin in early December and could take place over two dates, potentially a Tuesday and a Thursday. They could last until early May 2023.

Rail workers: Drivers working for 12 British train operators will go on strike on November 26 in an ongoing dispute over pay.

‘We moved other dates to facilitate important public and national events. If we just leave it they’ll impose the changes.’

He added: ‘Network Rail have already issued statutory redundancy notices for 3,000 jobs and they will impose that if we do not resist what they’re doing and come to a compromise.

‘A meeting on Monday was cancelled with 55 minutes’ notice. We’ve had no new offer since the middle of the summer’.

Susanna questioned his claim that the RMT had left the Christmas period free, saying that he might as well have called two five-day strikes because of the wider disruption.

Many viewers sided with the GMB host.

One said: ‘Totally agree with Susanna. If the RMT want sympathy and support from us, which is a fair request from them, then please stop botching up our lives first. It is counter productive.

Another tweeted: They are losing public support fast and will definitely do so with this Christmas disruption’.

A third critic said: ‘My daughter works for the NHS, working in a children’s hospital. The only way she is able to do this on strike days is stay in a hotel which she pays for and claims back from the NHS. Well done RMT’.

The RMT yesterday announced four 48-hour strikes between December 13 and January 7, forcing many revellers to cancel parties and shoppers to stay at home instead.

There will also be a ban on overtime working from December 18 to January 2. This will hit services on Sundays and other key dates such as Christmas Eve, Boxing Day and New Year’s Eve, when many travel to be with loved-ones and friends. 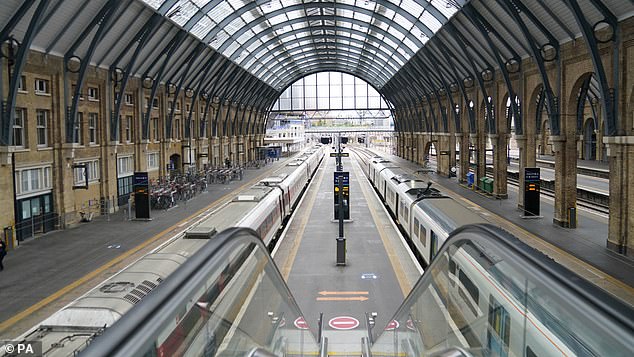 The latest RMT action will see more than 40,000 workers at Network Rail and 14 train operators walk out for 48 hours on December 13 and 14. Pictured: Empty platform and stationary trains at Kings Cross station in London during strikes on October 5 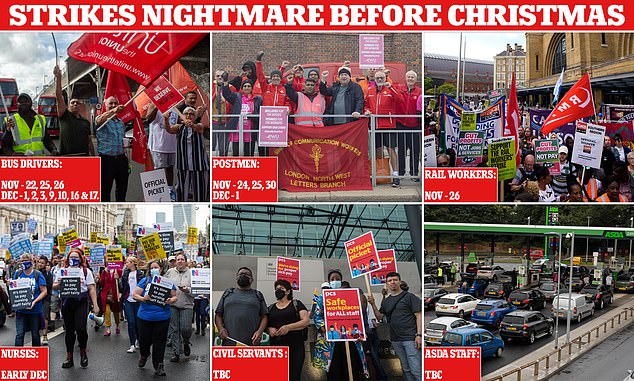 Britain is facing a winter of discontent after 100,000 civil servants voted to strike as comrades on the rail network agreed new dates and nurses decided on taking industrial action for the first time in more than a century.

The British economy will lose hundreds of millions of pounds when the UK is already in recession, with shopping trips cancelled, parties axed along with festive trips to pantomimes and shows also under threat.

The carefully chosen dates will disrupt people going out to watch the final week of the World Cup, as well as Friday December 16, known as ‘Black Eye Friday’ because it is the busiest night of drinking before Christmas. After Christmas the return to work and school will also be hit by four strike dates in January.

Ministers will hold talks with rail union chiefs this week to urge them to call off strikes aimed at causing ‘maximum disruption’ over Christmas.

Work and Pensions Secretary Mel Stride said: ‘What we need is we need more talking from the unions with the employers and less announcements of strikes.’

He said the consequences of the strikes announced by the RMT union in December and January would be ‘quite serious’, disrupting ‘medical appointments, for example, as well as the ‘family reunions’ taking place over the festive period.

‘The timing of these strikes are designed to create maximum disruption across the Christmas period,’ he said.

Mr Stride told TalkTV: ‘The Secretary of State is actually meeting the rail union leaders later this week, so there is that dialogue occurring.

‘The essential discussions have to occur between the rail operating companies, Network Rail and the unions, and they really should be engaging more on that and working things out between them more vigorously, in my view, than simply rushing off and going into strike action.’

The Government remains committed to plans to impose minimum service levels during strikes by transport workers, Cabinet minister Mel Stride said, although no timetable had been set out for the legislation.

The Work and Pensions Secretary told Sky News: ‘The Government has commitments in that area and to minimum service provision.

‘In due course, I have no doubt that will come forward and I do think it’s important, because we shouldn’t be left in a position with certain services – such as railways , where we have such an acute dependence upon them for a variety of reasons – where the plug can be pulled on the whole thing.’

Susanna Reid displays her 1.5 stone weight loss in a glamorous photoshoot as she recalls flirty encounter with David Beckham

She recently lost 1.5 stone after a ‘lockdown slump’ saw her put on a few pounds amid the pandemic.

And Susanna Reid showcased her incredible figure as she posed for a glamorous photoshoot with woman&home.

The 51-year-old presenter wowed in a series of figure-hugging ensembles for the spread before opening up about a flirty encounter with David Beckham. 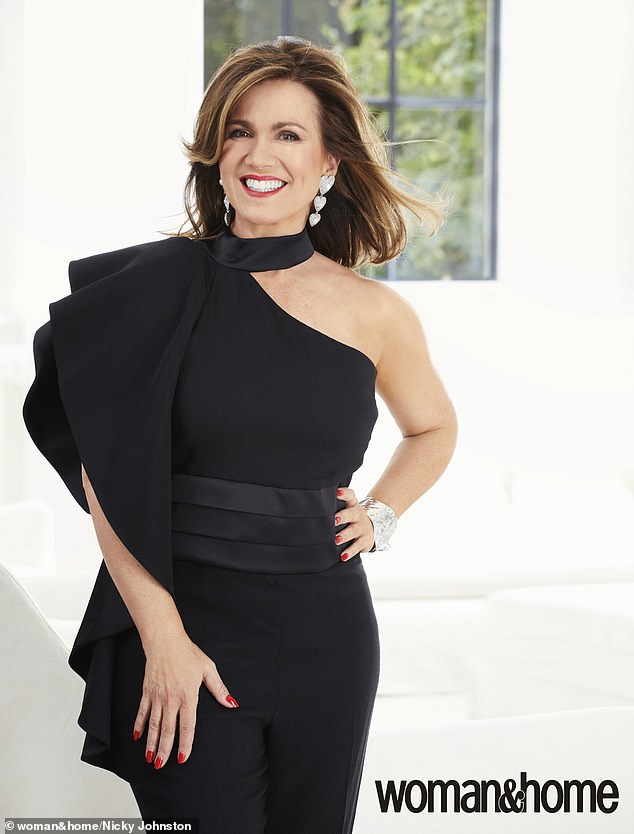 Striking: Susanna Reid showcased her incredible figure as she posed for a glamorous photoshoot with woman&home

Flirtatious Susanna had David giggling like a schoolboy when she interviewed him on Good Morning Britain in 2015.

Yet she insisted things were purely professional between the pair as she named him as her favourite ever interviewee.

The broadcaster used her famed interview style, which has previously been described as ‘less a Paxman-style interrogation and more 50 Shades of flirting’ by a body language expert, leaving the former footballer in fits of giggles on the breakfast show. 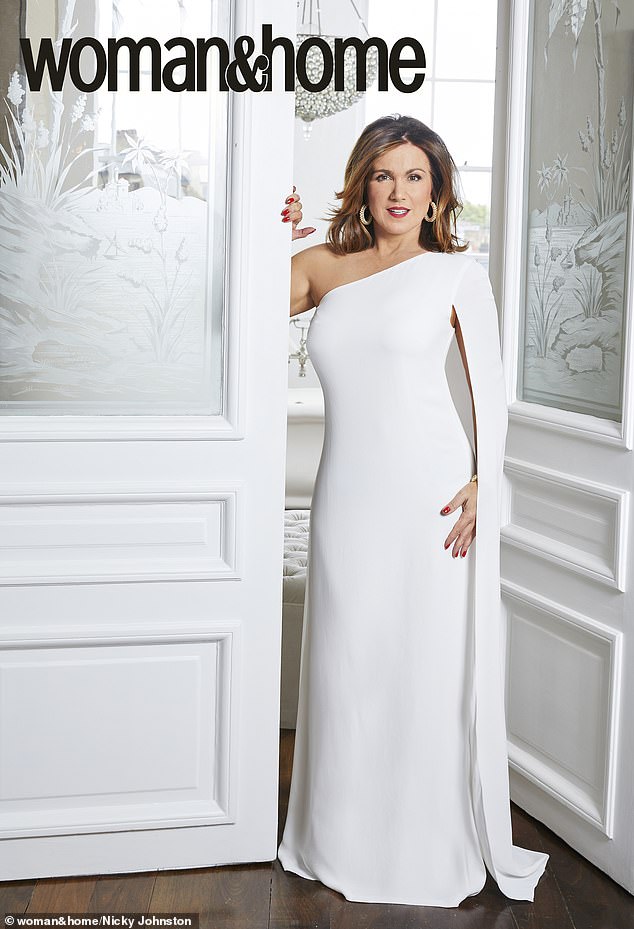 In style: Susanna looked glamorous as she posed for a photoshoot wearing an elegant white floor-length one-shoulder gown in one picture

She told the December issue of the magazine: ‘It’s always lovely to do the big celebrity interviews and one of my favourites was with ex-footballer David Beckham.

‘I spoke with him about his work with UNICEF, retiring from football and Bond rumours, yet I was still teased about flirting with him!’

Wearing a red dress and slick of rouge on her lips, Susanna was seen grinning throughout the interview for GMB as she sat back in her seat and joked that it was ‘hot’ under the lights, prompting sportsman David, 47, to compliment her ‘amazing’ dress. 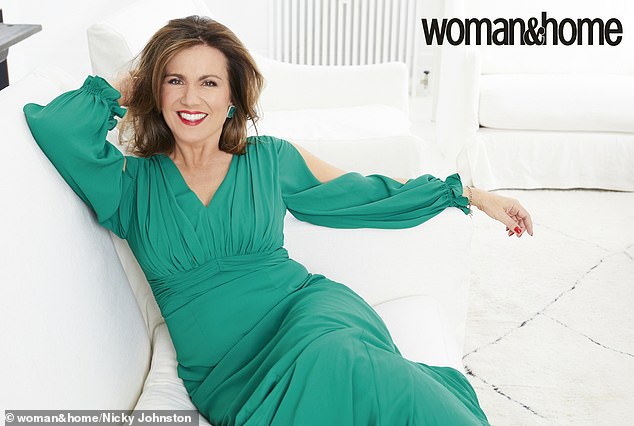 Relaxed: In another, she could be seen smiling as she wore a ruched turquoise dress, with the garment featuring a plunging neckline 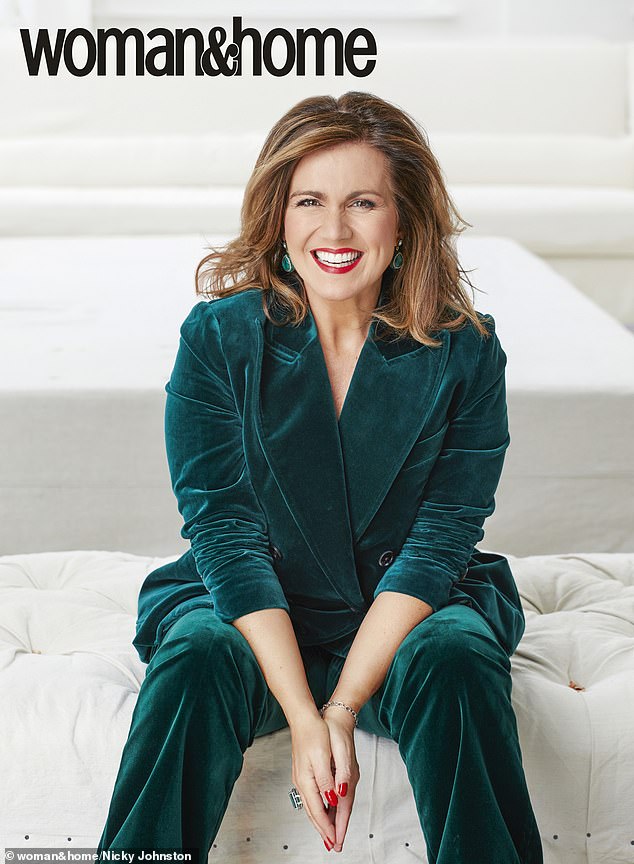 Sensational: She recently lost 1.5 stone after a ‘lockdown slump’ saw her put on a few pounds amid the pandemic

‘It’s blinking hot under these lights, isn’t it?’, said Susanna as she fanned herself.

David replied: ‘It’s very hot. I’m surprised, you’ve got an amazing dress on and I’m in a T-shirt.’

‘I should have worn the T-shirt,’ responded Susanna.

Changes: Susanna admitted to gaining some weight again after suffering with a ‘lockdown slump’ [pictured left in 2018 and right in May 2022]

After the interview aired in 2015, her co-presenter Kate Garraway seemed envious of the exchange. ‘What? The room was hot? You’ve got an amazing dress? Hang on a minute,’ she said.

Giggling after the segment, Susanna told Kate she now considers the father-of-four a ‘friend’.

Kate said: ‘You were nothing but professional but I’m weirdly still bitter.’

Susanna looked stylish as she posed for a glamorous photoshoot for woman&home, wearing a chic halter neck jumpsuit with ruffled detail and a cinched waist in one photo.

In another, she wore an elegant white floor-length one-shoulder gown which featured a length of material down one side which rested gently on the floor beside her as she posed. 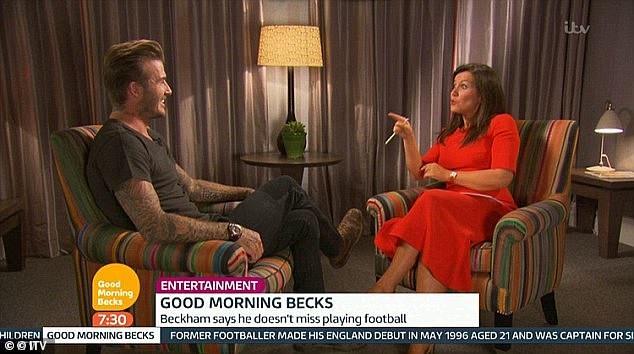 Chatterbox: A flirtatious Susanna had David Beckham giggling like a schoolboy when she interviewed him on Good Morning Britain in 2015

Susanna’s sensational figure was on display in the snaps, which came after she discussed her weight loss journey in a chat with PT Joe Wicks back in June.

She stated: ‘The fact of the matter is that lockdown has had a massive impact on people.’

‘Despite all of that, and the fact that we could get fit online, we do face an increasing obesity crisis.’

‘I found it really hard to shift those pounds. What is the problem when there are so many workout plans, so many nutrition plans?’ 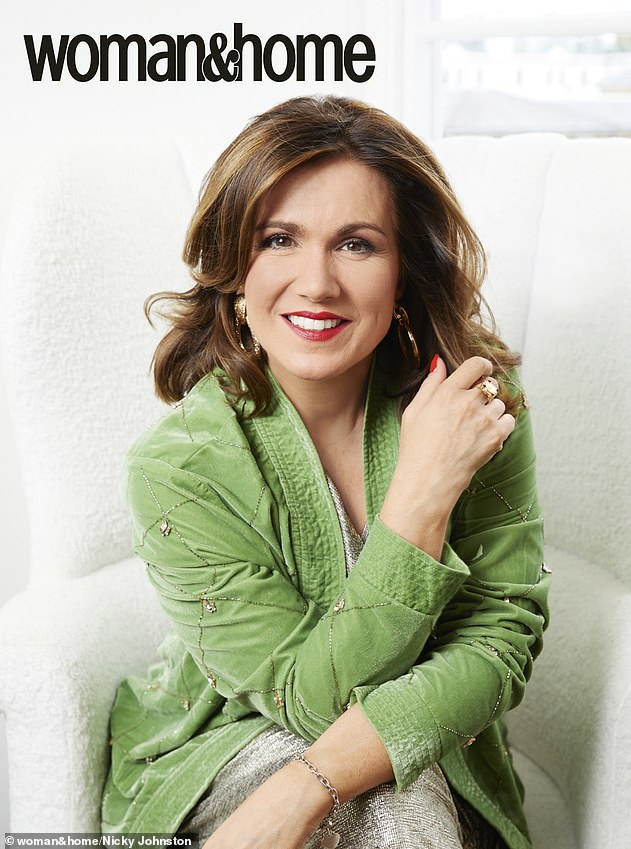 Fashion focus: Susanna wore a green jacket with embroidered detail and a latte-hued dress as she posed for another snap

She previously revealed an ‘excellent’ weight loss tip that was given to her by world heavyweight boxing champion Tyson Fury, who advised she simply stop putting milk in her coffee. 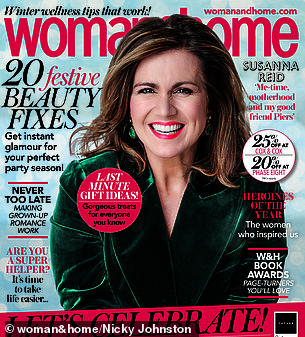 Cover star: The January issue of woman&home is on sale 8 December 2022

Susanna, who is mother to sons Sam, 19, Finn, 18, and 17-year-old Jack with her ex-partner Dominic Cotton, decided last year not to take on any more television jobs so she could be there for her children in their final years of education.

However, she isn’t planning on quitting Good Morning Britain just yes, despite the 3.45am starts.

She said: ‘I love Good Morning Britain so much. Doing what I do is an enormous privilege. It’s a pillar of my life. I wouldn’t want to do anything else!

‘I’ve been doing breakfast TV for as long as I’ve been a mum. That’s two decades of getting up at 3.45am!’

The January issue of woman&home is on sale 8 December 2022.