A student had nowhere to hide when she got her arm stuck in her car steering wheel and had to be freed by firefighters, right outside her halls of residence.

And, if that was not embarrassing enough, her best friend filmed her ordeal and posted it on TikTok.

Solome Asfaw, 19, was left ‘so embarrassed’ when she realised that her arm was trapped in the steering wheel of her VW Polo outside her halls of residence at De Montfort University, Leicester.

The law student had been resting her arm through the steering wheel as she waited for best friend Chelsea Cariazo, 18, when it suddenly became wedged.

Despite her friend’s efforts to free her with hand sanitiser and baby oil, the student, who is originally from Bradford, West Yorkshire, remained stuck for more than an hour before finally enlisting the help of the emergency services.

Ms Asfaw said: ‘I cannot tell you how embarrassing it was. It was such a sticky situation and I started to panic when I realised I was properly trapped in my steering wheel. 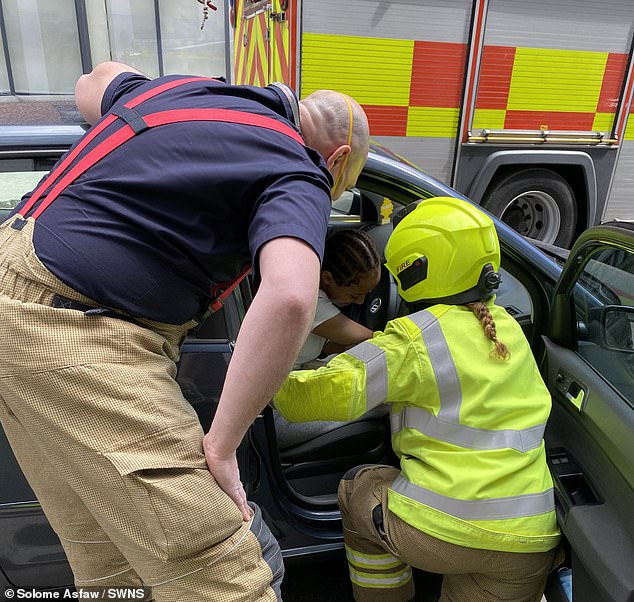 Firefighters rescue Solome Asfaw, 19, after she gets her arm stuck in the steering wheel of her VW Polo in Leicester 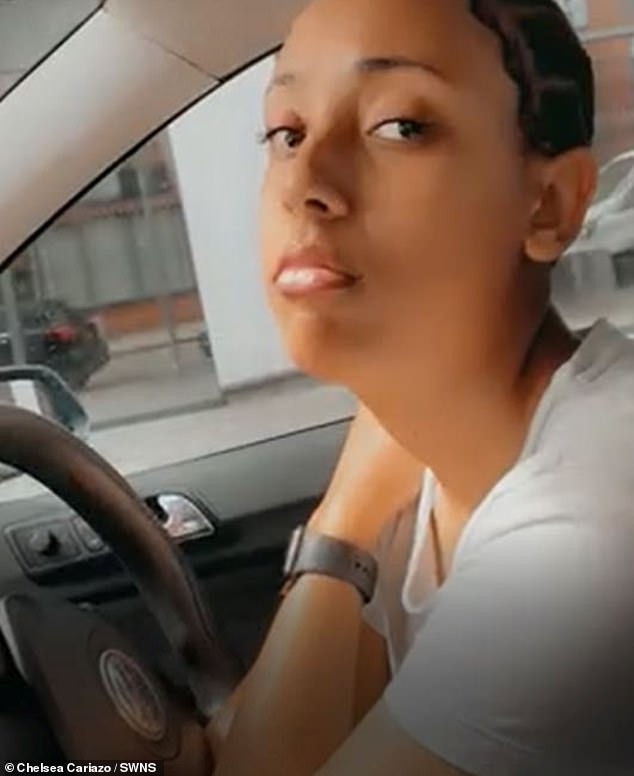 The law student, who had been awaiting outside her halls of residence at De Montfort University, Leicester, looks at her best friend Chelsea Cariazo, 18

‘Everyone came out of halls, there were two building sites nearby and all the builders came to watch, as well as loads of people from the gym next door.

‘I just kept my head down – but people have been messaging me ever since saying they can’t believe it’s me.

‘When I told my mum she laughed and said that whenever me and Chelsea are together nothing goes smoothly. It’s true – there’s never a dull moment.’

The student continued: ‘I told her I had a huge problem, but she didn’t believe me, she just kept laughing.

‘It’s never serious when we’re together, so I couldn’t help but laugh too – I couldn’t believe I’d managed to get myself in that situation.

‘My arm had swollen up and was completely stuck.

‘The only thing I can compare it to is when someone puts a lightbulb in their mouth and then can’t get it out again – I kept picturing that when I was stuck and it just made me laugh even more.’ 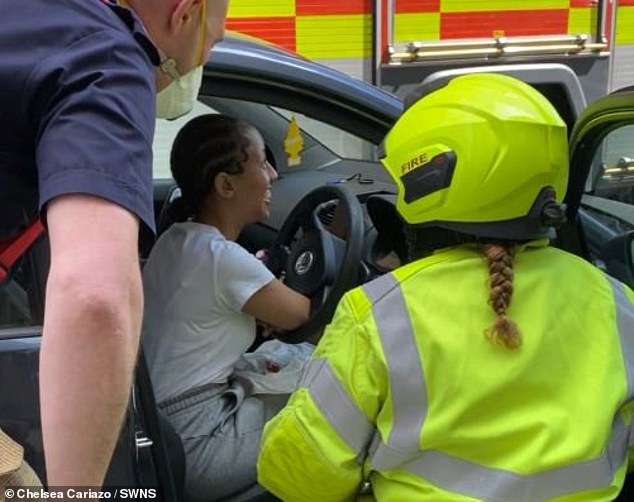 Due to the slanted shape of the steering wheel, Ms Asfaw’s elbow was well and truly wedged, so she asked Chelsea to buy some baby oil from the local shop.

After covering her legs with a plastic bag, Chelsea poured the baby oil over Ms Asfaw’s arm, drenching her legs and the floor of her Polo – but the plan did not help release her from the wheel.

Eventually, after more than an hour, the pair decided they needed to enlist the help of professionals and called 999 before being put through to the fire service.

The call handler sent a fire engine complete with four firefighters to rescue the student  – who they managed to free with some lubricating jelly and a bit of patience.

Ms Asfaw added: ‘The woman laughed at us but said someone was on their way. They arrived in a huge fire truck and the lady put some jelly all down my arm.

‘She tried to pull but it really hurt, so she said I needed to wait until I felt comfortable to pull myself out – and I was finally free.’

Once the fire brigade had left, Ms Salome and her friend, who are currently in their first year of university, returned to their halls of residence to ‘hide’.

‘I was so embarrassed – there were so many people watching,’ the student added.

‘I thought it was over with that day, but Chelsea filmed it and put the video on Tiktok, and it’s gone crazy.

‘I have had so many messages from friends saying they can’t believe it’s me.

‘An old friend who lives in Canada even messaged to say it better not be me!