Joy Cho was shopping with her mother in a Williams Sonoma store when a display of miniature Bundt pans caught her eye. A pastry cook at Gramercy Tavern until the pandemic came, she bought them. This was early January.

The next day, she began composing a sour-cream batter recipe and experimenting with glazes flavored with milk tea, black sesame and other ingredients. By Feb. 1, she was taking orders on her website for boxes of six two-inch Bundts, which could be picked up at her home in Clinton Hill, Brooklyn. An initial batch of what she calls “gem cakes” sold out. So did a second batch.

Ms. Cho’s one-woman cake company, Joy Cho Pastry, is a model of the new businesses founded by New York City bakers and pastry chefs who have been put out of work by the pandemic. Like hers, these seat-of-the-pants operations are nimble, adaptable, highly creative and tiny. 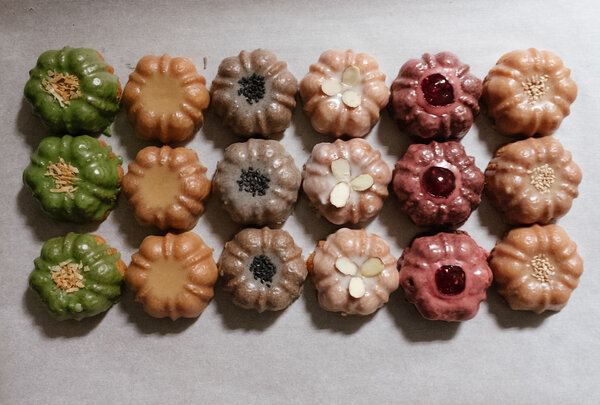 Taking advantage of a state licensing exemption that allows “home processors” to sell baked goods and certain other foods with minimal oversight, most of them use consumer-grade ovens and refrigerators in their apartments, supplemented, perhaps, by a utility shelf or a makeshift work table propped up on sawhorses.

What emerges from these improvised kitchens is a wealth of muffins, scones and shortbreads; brownies with a swirl of tahini and blondies with a bite of candied ginger; classic tarts and tortes; Rice Krispies treats augmented with brown butter or matcha; cupcakes, croissants, rosewater-scented North African-style ghriba cookies, and breads in forms both recognizable and previously unknown.

With the normal barriers to starting a business gone and the usual pressures of the marketplace scrambled, a wonderful, desperate creativity has flourished. It may not last. But for now, these professionals working in amateur kitchens are exploring their medium to see where it can take them.

Almost none of these microbakeries have a retail storefront. Some bakers, like Ms. Cho, hand over bags or boxes to masked customers who ring their apartment bell. Others make socially distanced home deliveries. One way or the other, they get their handiwork into the homes of a populace hungry for the particular pleasures of food whose chief aim is delight.

The past few years in New York City have not been kind to the pastry sciences. Instagram, with its power to anoint a new Cronut at any moment, has bewitched talented people into devoting their careers to the pursuit of edible memes. In restaurants, desserts that make expressive, creative use of the medium are becoming rare, replaced by ones that are easily made and assembled and don’t alienate anybody — sundaes with crunchy bits, and so on.

Menus have focused on getting diners to order a blitz of small plates at the start of the meal. After such an onslaught, few people have the energy or the room left for anything more than a shared pudding. (“One panna cotta with four spoons, then?”) Many restaurants have decided that a full-time salary isn’t justified by what customers are willing to pay for dessert.

If pastry chefs have learned anything in the pandemic, it’s that a sizable audience is out there, eager to try whatever they dream up next.

“What we’ve seen in the last year is, obviously there’s a demand for dessert,” said Kelly Miao, who has worked in the pastry departments of Bar Boulud and Dominique Ansel Kitchen. “I’m not sure why restaurants don’t highlight it more, because there’s so much to offer. Desserts can be extraordinary, but they don’t give them the chance to shine.”

Ms. Miao, 27, had left restaurants before the pandemic and was working a stall at the Bronx Night Market, trying to get a business called Chi Desserts off the ground. But she never came up with a head-swiveling product that persuaded the crowds to stop, taste and buy.

Once it became clear there would be no night markets this year, she reinvented Chi as Kemi Dessert Bar, fashioning sweets in her apartment in Jamaica, Queens, and making home deliveries. The change has given her imagination room to roam.

“I have more opportunity to let my skills show” than at the night market, she said. Ms. Miao, who is Chinese-American, said working for herself also allowed her to draw on flavors that express her Asian heritage but that would have been out of step at the French or Italian restaurants where she used to work.

She makes stratified verrines in plastic cups, with contrasting layers of tart passion-fruit mousse, calming coconut Chantilly and raspberry gelée over baked meringue. Her Thai-tea custard buns reliably sell out, and demand is mounting for Kemi Cubes, which are moist, glazed cakes about the size of the carved ice cubes that a Japanese cocktail bar would deposit in an old-fashioned. In one iteration, she cloaked marble poundcake cubes in vanilla and chocolate icings borrowed from black-and-white cookies.

“I’ve never been able to be this creative in my life,” she said. “I feel really proud of myself that I’ve stepped out of my comfort zone.”

Some of the chefs say that having their work forcibly extracted from the restaurant context has helped them think more broadly about how people might eat their creations. Ms. Cho, 26, believes that her gem cakes make as much sense as a solitary breakfast as they would on a platter at the end of a dinner party, whenever that seems like a good idea again.

“Dessert doesn’t always have to be plated,” she said.

Her cakes are very moist and extremely tender, with a very distinctive consistency that is owed in part to sour cream and in part to a portion of the same sweet rice flour used in mochi.

Michael Davis, who calls his online business Boy Blue Coffee & Goods Store, said that hand-delivering his baked goods to people who have stayed home for months on end has helped him reorder his priorities after spending his adult life in the kitchens of Bouley and other restaurants.

“It changes what you want to provide people,” he said. “There has to be more sustenance to what you’re doing nowadays.”

Mr. Davis, 47, rents kitchen space in the West Village. One day he was hungry for a Philadelphia-style soft pretzel, so he made a batch; now he sells them in boxes of four that cost $10.

Soft pretzels are one of my favorite midafternoon snacks, but the boiling and salting and baking of them is something I am very happy to leave to a professional. When I want a project, I’ll order Mr. Davis’s sourdough bread kit again. A bag of rye and wheat flours with a small tub of sourdough starter, it is ideal for anyone who, like me, who is curious about the sourdough lifestyle but can’t handle the responsibility of keeping a small, burbling colony of micro-organisms alive.

Mr. Davis is justifiably pleased with a recipe he has developed for a round, olive-oil-scented focaccia dotted with everything-bagel seasonings. What do you do with an everything focaccia? Whatever you want, but if you slice and butter it, you have the frame for a superb cucumber-and-lox sandwich.

After you’ve ordered from a few of these young businesses, you start to understand that the bakers have thought about pandemic living as much as you have.

Seabird Bakery, which Shuna Lydon runs out of her apartment in Flatbush, Brooklyn, sends baked goods to Nassau County and every borough except Staten Island in partnership with Twenty Orders, a hot-meal delivery business run by the chef Alain Joseph. On weekends, you might get French toast cooked by Mr. Joseph alongside Ms. Lydon’s cinnamon rolls or filled doughnuts or salty, tangy sourdough English muffins with fresh fruit preserves.

Delivering by midday means working through the night. Ms. Lydon, who before the pandemic worked at Worthwild, in Chelsea, said she gets about three hours of sleep on brunch days. Mr. Joseph gets none.

“Well, why do we do it?” Ms. Lydon, 52, said. “Because brunch is a thing that is very high up there on people’s list of things they miss the most.”

The two pastry chefs who started Wrightwood & Sawyer, Marissa Sanders and David Yang, sell boxes filled with notably tender and nuanced sweet or savory pastries. They know the boxes might be too much for some customers to eat in one day. So they wrote a page on their website called “pastry care,” with tips on storing and reheating different kinds of baked goods — though in the case of the caramelized onion and Gruyère cookie, the advice is minimal: “You should really eat it today.”

Ms. Sanders, 30, hands out pickup orders from her apartment in Carroll Gardens, Brooklyn. Mr. Yang, 38, makes deliveries in Brooklyn. He said he enjoys meeting their customers, even with masks on.

Other pastry chefs echoed the sentiment, noting that when they worked in restaurants and bakeries they almost never met the customers who enjoyed their desserts.

“The psychological heaviness of what’s going on affects me every day,” Ms. Lydon said. “One of the ways I could help myself to get out of my head when I was doing nothing, going nowhere and seeing nobody was to bake, and make a connection.”

As much as they may enjoy ferrying boxes of baked goods, none of the pastry chefs I spoke with want to keep driving around the city forever.

They say they have no choice now. The commissions charged by third-party delivery apps would ruin them. So far, no competing delivery service has emerged with fees that tiny businesses can afford.

Wrightwood & Sawyer and Joy Cho Pastry plan to set up sit-down pastry shops when the pandemic recedes. Ms. Miao wants to transform Kemi Dessert Bar into a small sweets-focused tasting room. Mr. Davis of Boy Blue and his partner in romance and business, Camila Nevin, 34, still hope to open a small neighborhood restaurant with a bakery and cafe across the street.

Ms. Lydon said she is not optimistic about the hiring prospects for pastry chefs in restaurants as the business recovers, but she hopes to keep Seabird Bakery going in some form.

Marissa Sanders of Wrightwood & Sawyer likes to think that some of the tiny businesses born in the teeth of the pandemic will survive, though.

“It’s really cool and interesting to have a whole class of restaurants, basically, where the barrier to entry is much lower than we’re used to,” she said. “I hope it’s something we can hang on to. There’s a real sense of hustle, which is very encouraging and creative as people flourish in this terrible, uncontrollable situation.”

Where the Baked Goods Are

Highlights on the steady menu of mostly savory baked goods are sourdough pretzels ($10 for four), “everything but the bagel” focaccia ($10 for three) and canelé ($10 for four). Deliveries in Manhattan, Brooklyn and western Queens. boybluecoffee.com

Snack-size poundcakes called “Kemi cubes” ($8 for two) are a mainstay on an evolving roster of sophisticated desserts, many with flavors from Asia. Deliveries in Manhattan, Brooklyn, Queens and Nassau County: kemidessertbar.com

The selection of pastries and desserts changes often, but kits of sourdough English muffins with preserves and salted butter are a constant (four for $15). Deliveries in Manhattan, the Bronx, Queens, Brooklyn and Nassau County, or pickups in Flatbush, Brooklyn: @seabirdbakery on Instagram

Each week, two boxes filled with about half a dozen baked goods are offered; the contents are a surprise, but one box is mostly sweet and the other mostly not ($20 each). Deliveries in Brooklyn or pickups in Carroll Gardens, Brooklyn: wrightwoodandsawyer.com