Middle England is in for a shock: ‘Strivers’ ARE worst hit as wages fail to keep up with taxes and bills, say experts

Middle England is ‘set for a shock’, experts warned yesterday as the full impact of Jeremy Hunt’s Budget became clear.

Leading economists said middle-class workers would bear the brunt as their taxes and mortgages were rising while their wages failed to keep up – unlike the poorest who are protected by rising benefits.

Tory MPs warned it would do nothing to help ‘strivers and risk-takers’ who fuel economic growth.

One think-tank said stealth raids would inflict a permanent 3.7 per cent income hit on the ‘squeezed middle’ – bigger than the impact on the richest.

A typical two-income family would end up paying £3,400 more in tax in five years’ time as a result of thresholds being frozen, it was estimated.

The Chancellor unveiled £25billion of increases that will push the tax burden to its highest level since the Second World War. 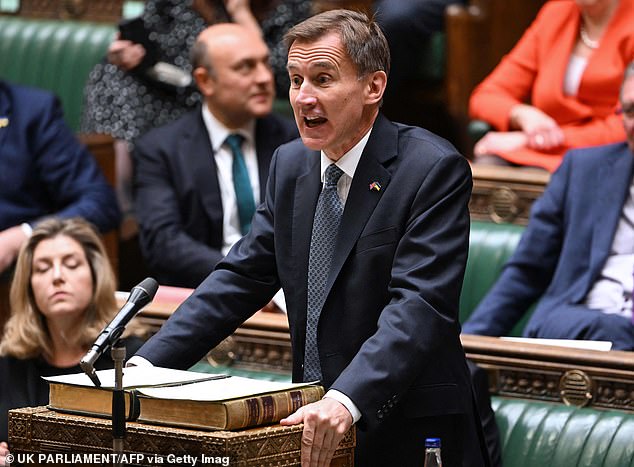 Middle England is ‘set for a shock’, experts warned yesterday as the full impact of Jeremy Hunt’s Budget became clear

In a stark assessment of Thursday’s Autumn Statement, the head of the Institute for Fiscal Studies (IFS), Paul Johnson, said: ‘It’s those on middling sorts of incomes who will feel the biggest hit.

‘They’re not going to benefit from the targeted support to those on means-tested benefits.

Their wages are falling in real terms, their taxes are rising, their housing costs are probably rising.

‘Middle England, I think, is set for quite a shock.’ 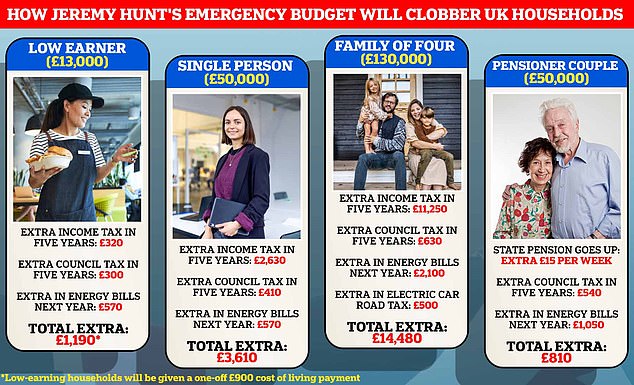 Britain’s middle class will be clobbered hardest by Jeremy Hunt’s emergency Budget, according to an analysis by MailOnline

Income tax will play the biggest role as the Treasury seeks to increase revenue from £825.5billion last year to almost £1.1trillion by 2027/28.

In five years’ time there will be eight million people paying the 40 per cent rate of income tax – up from 1.7million in 1991 – and almost two million paying even higher levels, Mr Johnson predicted.

He said: ‘I would be most surprised if the tax burden gets back down to its long-term pre-Covid average at any time in the coming decades. Higher taxes look to be here to stay.’

He added it was the result of long-term low growth, an ageing population and past borrowing that is leading to massive debt payments as interest rates soar.

‘The truth is we just got a lot poorer. We are in for a long, hard, unpleasant journey – a journey that has been made more arduous than it might have been by a series of economic own goals,’ he said.

The Resolution Foundation think-tank said the freezing of income tax thresholds would result in a 3.7 per cent hit on salaries for typical families – compared with 3 per cent for the highest earners – because it accounts for a larger share of their pay.

It also said pay forecasts now meant real wages would not return to their 2008 level until 2027.

The party’s Treasury spokesman Sarah Olney said: ‘The squeezed middle will continue to work as hard as before, but their efforts will be worth significantly less as disposable income shrinks.’

Money saving expert Martin Lewis warned those on middle incomes would also ‘bear the brunt’ of the cost of living crisis as in future they would not get the £400 energy bill help they are receiving this winter.

‘That is an enormous whack,’ he said. ‘That is why it’s people in the middle who are really going to feel the squeeze.’

Told by the BBC that a ‘vast swathe of middle-income Britain will feel incredibly squeezed now’, the Chancellor admitted: ‘It’s not possible to raise £25billion of taxes just focusing on a very small group of very rich people.

‘What we’re doing with this package is to ask people who have more to contribute more, but also a big package to support people on the lowest incomes.’

He added: ‘The one thing you can’t say if you look at this package as a whole is that I have tried to protect wealthier people. The opposite – I’ve actually asked wealthier people to pay more.

‘As a Conservative, all tax rises are difficult for me because I think we should be moving to a low-tax economy, but I’ve made the choice that in the end, sound money matters more than low taxes.’

But his decisions have sparked a growing rebellion among Conservative backbenchers.

Craig Mackinlay, a member of the public accounts committee, said: ‘High rates of tax on inheritance tax and income tax are being borne by more and more people.

‘That is not a recipe that will help risk-takers, the strivers and the entrepreneurs who will grow the economy. It was very managerial.’

Former work and pensions secretary Esther McVey said: ‘What you don’t need is less of your earnings coming into your pocket.’ 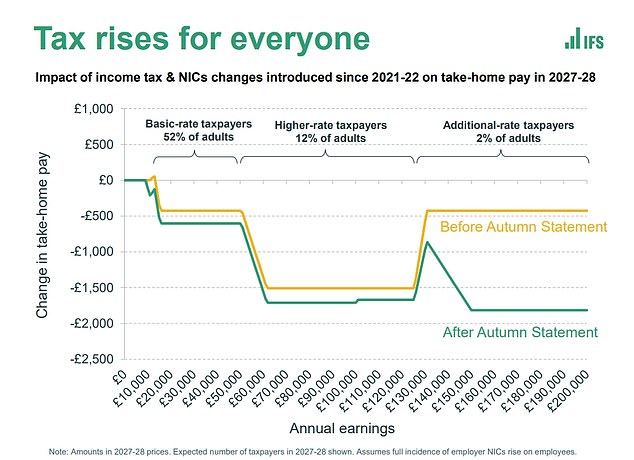 She told GB News: ‘I think – as various people have written – was this the end of the Tory party and is this going to be the nail in the coffin for the next general election?’

Fellow Tory MP David Jones said: ‘Sometimes chancellors do recognise they’ve made a mistake and I would very much hope this Chancellor will reassess some of the measures that he announced.’

Tory peer Lord Cruddas, founder and chief executive of City trading firm CMC Markets, said: ‘I cannot see the difference between this Government and the Labour Party. Conservatives should be about driving growth through lower taxes and supporting SMEs [small and medium-sized enterprises].’

After the market turmoil in September following former chancellor Kwasi Kwarteng’s Budget, grumbles from Tory backbenchers are unlikely to translate into a full-frontal rebellion.

Sir Charles Walker, a senior Tory MP, said he did not like the Autumn Statement but believed it was ‘necessary’.

He told Times Radio: ‘Jeremy has had a hugely responsible Budget. I am sure almost all my colleagues, if not all, will support that.’