Britain will be hit by 75mph winds this weekend as Storm Hannah batters parts of the UK and Ireland – clearing up just in time for the London Marathon on Sunday.

Ireland will bear the main brunt of Hannah, the fourth named storm of the year, but south west England and south Wales are also expected to be hit by gale-force winds and heavy rain.

After a scorching Easter Bank Holiday weekend, temperatures this weekend are set to be 53F (12C) lower than the last, with highs of just 55F (13C) in some parts of the country.

The Met Office has issued yellow wind warnings for Devon, Cornwall, Dorset, Somerset, south Wales and southern parts of Hampshire and Sussex, which come into force at 9pm this evening, lasting until 3pm on Saturday.

Officials have warned there could be travel disruption, power cuts and flying debris around coastal areas.

Surfers have been urged not to attempt to ride the terrifying 26ft high wave known as the Cornish Cribbar, due to reappear this weekend, as it could prove fatal in such stormy conditions. 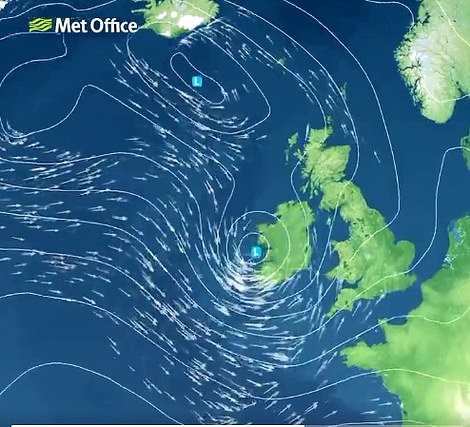 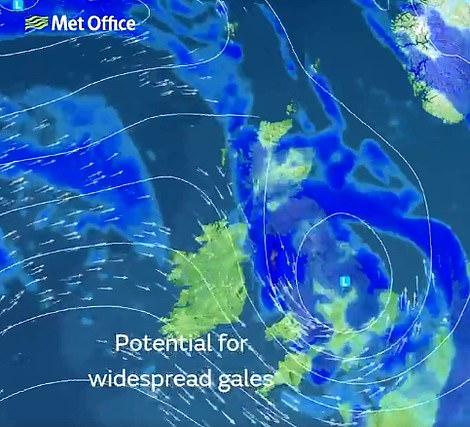 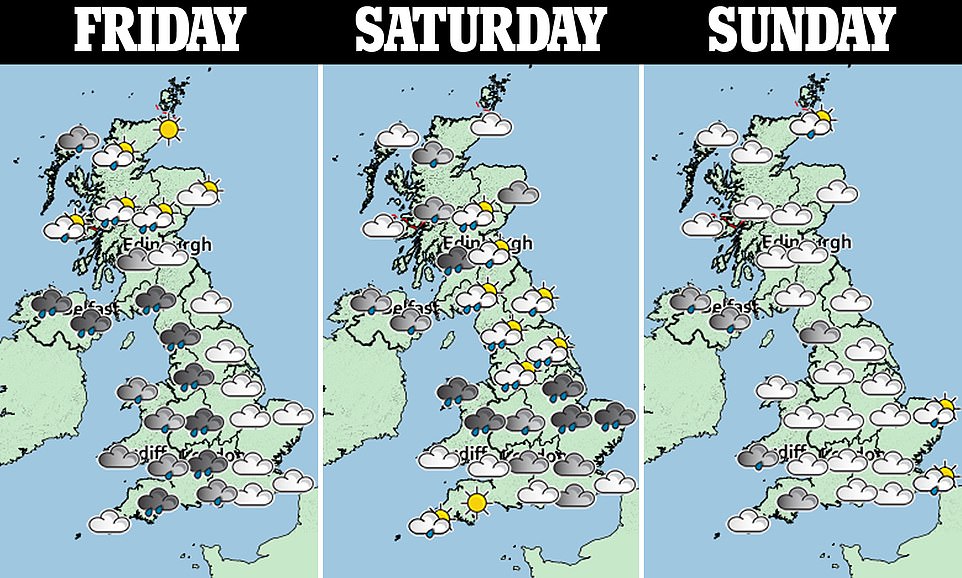 A three-day weather forecast shows rain for most of Britain on Friday and Saturday, before it clears and only clouds remain on Sunday

An RNLI spokesman said: ‘Large breaking waves in excess of three metres along with strong onshore winds will be seen along the coastline with associated increased tidal surges and strong rip currents.

‘It is likely that any lifeguard patrolled beaches will be red flagged. Anglers, coastal walkers and those taking photographs are reminded to keep a safe distance from the water. 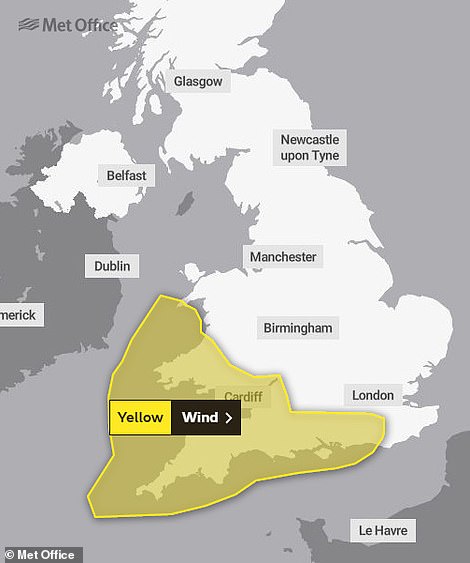 The Met Office has issued yellow wind warnings for Devon, Cornwall, Dorset, Somerset, south Wales and southern parts of Hampshire and Sussex, which come into force at 9pm this evening, lasting until 3pm on Saturday

‘Swimming is not recommended and experienced surfers should avoid exposed beaches and only consider surfing at sheltered spots on the south coast with appropriate supervision.’

London will avoid most of the bad weather, with any rain clearing by Sunday morning when thousands of runners will take to the streets to take part in the marathon. There is just a 10 per cent chance of rain and highs of 57F (14C).

Today will be bright and sunny before things turn wetter this afternoon as rain and thunder starts to come in from the Atlantic Ocean.

Frank Saunders, Chief Forecaster at the Met Office, said: ‘A low-pressure system will sweep in from the west during Friday evening and Saturday bringing strong north-westerly winds to Ireland and then parts of the UK.

‘The strongest and most damaging winds will be felt across Ireland, prompting Met Eireann to name Storm Hannah on Thursday morning.

‘We have issued a yellow wind warning for parts of the UK where we’re likely to see inland gusts of 45-55mph and stronger gusts of around 65-75mph in exposed coastal locations.

‘Trees are coming into full leaf and many people will be on holiday, so the impacts of a late-April storm may differ subtly from one in mid-winter.’

Mr Saunders added that the country will see ‘an unsettled period over the next few days’, with high pressure forecast to return later next week, bringing more settled conditions.

‘Storm Hannah will move away from the UK during Saturday followed by a transient ridge of high pressure bringing more settled weather to the UK for Sunday, good news for London Marathon runners,’ he said.

Rivalling anything on on the planet, the Cornish Cribbar, arrives once every 18 months and draws surfers to Newquay, Cornwall from across the globe, keen to pit their bravery and skill against its towering force.

The wave is due to coincide with the arrival of Storm Hannah with officials desperate for people to avoid trying to ‘ride it’ for fear it might have fatal consequences.

But some surfers see it as the ultimate challenge, with  Dom Moore, who runs the Surf Sanctuary surf school at the Headland Hotel in Newquay explaining: ‘It is the most exciting big wave to surf in Cornwall. It’s the closest you’ll get to a big wave here.

‘The Cribbar is the reef that runs under the water from the Towan headland. It is shallower than the surrounding sea and when the right swell comes in it breaks over the reef.

‘Because you have got a relatively shallow reef surrounded by sand, there is a gradient underwater and it’s not uniform like the beach, so the waves peel off it, rather than closing out.’ 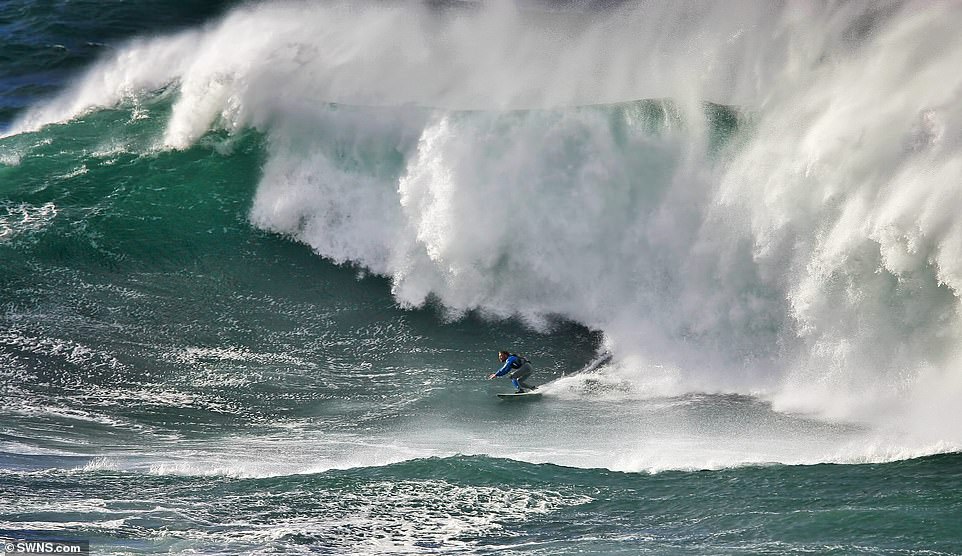