Richmond, Virginia: Virginia's embattled Democratic governor, Ralph Northam, vowed in an interview on Monday not to resign over revelations that he wore blackface at a 1980s party, as a web of scandals enveloped three top state Democratic officials.

A Democratic state politician, meanwhile, said on Twitter that he would not move immediately on his call over the weekend for impeachment proceedings against Virginia's lieutenant governor, Justin Fairfax, who has been accused of sexually assaulting two women, charges he has denied. 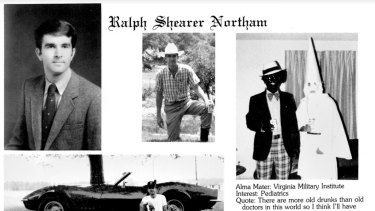 They have been more forgiving of Attorney-General Mark Herring, largely because he came forward on his own to admit having performed in blackface at a 1980 college party, rather than waiting for someone else to accuse him.

Northam and Herring are white; Fairfax is black.

The Democratic state politican, Patrick Hope, who said he might ask the state house to begin discussing impeaching Fairfax if he did not resign signalled on Monday that he was in no rush to act.

"Yesterday I sent draft language to my colleagues on the first step of an impeachment action regarding the Lt. Governor," he said on Twitter. "There has been an enormous amount of sincere and thoughtful feedback which has led to additional conversations that need to take place before anything is filed."

In a series of tweets he said that he believed Fairfax's two accusers but wanted legislators to "build more consensus on a path forward".

Northam, meanwhile, insisted in an interview on CBS on Monday, that he would not resign over the 1984 yearbook picture, which showed a person in blackface next to another wearing the robes and hood of the white supremacist Ku Klux Klan.

Northam initially apologised for being in the photo then, the following day, staged a bizarre press conference where he denied being in that picture but admitted to dressing in blackface for a social event that same year. 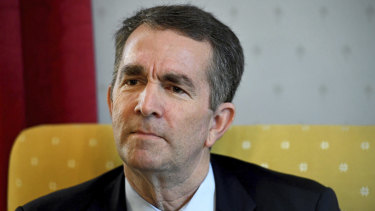 Northam said the photo wasn’t of him but it had been a “learning experience” for him.Credit:AP

On Monday, he said he was "in a state of shock" and mistakenly took responsibility for the image because he had never seen it before, even though it was on his yearbook page.

But then he said he took another look at the picture and realised that neither man in the picture was him.

He said he's learned that he needs to better understand what it means to be "born in white privilege".

He said everything happens for a reason, which is why he plans to dedicate the rest of his tenure as governor to policies aimed at helping his black constituents. 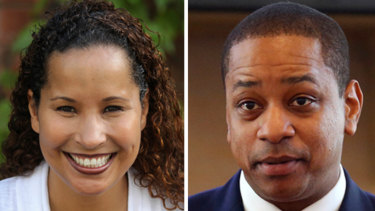 He said he would "focus on race and equity" as his "commitment to Virginia" for the next three years.

Blackface traces its history to 19th-century "minstrel" shows that mocked African-Americans and is seen as offensive by many Americans.

Northam said that Fairfax would have to step aside if sexual assault allegations against him were found to be true.

"And if these accusations are determined to be true, I don't think he's going to have any other option but to resign," Northam said.

Fairfax has said that encounters with both women were consensual. On Sunday, a spokeswoman for the Fairfax said he was "aggressively exploring options for a thorough, independent, and impartial investigation" of the allegations.