Victoria's state of disaster has been extended for 11 days as the Chief Health Officer says COVID-19 transmission is still highest in aged care homes and workplaces, with outbreaks emerging in Melbourne's south-east.

Victoria recorded 90 new cases on Wednesday and six more deaths, including five men in their 80s and one man in his 90s.

The latest deaths were all connected to aged care outbreaks. Three of the deaths occurred in nursing homes prior to Tuesday, but were not immediately reported to the Health Department. 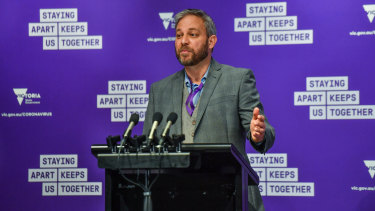 Professor Sutton revealed that a survey had found fewer than 50 per cent of Victorians with mild symptoms, like a scratchy throat or mild cough, were being tested.

More than 50 per cent of people with more severe symptoms, like a fever, were being tested.

"We want 100 per cent of people with compatible symptoms getting tested," Professor Sutton said.

Suburbs in Melbourne's west, north and outer south-east continue to be hotspots for COVID-19 and transmission is mainly occurring in aged care homes, healthcare settings and workplaces, Professor Sutton said.

He said most cases were being detected in the council areas of Brimbank and Wyndham in the west, as well as Casey and Greater Dandenong in the east.

But about 15 per cent of all cases are "mystery" cases where the source of infection is not known.

Professor Sutton said it would be desirable to reach 30 new cases per day, meaning the number of mystery cases would fall to single digits.

"If we can get cases below 30 and the proportion of mystery cases continues to be driven down, then we will absolutely be in very low single figures and we will do that more detailed upstream investigation," he said.

"[The investigation] where you're actually looking at everyone they've been in contact with not just when they're infectious, but in the 14 days before they became symptomatic."

The most important news, analysis and insights delivered to your inbox at the start and end of each day. Sign up to The Sydney Morning Herald’s newsletter here and The Age’s newsletter here.