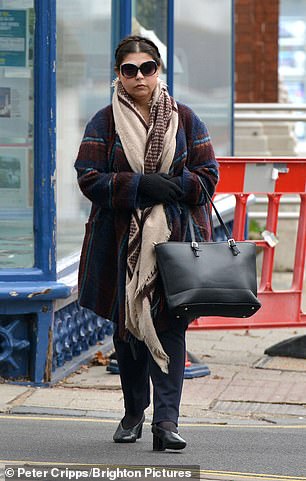 A stalker who accused a college tutor of breaking a 21-clause ‘love contract’ and left him on the brink of suicide was today jailed for four years.

Lina Tantash, 43, embarked on a ‘sinister and sustained’ campaign against Jarlath Rice, 50, bombarding him with messages and demanding that he see her after she claimed to have lent him up to £50,000.

She even hired a private detective to track him down and contacted his friends, family and work colleagues.

Jordanian-born Tantash even ordered hundreds of pounds of takeaway pizza and had it sent to his office during a work event.

She accused Mr Rice of breaching a deal in which she loaned him cash in return for him signing the contract.

Tantash was sentenced to four years in prison after she was convicted of two counts of stalking today.

Her mother broke down in court and begged the judge to show mercy toward her daughter at Lewes Crown Court.

The saga began in 2007 when the ‘highly intelligent’ project manager met Mr Rice, a 50-year-old Irish filmmaker, when they were both working in Dublin in 2007.

They had a brief sexual relationship but Mr Rice ended it after a few weeks when Tantash began to make demands on him. 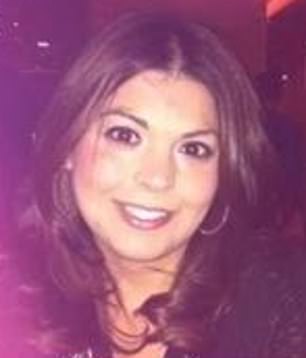 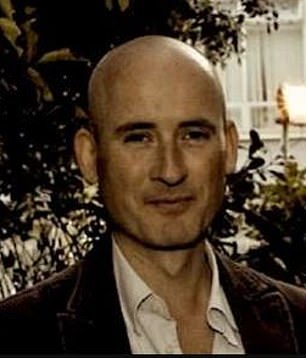 Tantash (pictured, left) claimed that he had lent Mr Rice (right) up to £50,000 in a contract that meant he had to spend time with her in return for the cash

When she continued to contact him he told her he no longer wanted a relationship with her and asked her to leave him alone.

But she refused saying he owned her more than 50,000 euro and even drew up a ‘love contract’ which stipulated he should stop denying they were in a relationship.

It also stated he should live with her three days a week, speak to her on the phone for at least 15 minutes every evening and be nice to her.

Mr Rice desperately fought to escape her attentions and eventually moved from Dublin to Brighton, East Sussex where he started work as a college tutor.

But Tantash, then a ‘highly-respected’project manager at prestigious Trinity College Dublin, followed him from Dublin, taking up a new role in London.

Her campaign of harassment escalated after she suspected Mr Rice, who was working as a tutor at DV8 College in Brighton, had started a relationship with work colleague, Sarah Bolland.

She began bombarding Miss Bolland with abusive phone calls and emails at the college demanding she stop seeing Mr Rice.

Miss Bolland, who was not romantically involved with Mr Rice, was devastated by the abusive calls. 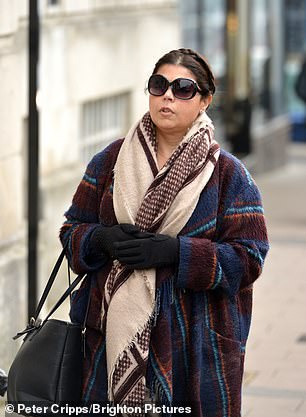 On one occasion Tantash called her and said: ‘Stay away from him, whore! Stay away from Jarlath, bitch. I’m going to f******g kill you.’

On another she said ‘You don’t see him, you don’t date him and don’t f**k him. I’ll kill myself. Would you rather have my blood on your hands?’

And in another Tantash was recorded saying: ‘You look like a horse and you’re an ugly f******g bitch.’

In an email to her she told Miss Bolland she had ‘disgusting frizzy hair, skin like curdled yoghurt and buck teeth’ and that she hoped she had a ‘heartbroken, horrid end’.

She bombarded one colleague with 137 phone calls in one evening asking that he hand over Mr Rice’s mobile phone number and even offered him £1,500 for the information.

On the evening of an open night at DV8 College Tantash ordered around £200 of takeaway pizzas and had them delivered to the college.

In a victim impact statement Mr Rice said the campaign of stalking left him on the brink of suicide and had been in ‘despair’.

He said: ‘For over 10 years I’ve had to live with verbal, mental and physical abuse. The aggressive and abusive dismantling of my life has left me vulnerable, frightened and exhausted.’

He said: He had been ‘pushed deep into depression’ adding: ‘At my worst I have gone through periods of despair with suicide ideation.’

In her defence, Tantash said she came from a stable, upper middle class family but was suffering from a mental condition.

She claimed to have paid Mr Rice’s sizeable debts and supported his career in return for a romantic commitment.

In a victim impact statement Mr Rice said the campaign of stalking left him on the brink of suicide and had been in ‘despair’.

He said: ‘For over 10 years I’ve had to live with verbal, mental and physical abuse. The aggressive and abusive dismantling of my life has left me vulnerable, frightened and exhausted.’

He said he had been ‘pushed deep into depression’ adding: ‘At my worst I have gone through periods of despair with suicide ideation.’

Miss Bolland said: ‘It’s a strange and terrible experience when someone psychologically harasses you like this. It’s an awful feeling. It’s astonishing how much it can impact your life, your mood, your thoughts.’

Teresa Mulrooney, defending, said: ‘Miss Tantash deeply regrets her behaviour and has come to understand the impact it has had.’

Sentencing her, Recorder Stephen Lennard, said: ‘You were never prepared to accept it was over and thereafter carried out a sustained and vicious campaign of stalking and harassment that lasted 10 years.

‘In my opinion you are vicious, devious and manipulative woman. You should be thoroughly ashamed of what you have done to Mr Rice and Miss Bolland.’

He also handed her a restraining order. Felicity Lineham, from the CPS, said: ‘Lisa Tantash carried out an orchestrated campaign of stalking over a prolonged period of time, which had a massive impact on the lives of her victims.

‘As a result of Tantash’s obsessive behaviour, her ex-boyfriend moved country and addresses to escape her and has had to change his contact details numerous times. Tantash was relentless in trying to contact him, even offering money to people he worked with in exchange for his new number.

‘Tantash became obsessed that her former partner had started a new relationship and then persistently targeted the woman in her workplace, making her life a misery.

‘Her behaviour was carefully planned to cause maximum distress but all the time she saw nothing wrong with what she was doing or the impact it was having on her victims. We hope today’s sentencing allows both victims to move on with their lives.’