COLOMBO (Reuters) – Sri Lanka said on Monday it was invoking emergency powers in the aftermath of devastating bomb attacks on hotels and churches, blamed on militants with foreign links, in which 290 people were killed and nearly 500 wounded.

The emergency law, which gives police and the military extensive powers to detain and interrogate suspects without court orders, will go into effect at midnight on Monday, the president’s office said.

Colombo, the seaside capital of the Indian Ocean island, was jittery on Monday. Police said 87 bomb detonators were found at the city’s main bus station, while an explosive went off near a church where scores were killed on Sunday when bomb squad officials were trying to defuse it.

A night curfew will go into effect at 8 p.m., the government announced.

There was no claim of responsibility for the attack but suspicion was focusing on Islamist militants in the Buddhist-majority country.

Investigators said seven suicide bombers took part in the attacks while a government spokesman said an international network was involved.

Police had received a tip-off of a possible attack on churches by a little-known domestic Islamist group some 10 days ago, according to a document seen by Reuters.

The intelligence report, dated April 11 and seen by Reuters, said a foreign intelligence agency had warned authorities of possible attacks on churches by the leader of the group, the National Thawheed Jama’ut. It was not immediately clear what action, if any, was taken on the tip-off.

Police said 24 people had been arrested, all of whom were Sri Lankan, but they gave no more details.

International anti-terrorism experts said even if a local group had carried out the attacks, it was likely that al Qaeda or Islamic State were involved, given the level of sophistication.

Two of the suicide bombers blew themselves up at the luxury Shangri-La Hotel on Colombo’s seafront, said Ariyananda Welianga, a senior official at the government’s forensic division. The others targeted three churches and two other hotels.

A fourth hotel and a house in a suburb of the capital Colombo were also hit, but it was not immediately clear how those attacks were carried out.

“Still the investigations are going on,” Welianga said.

Most of the attacks came during Easter services and when hotel guests were sitting down for breakfast buffets.

“Guests who had come for breakfast were lying on the floor, blood all over,” an employee at Kingsbury Hotel told Reuters.

Cabinet spokesman Rajitha Senaratne said an international network was involved, but did not elaborate.

“We do not believe these attacks were carried out by a group of people who were confined to this country,” Senaratne said. “There was an international network without which these attacks could not have succeeded.”

The president, Maithripala Sirisena, said in a statement the government would seek foreign assistance to track the overseas links.

Sri Lanka was at war for decades with ethnic minority Tamil separatists, most of them Hindu, but violence had largely ended since the government victory in the civil war, 10 years ago.

Most of the dead and wounded were Sri Lankans although government officials said 32 foreigners were killed, including British, U.S., Australian, Turkish, Indian, Chinese, Danish, Dutch and Portuguese nationals. 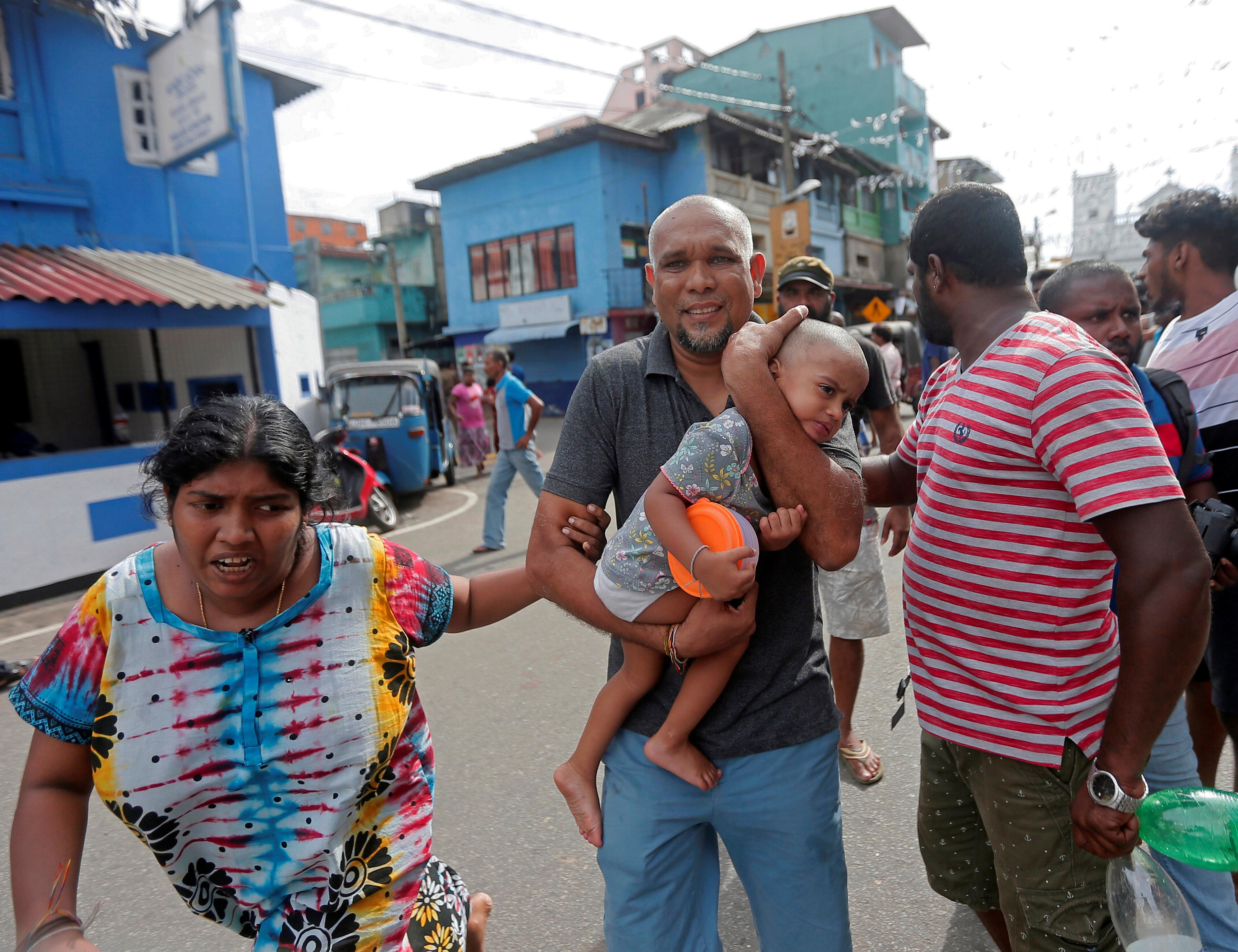 Denmark’s richest man Anders Holch Povlsen and his wife lost three of their four children in the attacks, a spokesman for his fashion firm said.

A British mother and son at breakfast at the Shangri-La, British media reported, while five Indian political workers were killed at the same hotel, relatives told Indian media.

The hotel said several guests and three employees were killed.

There were fears the attacks could spark communal violence, with police reporting late on Sunday there had been a petrol bomb attack on a mosque in the northwest and arson attacks on two shops owned by Muslims in the west.

Traffic was uncharacteristically thin in normally bustling Colombo after an island-wide curfew was lifted earlier Monday.

Soldiers with automatic weapons stood guard outside major hotels and the World Trade Center in the business district, a Reuters witness said.

An Australian survivor, identified only as Sam, told Australia’s 3AW radio the hotel was a scene of “absolute carnage”.

He said he and a travel partner were having breakfast at the Shangri-La when two blasts went off. He said he had seen two men wearing backpacks seconds before the blasts.

“There were people screaming and dead bodies all around,” he said. “Kids crying, kids on the ground, I don’t know if they were dead or not, just crazy.” 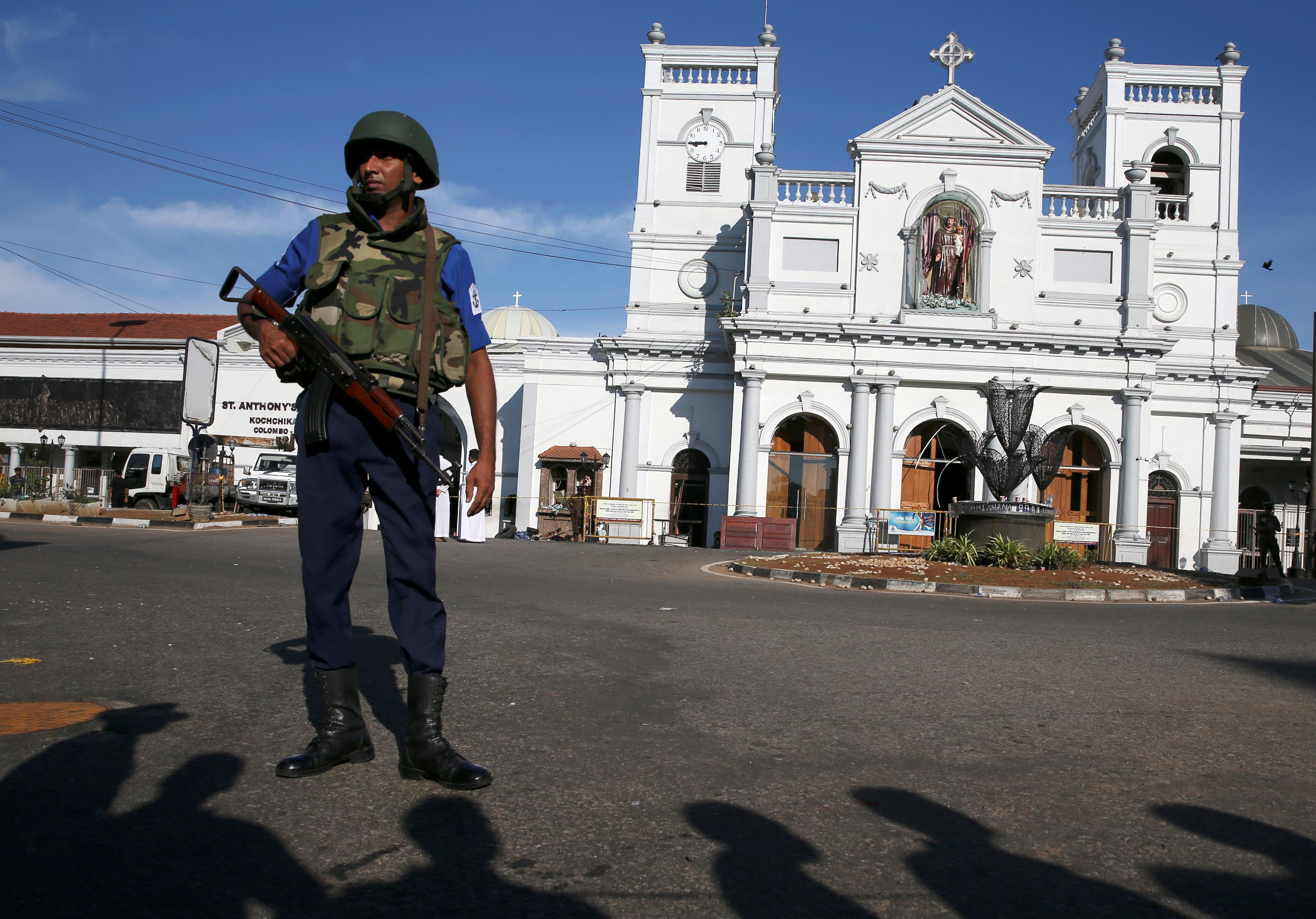 There were similar scenes of carnage at two churches in or near Colombo, and a third church in the northeast town of Batticaloa, where worshippers had gathered. Pictures showed bodies on the ground and blood-spattered pews and statues.

Dozens were killed in a blast at the Gothic-style St Sebastian church in Katuwapitiya, north of Colombo. Police said they suspected it was a suicide attack.

Questions over why the intelligence report warning was not acted upon could feed into a feud between Prime Minister Ranil Wickremesinghe and the president.

Sirisena fired the premier last year and installed opposition strongman Mahinda Rajapaksa in his stead. Weeks later, he was forced to re-instate Wickremesinghe because of pressure from the Supreme Court but their relationship is still fraught as a presidential election nears.