Team will try to explore possibility of a visit by President Moon Jae-in to Pyongyang, after invitation by Kim Jong-un. 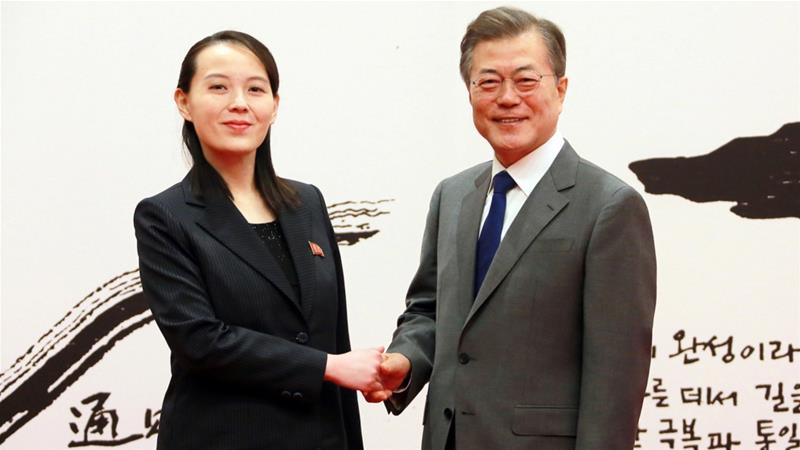 A delegation of South Korean envoys will travel to North Korea to discuss bilateral relations between the two rival neighbours and potential dialogue between Washington and Pyongyang administrations, according to South Korea’s presidency.

Al Jazeera’s Rob Mc Bride, reporting from the capital, Seoul, said on Sunday that the delegation will be made up of 10 members, led by National Intelligence Service (NIS) chief Suh Hoon and National Security Office (NSO) head Chung Eui-yong.

“One of those officials, Suh Hoon, was involved in two previous inter-Korean summits in the past in 2000 and 2007,” he said.

“It seems that the delegation’s mission will be two-fold. One will be to explore the kind of situation you need before you can have dialogue between Pyongyang and Washington.

“Second and more immediate one will be to discover the possibility of a visit by Moon Jae-in to North Korea, after the invitation was passed on him during the Olympics by Kim Jong-un’s sister.”

After the two-day visit to North Korea starting on Monday, the delegation will travel to the US to brief officials there on their discussions in Pyongyang.

The delegation’s visit, announced by the South Korean President’s office on Sunday, is the latest chapter in a remarkable detente achieved through the recently concluded Winter Olympics where North Korean athletes were accorded warm welcome.

The trip is in response to an invitation offered by North Korean leader Kim Jong-un’s sister for South Korean President Moon Jae-in to visit Pyongyang.

The isolated, impoverished North staged its most powerful nuclear test and test-fired multiple missiles last year, including some capable of hitting the US mainland, in defiance of UN sanctions.

The North’s leader Kim and US President Donald Trump have traded threats of war and personal insults, sending tensions soaring.

Moon, who advocates dialogue with the nuclear-armed regime, said last week that Washington needs to “lower the threshold for talks” with Pyongyang.

However, the US has ruled out any possibility of talks before the North takes steps towards denuclearisation, and imposed what Trump hailed as the “toughest ever” sanctions on Kim’s regime late last month.

On Saturday, a foreign ministry spokesman in Pyongyang called on the US drop any preconditions for talks.