From a German soldier’s harrowing return home after WWII… to Sophia Loren stripping off: US photographer’s glittering career is showcased in new London exhibition

Legendary screen siren Sophia Loren plays with her hair in New York, 1959, after stripping off to her underwear and covering herself with a fur stole.

Elsewhere singer Eartha Kitt raises her eyebrows as she has her dress adjusted  by designer Hubert de Givenchy in Paris in 1961.

In stark contrast to this world of glamour, a German soldier who was held prisoner by the US looks forlorn after returning to his Frankfurt home in 1947 – only to find it reduced to rubble.

These fascinating pictures were taken by celebrated photographer Tony Vaccaro, and form part of a new exhibition; his first one in the UK in more than 50 years.

Now aged 95, the American snapper is well known for his photos taken in Europe during the Second World War, and its aftermath in Germany.

He subsequently became an in-demand fashion and lifestyle photographer, contributing to such magazines as Life, Harper’s Bazaar and Newsweek.

Tony Vaccaro: From Shadow to Light is on at Getty Images Gallery, London W1W 8DX, from Aug 6 to Oct 27 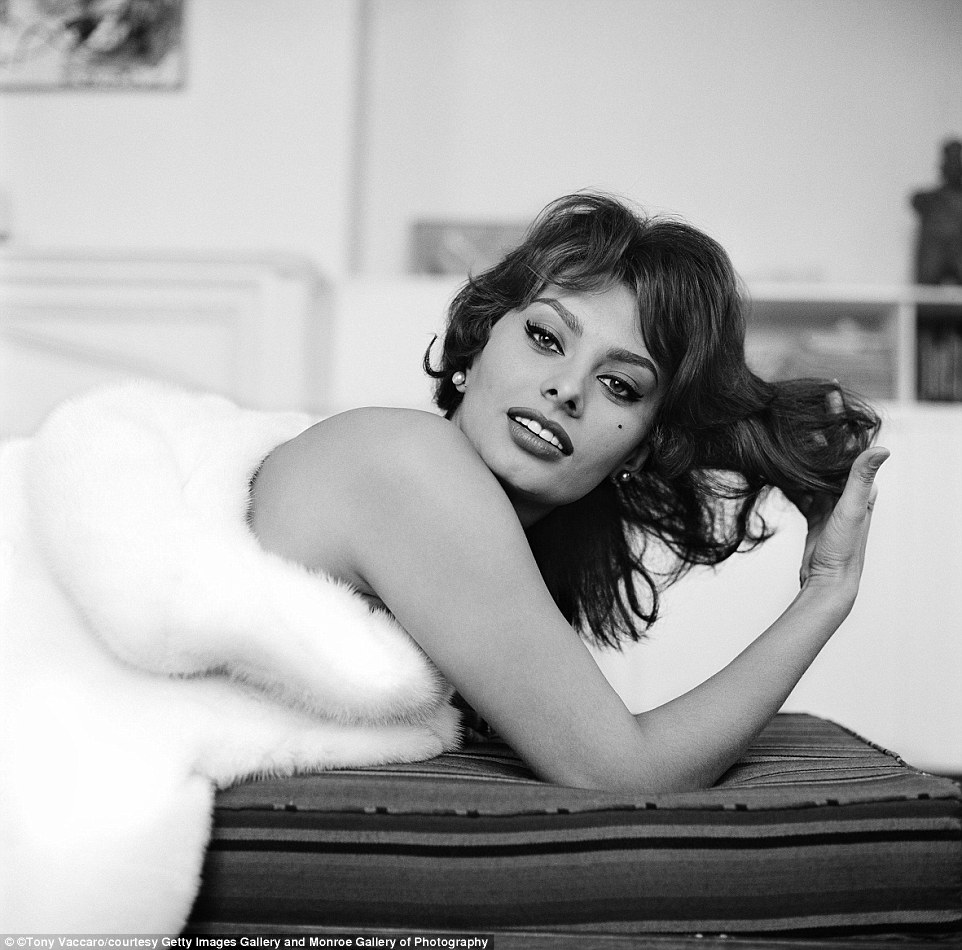 Actress Sophia Loren in New York, 1959: This image forms part of an exhibition in London focusing on the work of 95-year-old American snapper Michael ‘Tony’ Vaccaro. His career spans nearly eight decades – from documenting D-Day to fashion photography, where he has captured some of the most famous and influential people of the 20th century. This shot of Loren in a fur stole, and her underwear, was taken at Vaccaro’s 77th street penthouse. Loren had turned up at his apartment while he was taking a shower – whereupon she was urged to take some of her clothes off 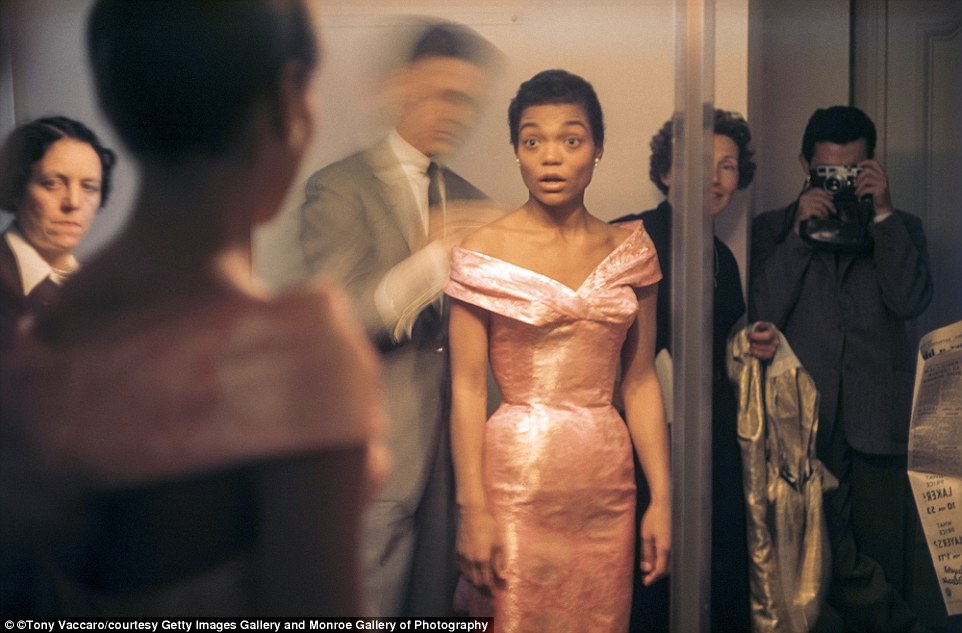 French fashion designer Hubert de Givenchy adjusts singer Eartha Kitt’s dress during a fitting in Paris in 1961.  Vaccaro is best known for his photos taken during World War II and post-war Europe which then led to a life’s work in fashion, travel, and celebrity portraits as a photographer for US magazines 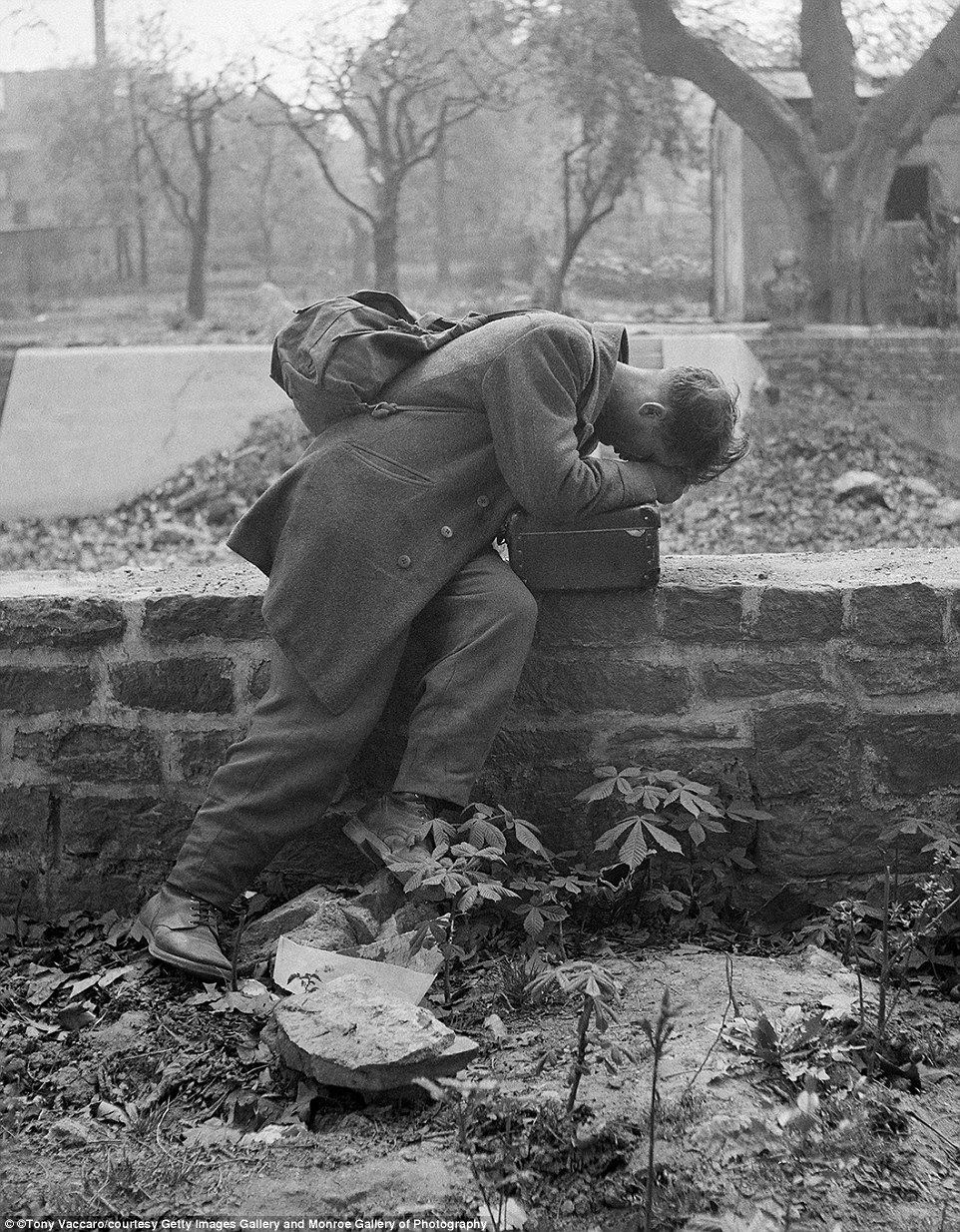 A German soldier, held prisoner in the United States of America, returns to his Frankfurt home on March 4, 1947 – only to find rubble, across the street from the American consulate. Born in Greensburg, Pennsylvania in 1922, Vaccaro was sent to England in 1944 with the 83rd Infantry Division and documented his experience on the front line of World War II. After the war, Vaccaro spent five years documenting the rebirth of post-war Europe on shooting assignments for the War Department and the US Army newspaper, Stars and Stripes 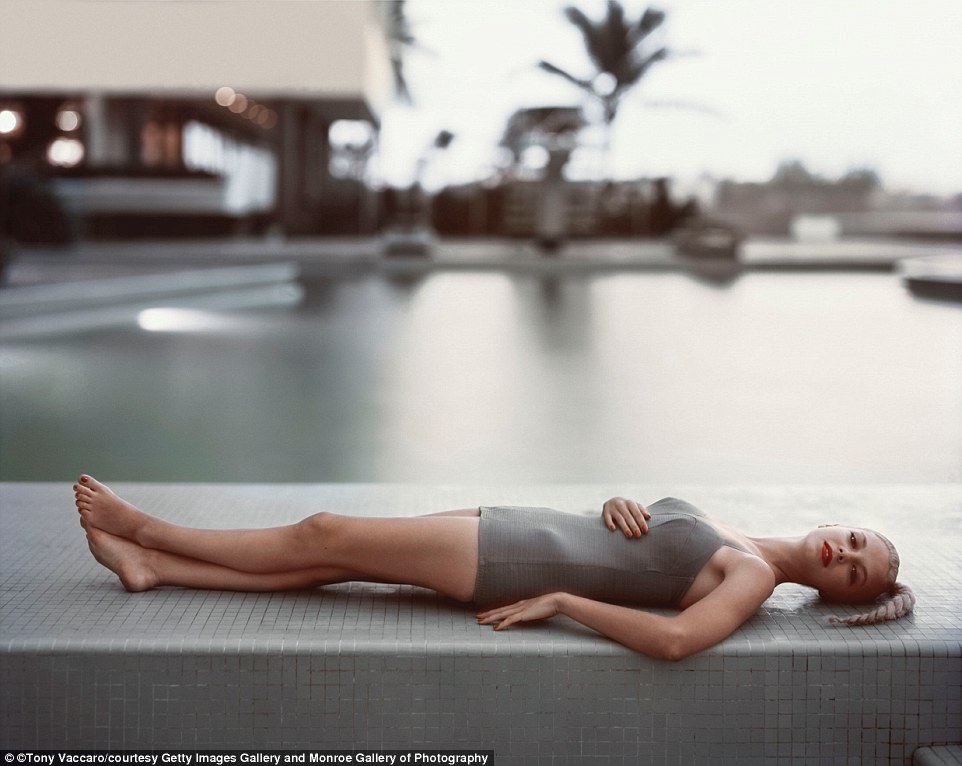 Hotel Caribe Hilton, rooftop pool, Puerto Rico, 1951. The new exhibition, Tony Vaccaro: From Shadow to Light is on at Getty Images Gallery from Aug 6 to Oct 27. Vaccaro said: ‘After all these years I will be back in London. I had been photographing the Queen last time I was in London in 1971 and Shirley MacLaine on an assignment for Look Magazine. I was working non-stop, so now after 47 years I am back and I would have never thought of having an exhibition in London at 95 years of age’ 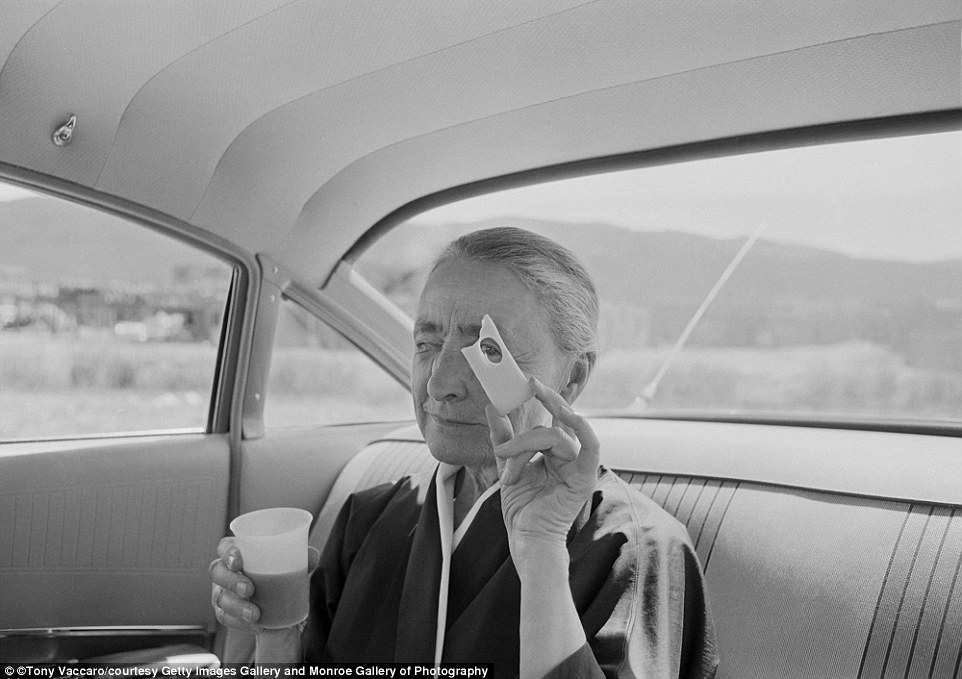 American artist Georgia O’Keeffe and Cheese, New Mexico, 1960. After the war, Vaccaro eventually returned to New York and started a 28-year career freelancing for major fashion and lifestyle publications including LIFE, Newsweek, Flair, Harper’s Bazaar and Town and Country, for whom he shot the most famous personalities of the day 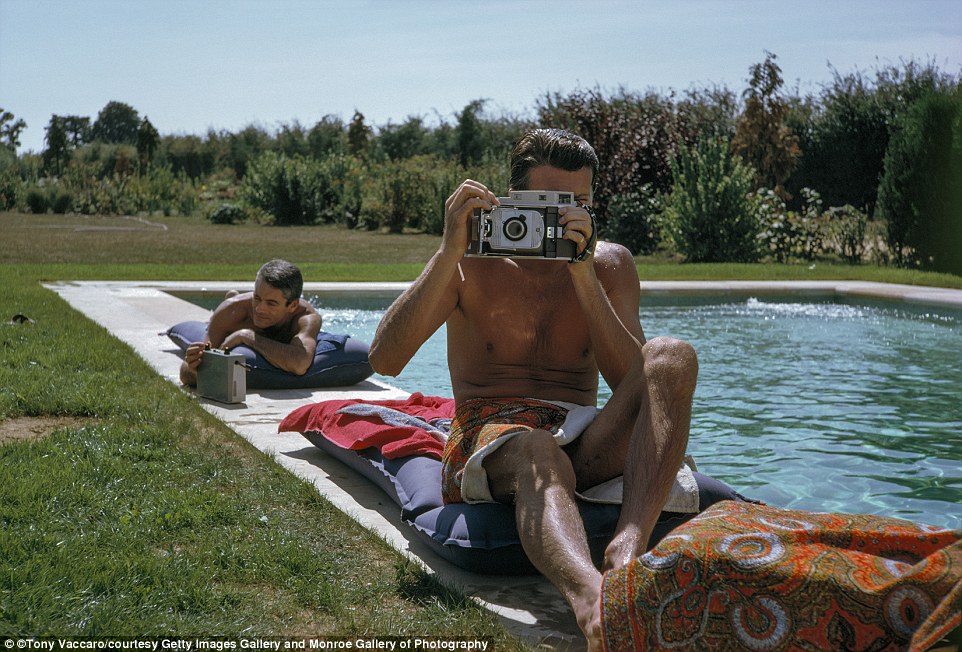 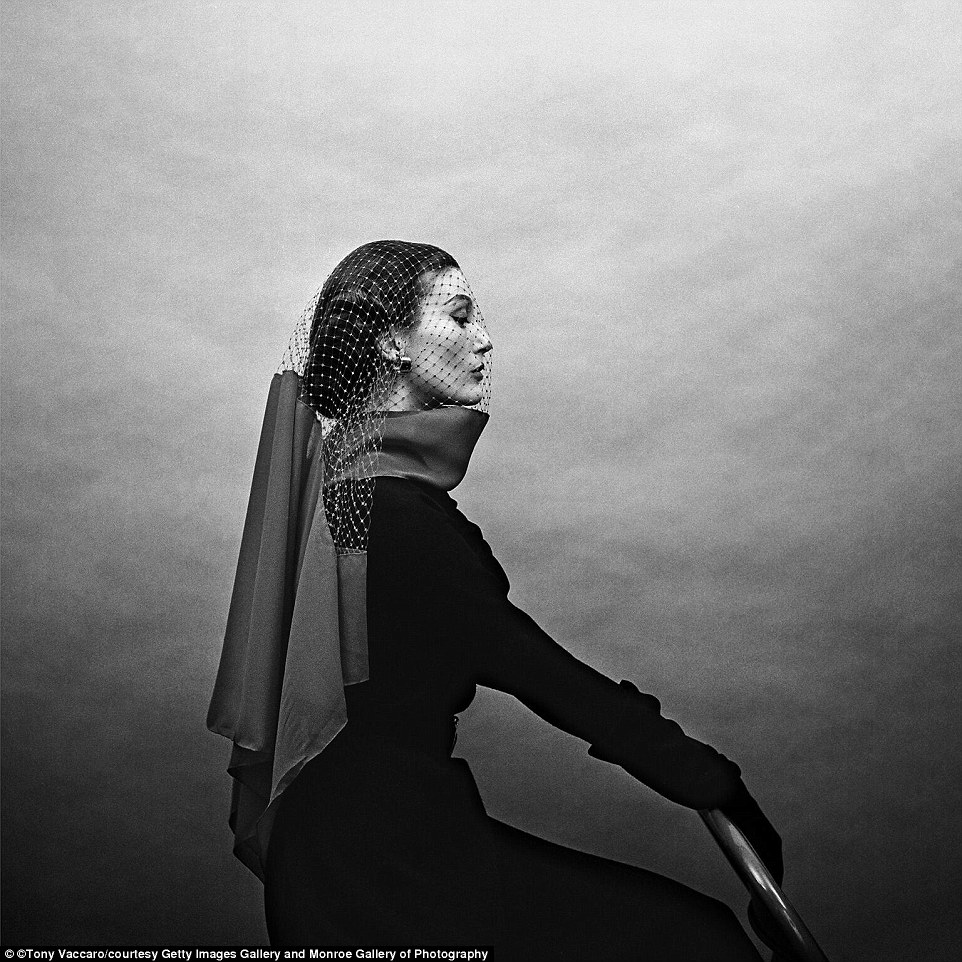 Mary Jane Russell shows off a veil for Flair magazine, New York 1951. Mary Jane was a leading fashion model in the 1940s and 50s. Despite being just 5ft 6in, she had classic model features – and no shortage of work. She died in 2003 at the age of 77. Shawn Waldron said of Vaccaro: ‘The incredible thing about Tony is that only now, at 95 years old, we are beginning to fully appreciate, and mine the depths, of his life’s work. For a curator, and collectors alike, it is very exciting’ 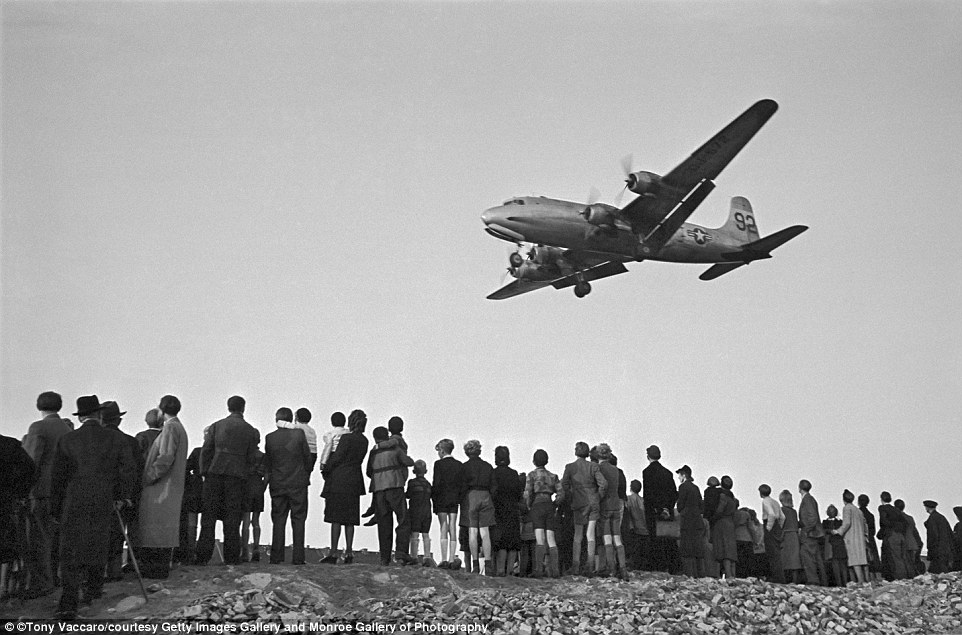 C-54 landing in Berlin: Vaccaro’s pictures capture a rare view of the war as seen through the eyes of someone who fought in combat from the beaches of Normandy to Berlin. His iconic representations of the war led the BBC to describe him as the ‘greatest combat photographer of WWII’ and the Italian press dubbed him ‘Il Maestro’ 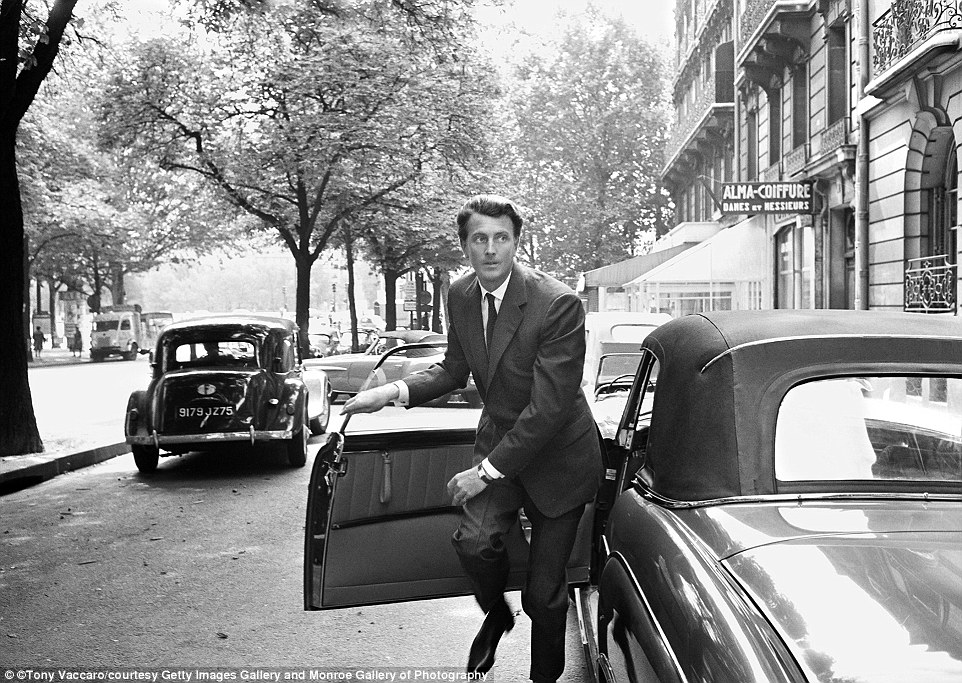 Hubert de Givenchy departs from a photo shoot in his Mercedes, Avenue Montaigne, Paris in June 1960. Fast forward nearly 60 years, and Vaccaro today lives and works in Long Island City and spends his days organising his pictures in the Tony Vaccaro Studio 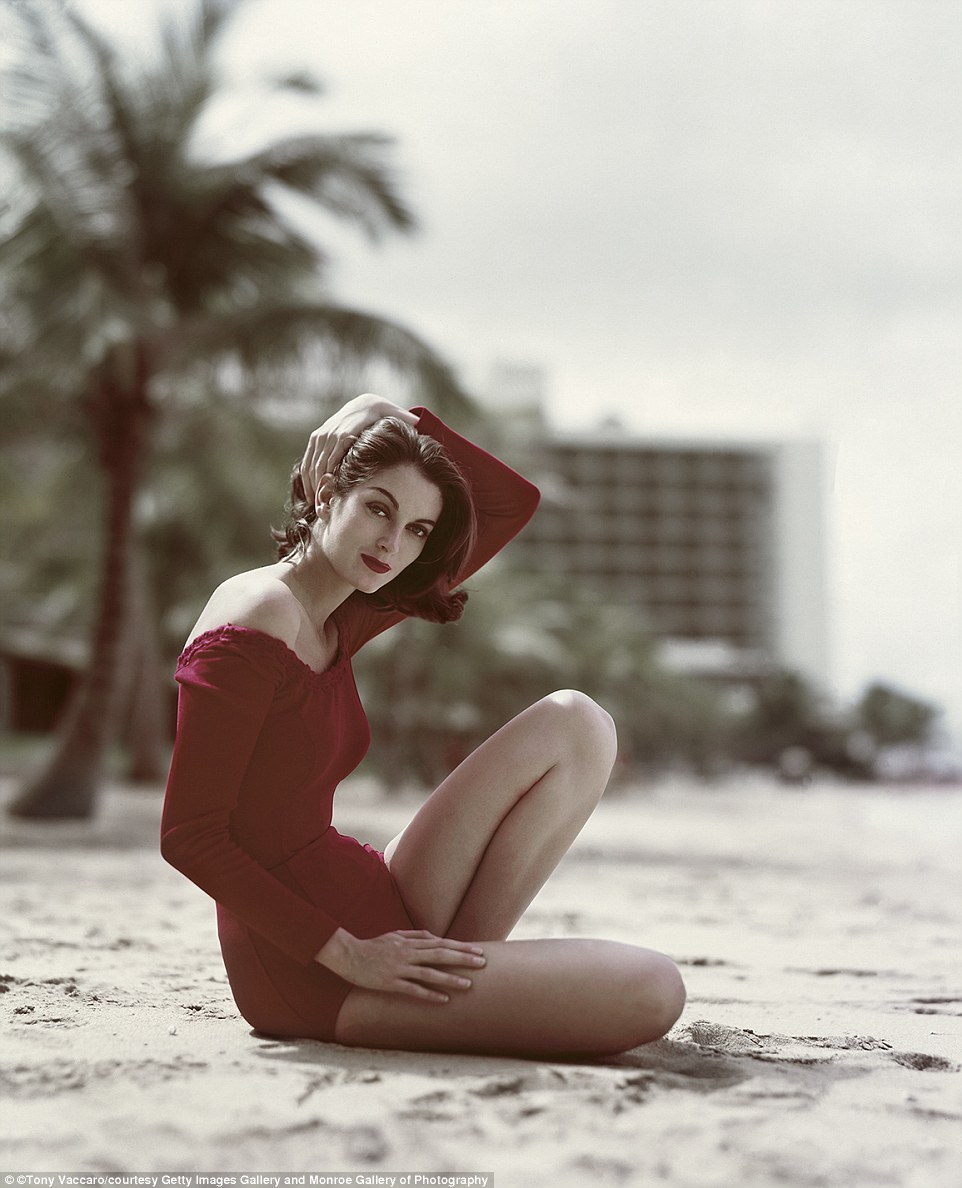 Many of these images have never been seen before, and are only now being discovered, shown and sold as part of the London exhibition – the first UK selling exhibition devoted to Vaccaro’s work 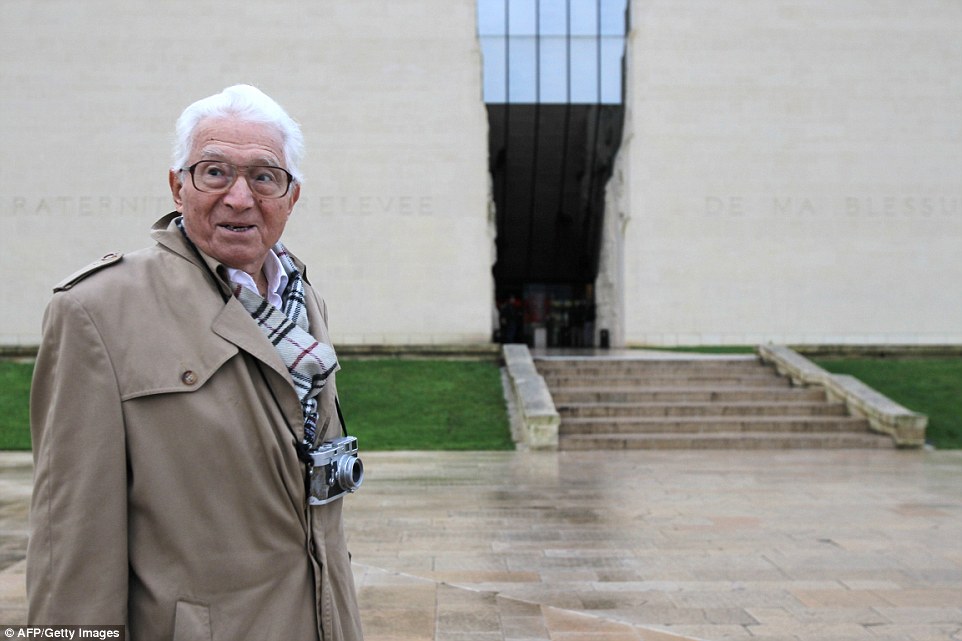