A GROUP of villagers were left horrified after a six-foot-long snake was spotted crawling down a country lane and coughing up blood.

The huge beast, later identified as a boa constrictor, was discovered opposite a layby near Roden, Shropshire on Friday. 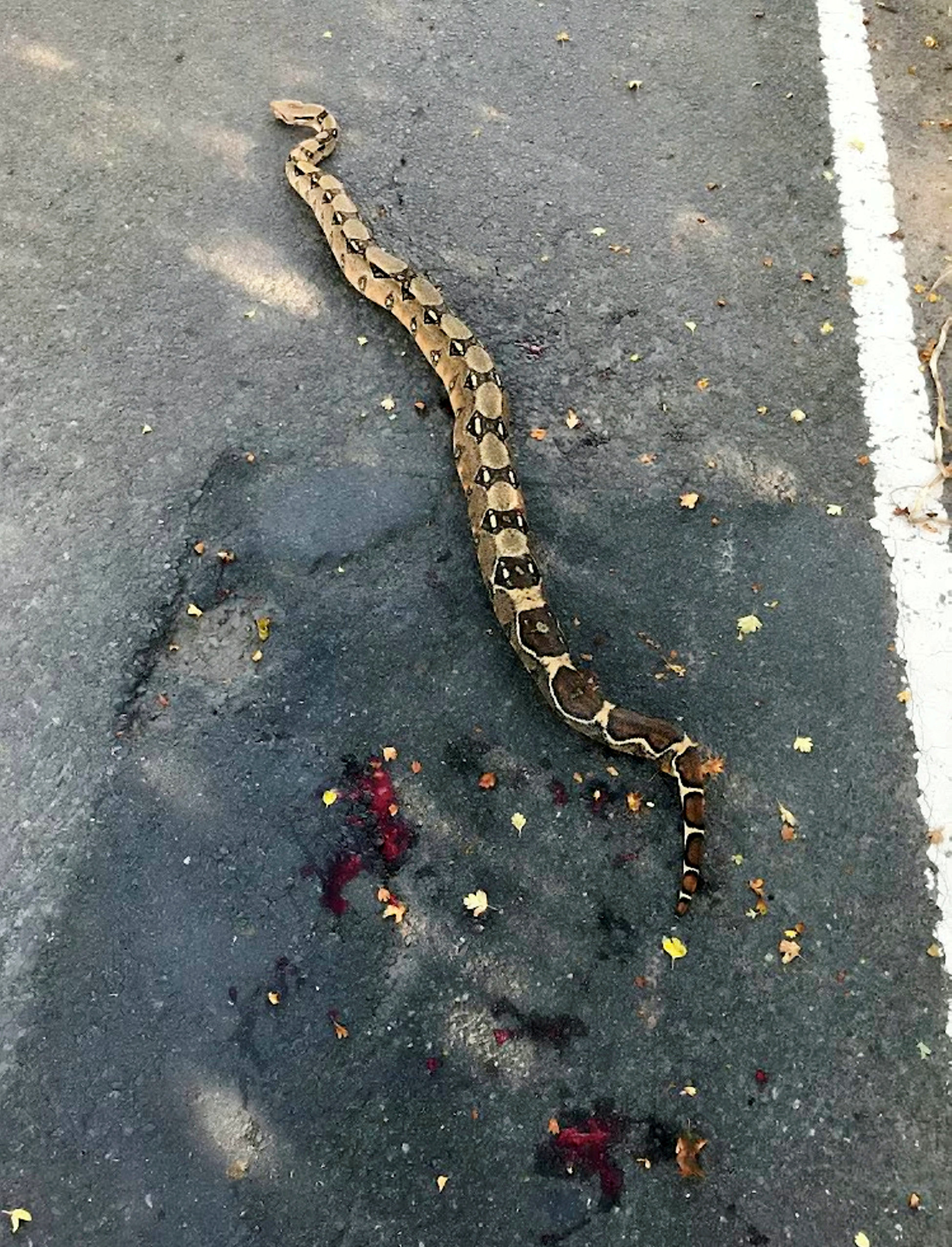 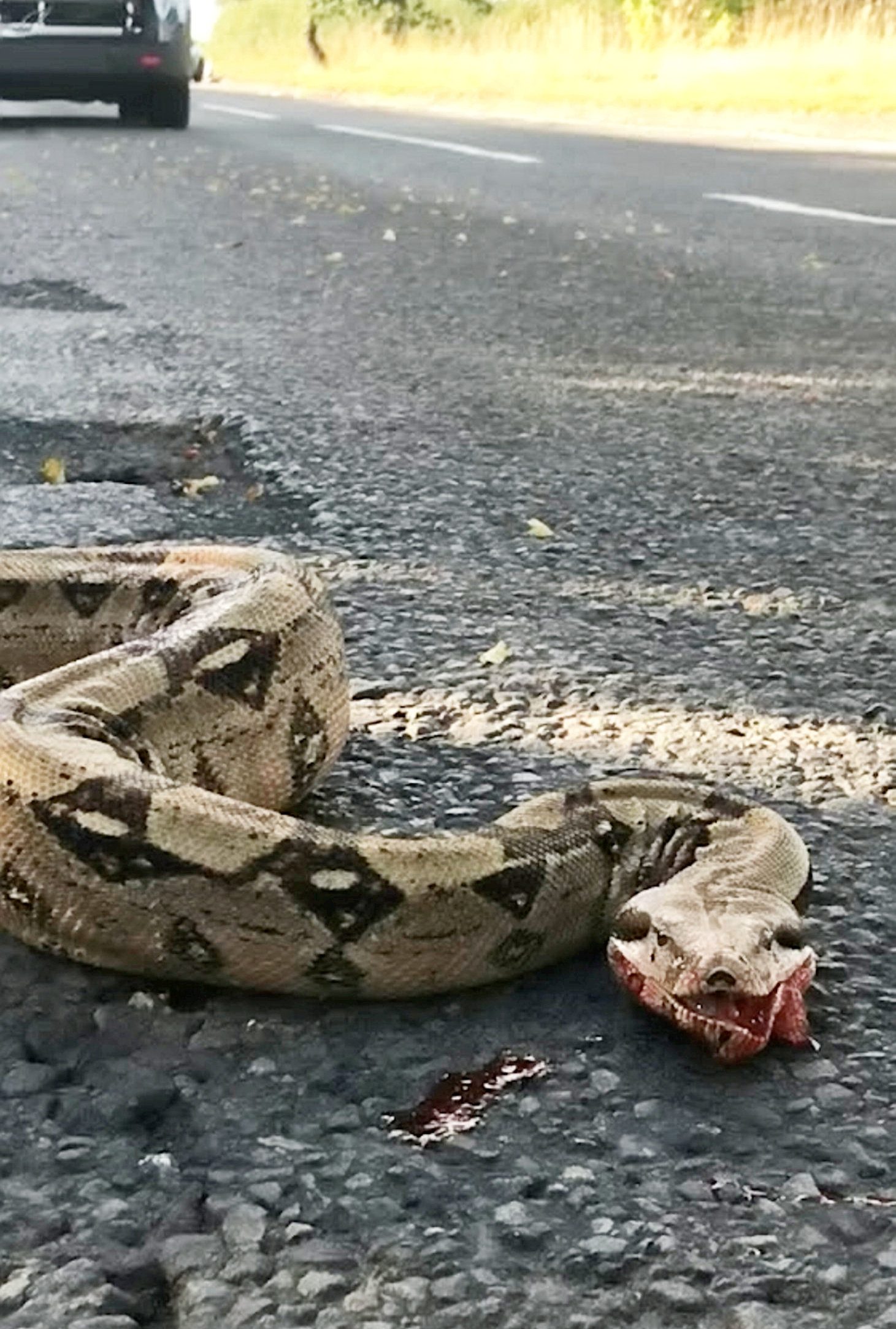 A response team from the RSPCA were called to the bloody scene after the wounded snake was found with a broken jaw by two motorists at around 4pm.

The animal was then taken to a vets and given pain relief but the reptile died later that night.

But, much to the fear of the residents, the body of another long-deceased snake of a similar size was then found nearby – prompting fears that the road is being used as place to dump unwanted exotic pets.

Residents living in the village have since spoken of their fear – claiming they are now concerned about letting their children or pets roam outdoors amid the snake epidemic.

One local wrote on social media: "Is it just me or is this freaking anybody else out? I don't want live 6ft snakes slithering around the village."

Another added: "This is literally the stuff of my nightmares. My skin is crawling just thinking about it."

One resident joked "Where's Samuel L when you need him?" but another put: "This really isn't funny. I'm concerned for my kids and dog. These animals can attack."

Another concurred: "Exactly, they will be hungry. And that's why I don't want to let my pet out. These animals can be brutal killers and would target something small."

Boa constrictors use they jaws – which are lined with hooked teeth – for grabbing and holding prey before squeezing them to the point of suffocation.

Boas are said to "eat almost anything" they can catch in the wild – including birds, monkeys, and wild pigs.

They are non-venomous but their jaws can stretch wide enough to swallow large prey whole.

Following an investigation, the local RSPCA believes both reptiles were deliberately abandoned in the area.

A spokesman said: "Normally when we get a call like this we find the snake has been misidentified and it's actually a small native species, so we were very surprised when we arrived and saw a six-foot boa constrictor on the road.

"It's very sad that this beautiful creature's life ended like this.

"Sadly we think this snake was probably abandoned as it's a very isolated location and there are no houses around for at least a mile.

"The discovery of the body of another snake close by also leads us to believe that someone has deliberately left them.” 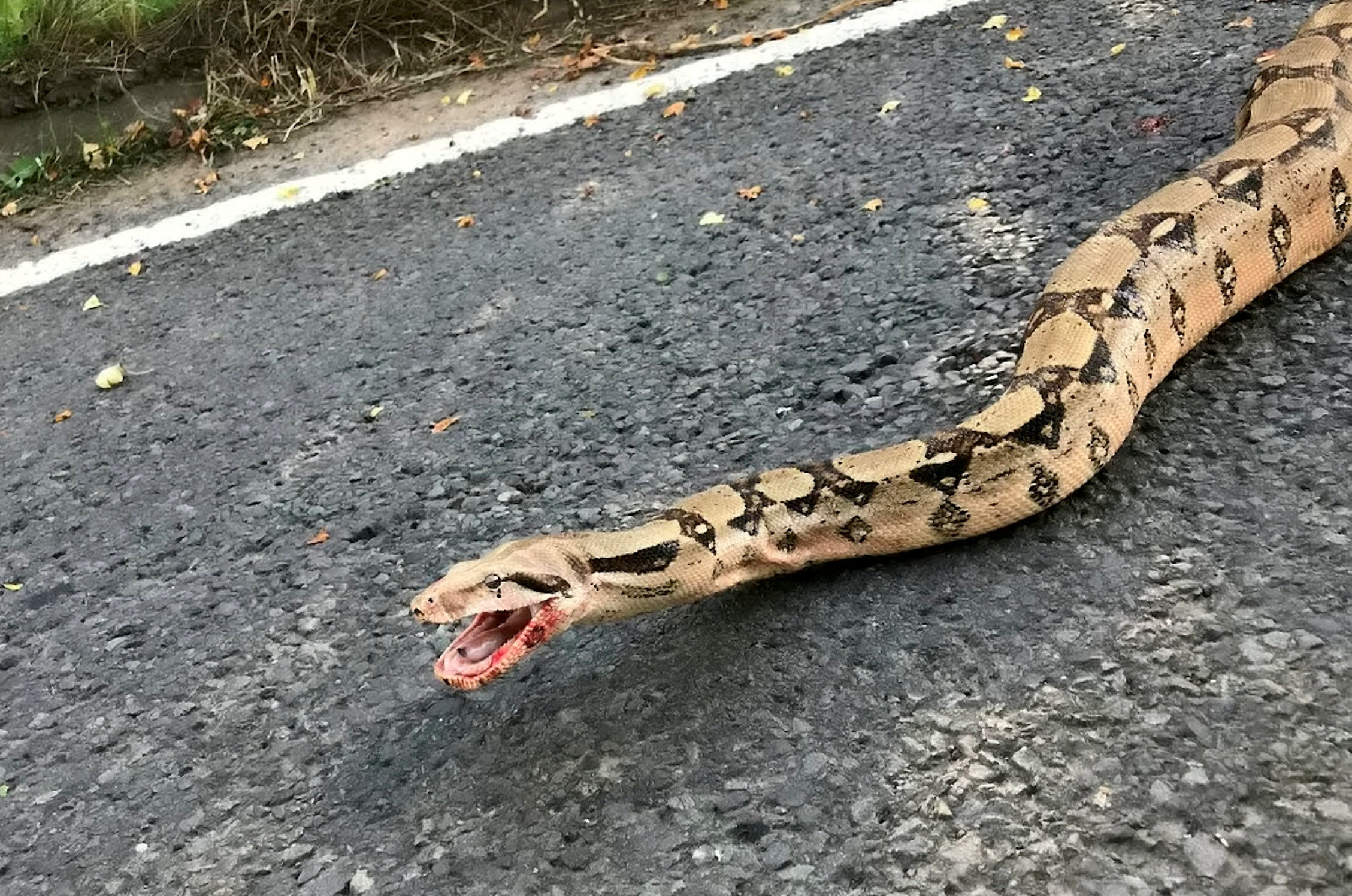 The findings follow a 2016 report that found that snakes were being abandoned in Britain because owners cannot look after them and set them free.

Speaking in 2016, RSPCA animal welfare officer Peter Yarde warned of the dangers of keeping exotic pets, as well as the importance of potential owners carrying out research first so they don't get into a spin when their snake starts to shed its skin.

Caring for exotic animals can be challenging and expensive, for they still have the same needs as in the wild, which must be met in captivity by law under the Animal Welfare Act.

He said: "Buyers who do not do their homework may not know how to cope when their pet reaches full size, becomes aggressive, lives longer than expected or requires paperwork to be legally kept or sold.

"Vital tips on caring for exotic pets may not be provided by sellers and can be hard to find online.

"Information is available at www.rspca.org.uk, to help potential buyers make an informed decision."