A boxing promotion company was allowed to run a combat sports event in Melbourne despite police warnings of the potential for acts of violence from attendees.

Correspondence from a senior Victoria Police officer reveals the force had “received information and hold concerns,” about the event held by Punisher Promotions in Kensington on July 10.

“The concerns held relate to the potential for acts of violence of attendees or affiliates of some at this event due to linked incidents involving shootings, stabbings, brawls and serious assaults,” acting Superintendent Troy Papworth wrote on June 15.

A Victoria Police spokeswoman confirmed the force regularly conducted “risk assessments prior to events to ensure the safety and security of the community”.

“Police identified a risk for an event which took place in July in Kensington and engaged with the venue and relevant industries prior to the event. For operational reasons, Victoria Police does not comment on intelligence holdings or individual companies,” the spokeswoman said.

A spokesman for Punisher Promotions said there were no violent incidents at the event, which included a bout for the Pacific title between Suleiman “Sam” Abdulrahim and Ivan “The Flash” Kolar. 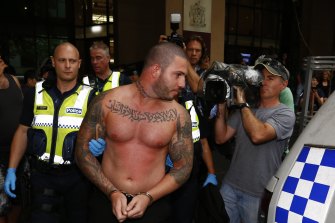 Suleiman Abdulrahim is arrested outside the Magistrates Court after a wild brawl in 2015.Credit:Eddie Jim

“The show went off without a hitch, there were no incidents and it was a full crowd,” the spokesman said.

As well as participating in the bout, Abdulrahim is a former director of a company called Power Promotions Pty Ltd, which controls the business called Punisher Promotions. He previously fought under the name “The Punisher”.

Abdulrahim was convicted of culpable driving after he caused the death of an elderly woman while driving a high-powered Ferrari 360 Spider at almost 50 kilometres over the speed limit on the wrong side of the road.

He stepped down as director of Power Promotions in March this year but continues to be involved with Punisher Promotions, according to police and boxing sources.

The Punisher Promotions spokesman denied Abdulrahim had any involvement since he resigned as a director and insisted the business had not been named after him. 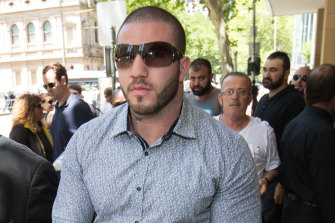 Abdulrahim outside court in 2016.Credit:Jason South

“It was just a name we came up with at the time,” the spokesman said.

A website for Punisher Promotions still features video and images of Abdulrahim, who was also involved in a wild brawl inside the Melbourne Magistrates Court in 2015 with another kickboxer, Omar Bchinnati.

Bchinnati was later wounded, and another man killed, outside a boxing event at the Melbourne Pavilion in Kensington in March 2019 which did not involve Punisher Promotions or Abdulrahim.

Simone Bailey, chair of the Professional Boxing and Combat Sports Board, told The Age that Phil Eglezos was the registered promoter for Punisher Promotions, who had undergone an “approvals process which can be reviewed at the request of the police at any time”.

“We rely on the advice of the Chief Commissioner of Victoria Police to determine whether combat sports events applicants are fit and proper persons to stage events, to be matchmakers, to be trainers and to be officials, and whether it would not be in the public interest to issue a licence to an applicant,” Ms Bailey said.

A spokesman for the Melbourne Pavilion in Kensington, declined to discuss the boxing event staged by Punisher Promotions in July, but insisted it had no dealings with Abdulrahim.

The spokesman said he was unaware of any concerns held by police about the event.

Last November, The Age revealed that Abdulrahim and his father, Farouk, launched legal action against the State of Victoria over claims they were assaulted by protective services officers after the brawl involving Bchinnati in 2015.

Victoria’s busiest court was evacuated after pepper spray was used to subdue the stoush. Abdulrahim received an assault conviction and a $2000 fine over his role in the fight.

Both Abdulrahim and his father are named as plaintiffs in a writ filed in the County Court last year that alleges police breached the duty of care owed to the pair by failing to exercise reasonable care for their safety. 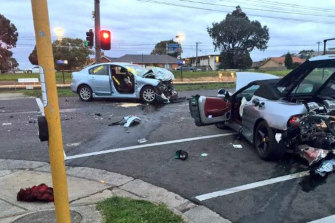 The scene of the fatal high-speed crash in Reservoir that Abdulrahim was involved in. Credit:Nine News

Five months after the altercation in the Magistrates Court, Abdulrahim was driving a Ferrari 360 Spider almost 50 kilometres over the speed limit on the wrong side of the road when he clipped two vehicles and ploughed into a Mazda sedan in Reservoir.

Nursing home resident Muriel Hulett, 88, who was a passenger in the Mazda, died after eight days in a coma. She had suffered extensive neck and chest injuries. Her daughter Lynette survived horrific injuries.

Abdulrahim was subsequently sentenced to three years and three months in jail, with a non-parole period of two years.

He was released on parole in March 2019. However, his parole was revoked months later because of several attempts on his life.

Lawyers for the Adult Parole Board told the Supreme Court that Abdulrahim had been the intended target of two shootings and another firearm incident. It was claimed, at the time, that he was a risk to the public by being out of jail.

But that decision was later overturned and Abdulrahim was freed, once again, to continue his boxing career.