This is the eye-popping moment a cyclist got his comeuppance after pushing a wheelie rider out of his way.

The cyclists were spotted riding in a group along the cycle lane in east London  when two of them collided into each other head on.

A video shows a man wearing a blue helmet and back stretch out his arm and rudely push a young man in the middle of doing a wheelie, The Sun reports.

Against the odds, the youngster manages to stop from falling by putting his foot on the ground

It is instead the aggressor whose bike flops sideways and he embarrassingly ends up falling down. 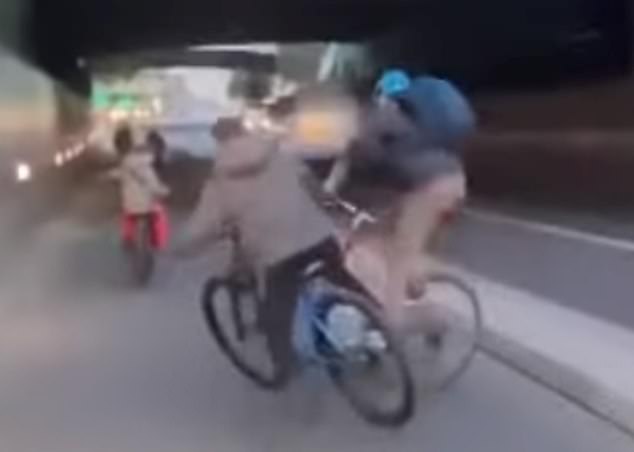 He rolls several times on the pavement before coming to an abrupt stop.

Footage of the incident, which was filmed on the super cycle highway’ heading to east London along the Thames, has been shared widely on social media with over 22,000 views on Twitter.

One person said: ‘As a rider myself – the amour of other riders who overtake without a bell to warn you is unreal – a quick ring woulda stopped this.’

Cyclescheme says: ‘You don’t want them to be surprised and wobble – into you or the kerb.

‘Don’t swing left too soon after you pass. If your back wheel clips their front wheel, you’ll knock them off.’ 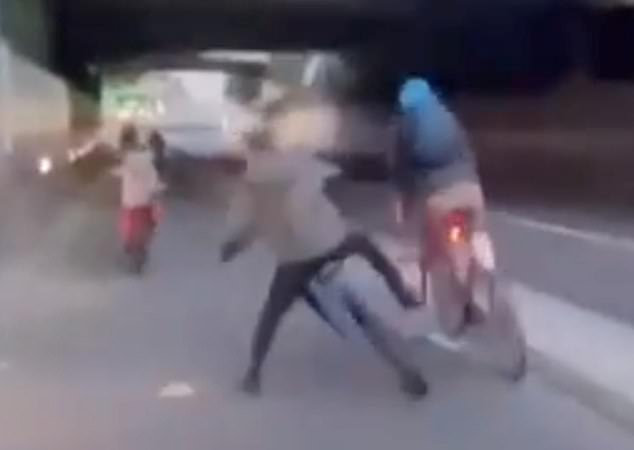 It emerged in August that cyclists could be forced to have registration plates, insurance and observe speed limits under a radical shake-up of road traffic laws.

Almost 10 million people in England cycle for leisure, health or work every week and Britain’s roads have seen a boom in bikes as more people take to the road.

Cyclists caught jumping a red light by the police risk a £30 fixed penalty fine, but enforcement of the legislation has fallen while it has increased for motorists.

And there is a growing belief among Government Ministers that riders should be forced to abide by the same rules as drivers, with identifiable markings required on their bikes.

Speaking at the time, then-Transport Secretary Grant Shapps told the Daily Mail: ‘I’m proposing there should be a review of insurance and how you actually track cyclists who do break the laws [via identifiable markings].’

Mr Shapps added that he could ‘see no reason why cyclists should break the road laws and be able to get away with it’.