Exodus: Biblical scene as thousands flee Taliban-held Afghanistan walking miles through the desert across the Pakistani border and into Iran

Remarkable footage shows the truly epic scale of the exodus of Afghans fleeing their country to head west.

The almost-biblical scenes of the mass migration across the desert where the borders of Afghanistan, Pakistan and Iran all meet shows an endless river of people flowing between the mountains.

And for British politicians concerned about an influx of migrants to Europe, these images will confirm their worst fears. 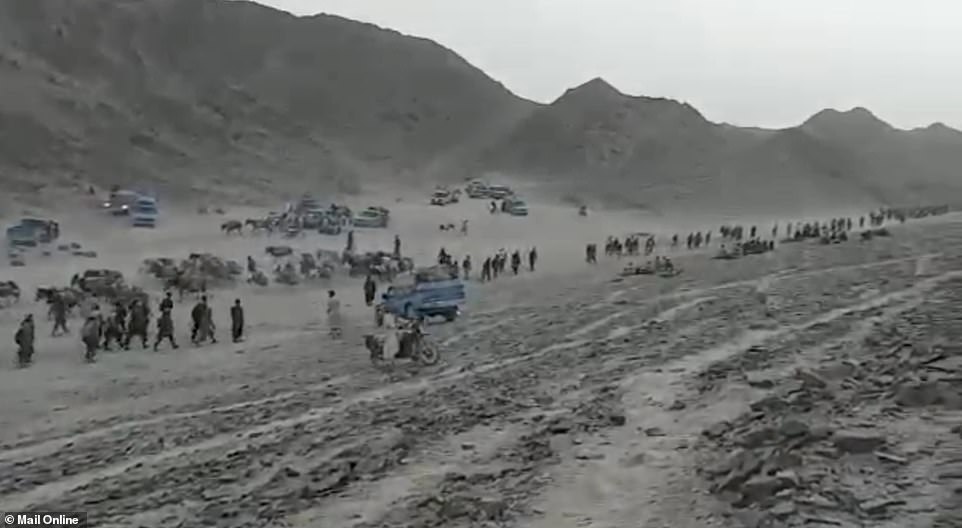 The mass migration across the desert where the borders of Afghanistan, Pakistan and Iran all meet shows an endless river of people flowing between the mountains 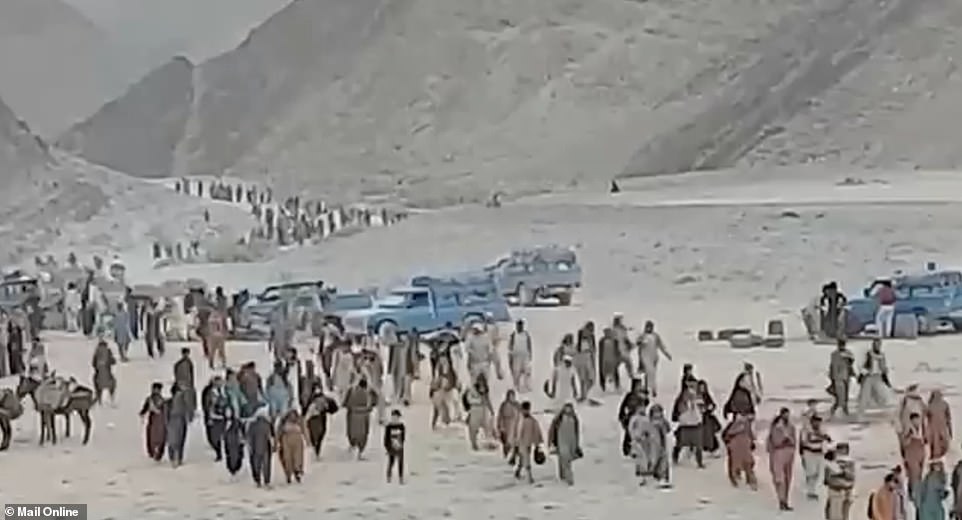 In the footage, with the human caravan stretching back as far as the eye can see, few words are spoken 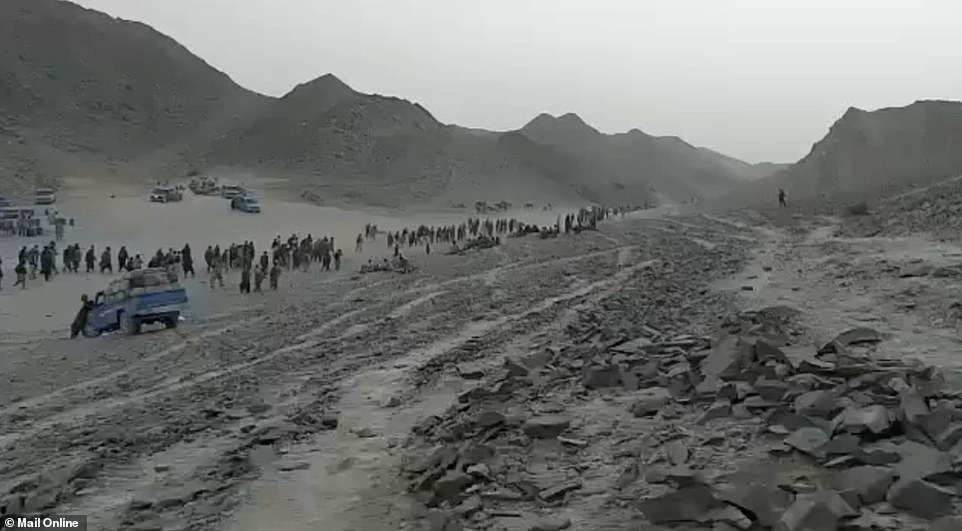 For these men, women and children, their initial destination is likely to be Turkey, still more than 1,000 miles away across Iran

For these men, women and children, their initial destination is likely to be Turkey, still more than 1,000 miles away across Iran, and from there many of them will hope to come to Europe and Britain.

A migrant who recently made the same journey said the stretch shown is at the end of a four-hour trek through rough terrain, where the Afghan refugees, having travelled briefly through Pakistan, continue their journey with Iranian people smugglers.

He said: ‘These are the poorest people, because there are other ways which involve less walking, but those routes cost more.’

In the footage, with the human caravan stretching back as far as the eye can see, few words are spoken, and only the sound of goats being herded in the other direction can be made out.

The recent migrant described his journey along the same route: ‘After more than four hours of walking, we arrived in a valley and waited for darkness. 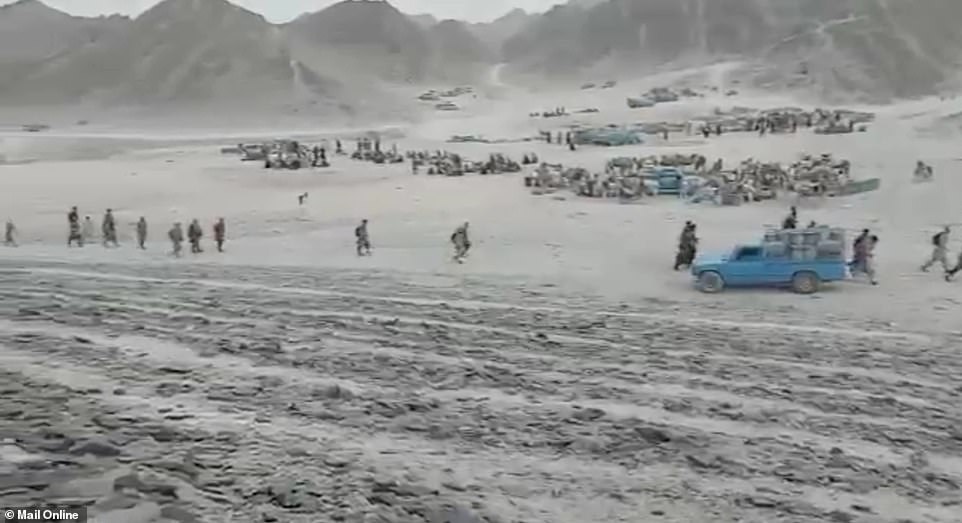 Migrants who have survived the journey speak of the chaos they have seen with thousands of vulnerable and elderly people now making the perilous trip, desperate to escape the clutches of the Taliban 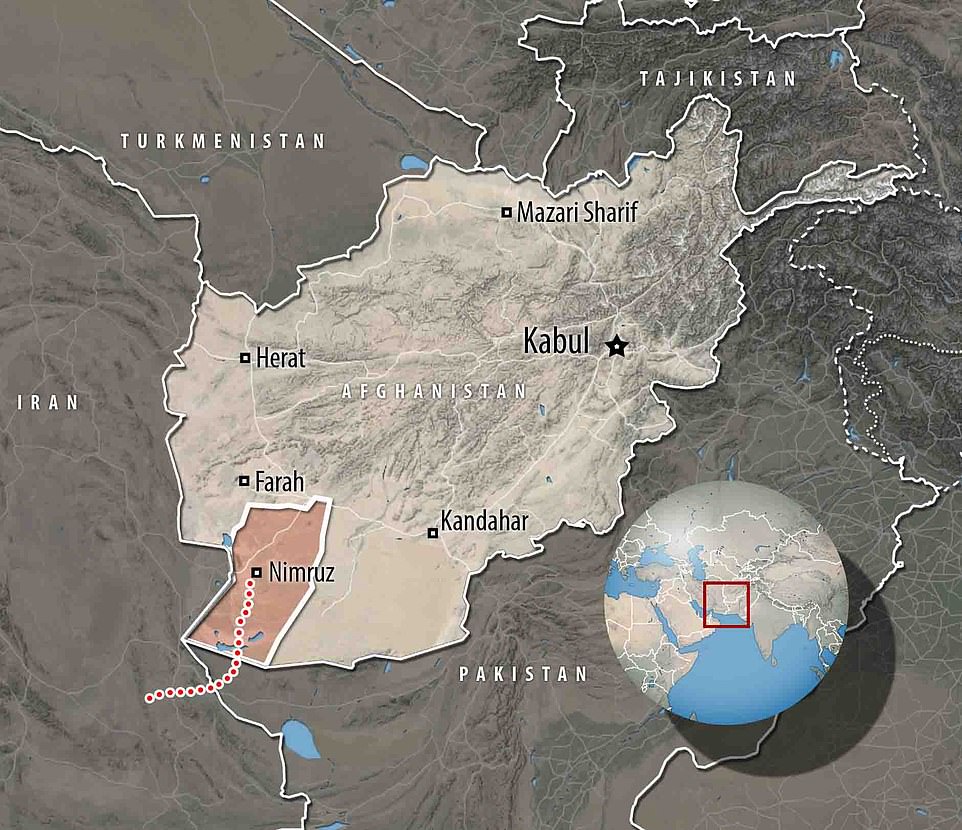 ‘At around 10pm Iranians came and they asked everyone for a code, or a keyword.

‘Then after everyone found his smuggler, we were divided into groups, each group with its own smuggler. Then we moved towards Iran, group after group.

‘I went through this way several times in the past. Previously there were maybe 200 or so, people but this time it was chaos.

‘Thousands were there. I saw women heavily pregnant, babies, old men. I remember the sound of crying babies echoing across the mountains.’

Yesterday, Filippo Grandi, the UN High Commissioner for Refugees, forecast that the evacuations from Kabul airport were just the beginning of ‘a far greater humanitarian crisis’.

His agency has estimated that up to 500,000 Afghans could flee their country, and appealed for continued support from Afghanistan’s neighbours and the world community.

He said: ‘The scenes at Kabul airport these past few days have sparked an outpouring of compassion around the world at the fear and desperation of thousands of Afghans.

‘But when these images have faded from our screens, there will still be millions who need the international community to act.’ 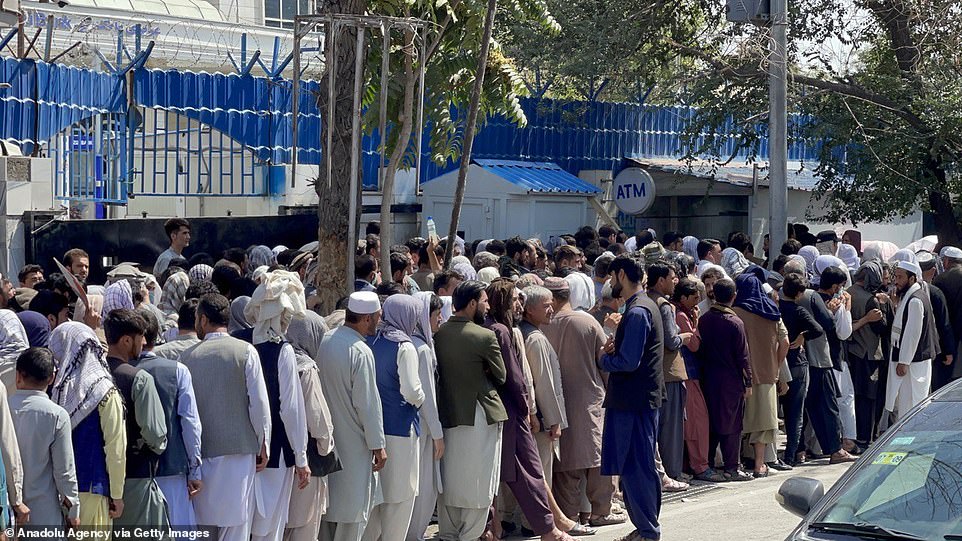 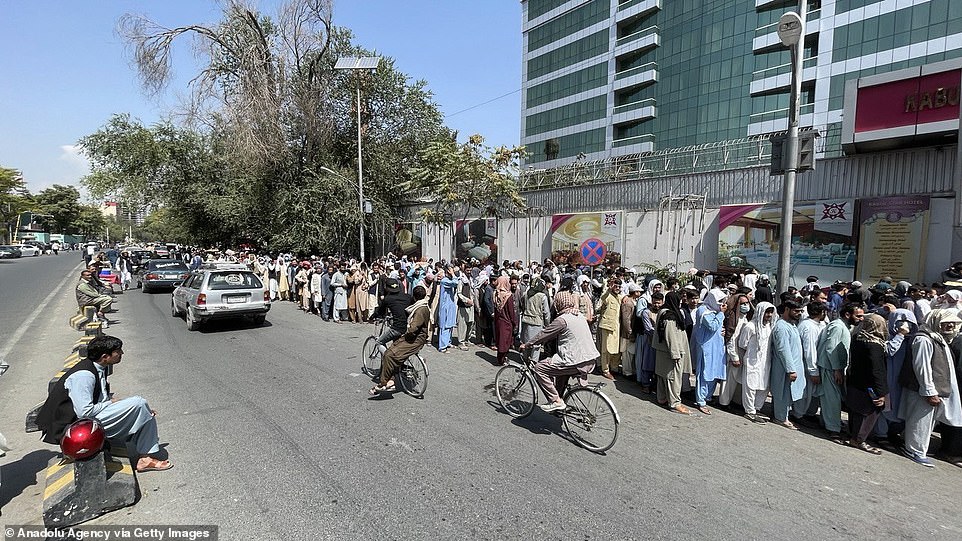 Meanwhile, long queues outside banks and soaring prices in the bazaars underlined the everyday worries now facing its population after the spectacular seizure of the city two weeks ago.

For the Taliban, growing economic hardship is emerging as their biggest challenge, with a sinking currency and rising inflation adding misery to a country where more than a third of the population lives on less than $2 a day.

Even for the relatively well-off, with many offices and shops still shut and salaries unpaid for weeks the daily struggle to put food on the table has become an overwhelming preoccupation.

‘Everything is expensive now, prices are going up every day,’ said Kabul resident Zelgai, who said tomatoes which cost 50 afghani the day before were now selling for 80.

In an effort to get the economy moving again, banks which closed as soon as the Taliban took Kabul have been ordered to re-open. But strict weekly limits on cash withdrawals have been imposed and many people still faced hours of queuing to get at their cash. 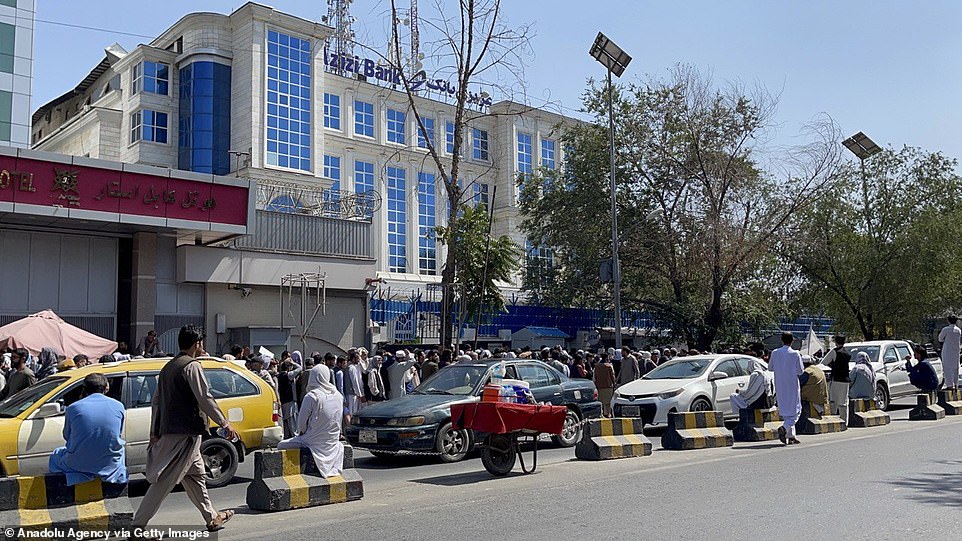 For the Taliban, growing economic hardship is emerging as their biggest challenge, with a sinking currency and rising inflation

A Qatari aircraft has landed in Kabul carrying a technical team to discuss the resumption of airport operations after the Taliban takeover of Afghanistan, according to a source with knowledge of the matter.

‘A Qatari jet carrying a technical team has landed in Kabul earlier today to discuss the resumption of operations in the airport,’ the source told AFP.

The Taliban has also called on fighters in the holdout bastion of the Panjshir Valley to lay down their arms, as the resistance movement said it had repulsed heavy attacks.

The rugged mountain valley with towering snow-capped peaks – which begins around 50 miles north of the capital Kabul – is the centre of Afghanistan’s most important pocket of armed anti-Taliban forces. 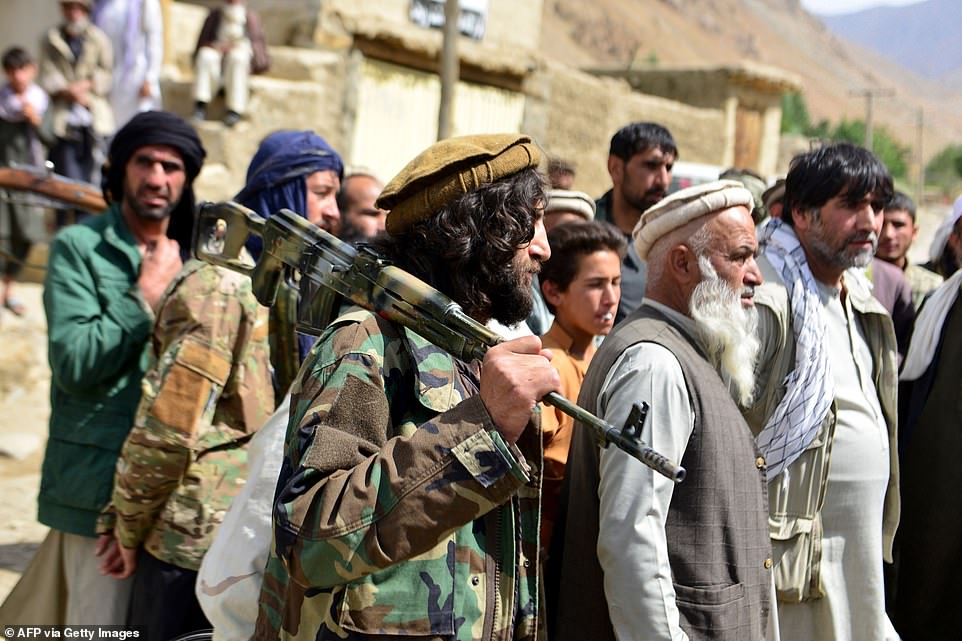 The National Resistance Front (NRF), comprising anti-Taliban militia fighters and former Afghan security forces, have vowed to defend the enclave as the Islamist group sends fighters to encircle the area.

‘My brothers, we tried our best to solve the Panjshir problem with talks and negotiations… but unfortunately all in vain,’ senior Taliban official Amir Khan Muttaqi said, in an audio message to the people of the Panjshir posted on Twitter.

‘Now that the talks have failed and Mujahiddin (Taliban) have surrounded Panjshir, there are still people inside that don’t want the problems to be solved peacefully,’ he added.

‘Now it is up to you to talk to them,’ the Taliban message to the Panjshir people said. ‘Those who want to fight, tell them it is enough.’ 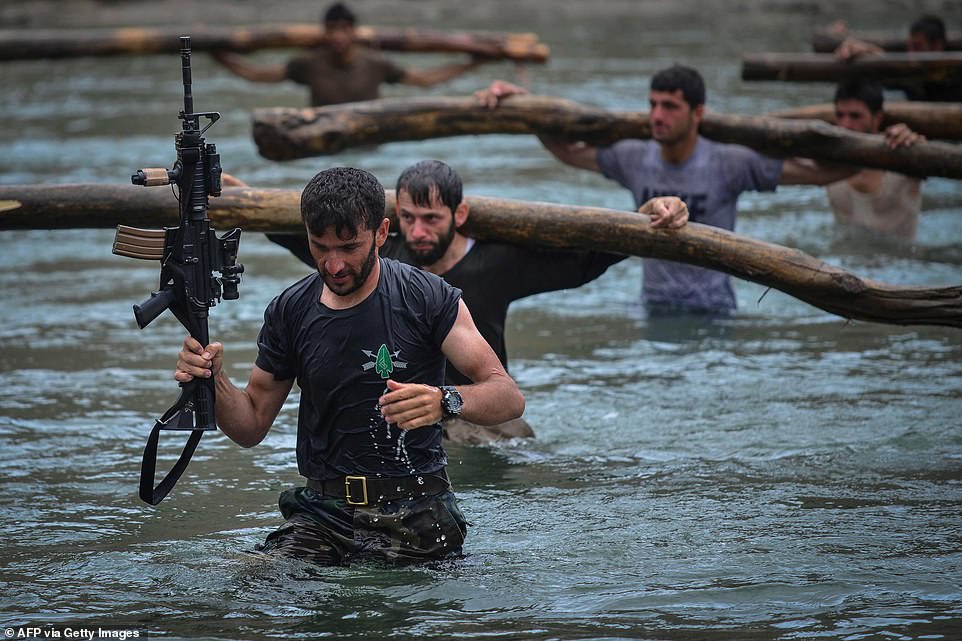 The Taliban has called on fighters in the holdout bastion of the Panjshir Valley to lay down their arms, as the resistance movement said it had repulsed heavy attacks

‘Our people should not worry. They retreated with heavy casualties.’

Residents and fighters in Panjshir, many of whom fought the Taliban when they were last in power from 1996 to 2001, offered a defiant message.

‘We are ready to defend it till the last drop of our blood,’ said one resident.

‘Everyone has a weapon on their shoulder and ready to fire,’ another said. ‘From the youngest to the oldest, they all talk about resistance.’