But her pet is not a cat or dog or even a rabbit. Ms Heness has a pet spider living on her kitchen window sill. 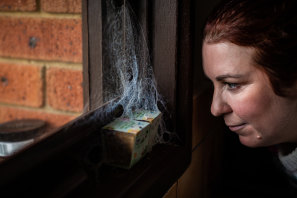 Tracy Heness with her pet spider’s ‘house’ of seed boxes on the kitchen window sill.Credit:Scott McNaughton

And while the as-yet-unnamed spider doesn’t greet her or sit on her lap, Ms Heness is fond of the shy, “beautiful” arachnid with the fluffy brown-black torso and shiny black legs.

The 43-year-old hospital emergency nurse often sprays water on the spider’s web for it to drink, and catches live flies for her to eat.

Ms Heness said her partner Damian, 46, was initially horrified — “he loves a neat, tidy house” — and had previously been inclined to whack spiders.

She said he “freaked out” in March 2020 when she brought her spider along in a container while moving into his house in Endeavour Hills, in Melbourne’s south-east. Ms Heness says he’s softened now and even feeds the critter.

“I just rocked up with her in a box and said ‘I’ve brought my spider’,” Ms Heness said. “It took him a while to even comprehend what I was saying. He thought I was a bit crazy.”

She first noticed the-then baby spider – a native black house spider or Badumna insignis – two years ago in her previous home, at Kilsyth, scooting in and out of a cardboard seed box on the indoor kitchen sill.

”When I was moving out, I thought, ‘I’m used to having her there.’ I thought my housemate would squish her, so I scooped her up in a container and brought her over here [to Endeavour Hills], much to my partner Damian’s horror, and popped her on the shelf.“

Ms Heness expanded the spider’s “house” to two boxes. She tidies up the web if it’s got too big overnight. 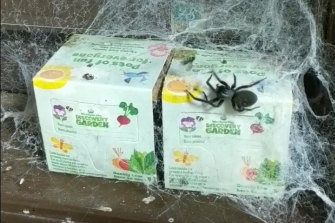 Ms Heness often feeds her ‘little girl’ a fly, or flicks water on to her web for her to drink.Credit:Tracy Heness

Does she consider the spider a pet? “Yeah, I guess. I love having her on the shelf. It’s definitely not like my dog [a 65kg great dane called Sheeta] but I’ve got a little bit of love for her, for sure.″⁣

“I’ve had her for a couple of years now, so I’ve certainly gotten used to her being there.”

Ms Heness is happy her spider is “living her best little spidey life” being protected from cold, being fed and watered, with a nice view of the garden. “For a spider, I think she’s got a great little life.” 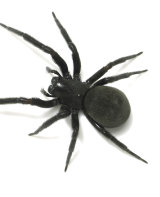 Earlier this month, Ms Heness sought to know more about the spider by posting on the Facebook site ‘Australian spider identification page’, including a Gif showing her pet catching a fly, and a spiel saying it was “a story of what true love can achieve”. (Referring to Damian, her partner’s acceptance of her spider).

Many posts were admiring. Sharon Picking said: “Oh my heart … this is so beautiful.”

Another response was more alarming: “I had one in our bathroom that I looked after for a while. One morning I walked into the bathroom and there were babies EVERYWHERE I counted 48 but there were more.”

Many others told of their own pet spiders. Emma Selan said: “My Little one lives in our bedroom, she takes care of the flies in here and we’re more than happy. I feed her and mist her web.”

Ms Heness says some people are “grossed out” but she has never been frightened of spiders. She says they’re safe if you don’t handle them, and they control pests. ”If you’ve got spiders in the house you’ll be pretty bug-free,” she says. I’d much rather have spiders than flies.

Her own phobia is clowns. If she saw one “Oh, God, I’d turn the other way and get away from it as soon as possible. That’s kind of my nightmare.”

He said Ms Heness showed empathy for nature. He said most people don’t have affection for invertebrate, non-cuddly creatures.

He said invertebrates are “the little things that run the world” and “if we didn’t have spiders we would have massive plagues of insects”.