Families ran from the sea last week after a shark ‘fin’ was spotted off the Kent coast just weeks after a horrific attack on a swimmer by a shark in Cornwall.

The reported sighting was just 150ft, or 45m, off the coast, The Sun reports, where children were enjoying an evening paddle.

Two boys initially spotted the fin, prompting one to yell: ‘Is that a shark?’

They and multiple others in the sea then rushed back to the sand on The Warren beach near Folkestone.

Mother Emma Horne, 30, told the Sun she was at the beach with her two children Finley, 7, and Alby, 5.

She managed to record footage which showed the fin, thought to belong to a basking shark, circling off the coast. 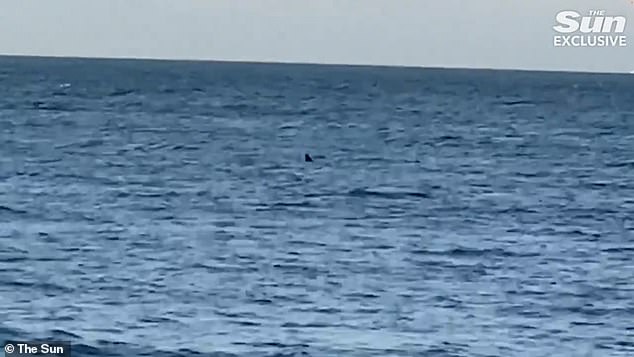 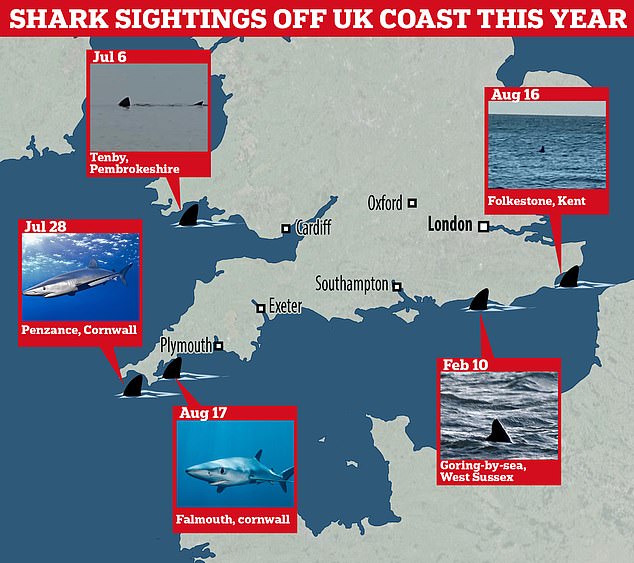 She said: ‘We couldn’t believe it. The boys were playing in the water so I got them out quickly.

‘I warned people and a woman quickly called her dog out of the sea. She was worried.

‘Finley and Alby were playing with their nets so we told them to get out then watched it from a distance. They were loving it afterwards — they asked if they could catch it!’

The shark sighting is the most recent of many spotted in British waters in the last year, with this summer seeing the first shark attack in the UK since the 19th century.

In February, experts feared the UK’s first Great White Shark had been spotted off the coast of West Sussex after beachgoers spotted a distinctive triangular fin in the water.

Sailors near Tenby, Pembrokeshire were shocked when a massive basking shark – around 12ft long – passed them by just after they had been swimming in shallow water on July 6. 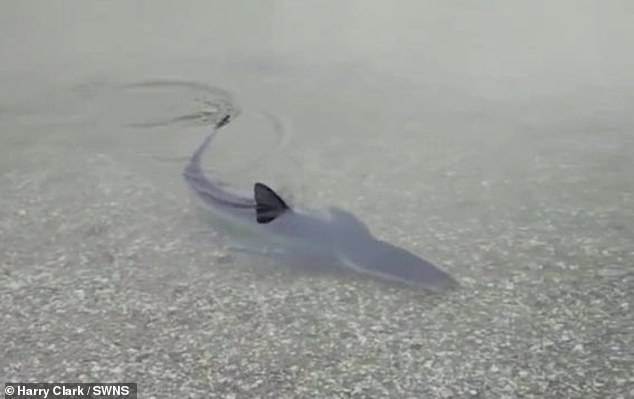 The most shocking case of all this year was when a woman was bitten by a shark off the coast of tourist hotspot Penzance in Cornwall in late July.

The swimmer was left ‘screaming for help’ after the shark bit into her leg, leaving ‘blood everywhere’ in what is thought to be the first attack of its kind in 175 years.

The unnamed woman was attacked by the shark unprovoked and left badly shaken while snorkeling on a £180 trip 15 miles off the Cornwall coast. The Sun reported she may need minor plastic surgery to recover from the vicious bite.

She was rushed back onto the boat and given first aid before being taken back to shore where she was treated by paramedics.

In a statement put out by the trip company, the bite victim said: ‘What was a very scary incident was made so much easier by the kindness and calmness of the people around me.

‘Thank you to the trip team for getting me back to shore quickly and carefully and making me feel as safe as I possibly could.

‘We all take these risks when we enter the habitat of a predator and we can never completely predict the reactions of a wild animal.’

Further shark sightings have frightened holidaymakers since the shocking attack, including the shark seen by the Horne family off the coast of Folkestone, Kent last week.

Yet another shark was spotted approaching the River Fal close to Falmouth on the Cornwall coast in mid-August.

The blue shark was seen lurking in shallow water by a popular beach. Some experts were concerned that due to the shark’s unusual location and slow movements it might be unwell or disoriented.