The US will undertake a day of national mourning tomorrow as they commemorate 9/11. The deadly attack went down in history as a global flashpoint with far-reaching consequences. The implications remain today, enshrined in law and fresh in the minds of millions.

The September 11 attacks came as the most deadly modern terror attack, and most devastating on US soil since Pearl Harbour.

The attack began in the early hours of September 11, 2001, with American Airlines Flight 11, carrying 81 passengers and 11 crew members, which was hijacked over central Massachusetts at 8.14am.

Five hijackers steered the aircraft south towards New York and crashed into the north face of the World Trade Centre’s North Tower at 8.46am. 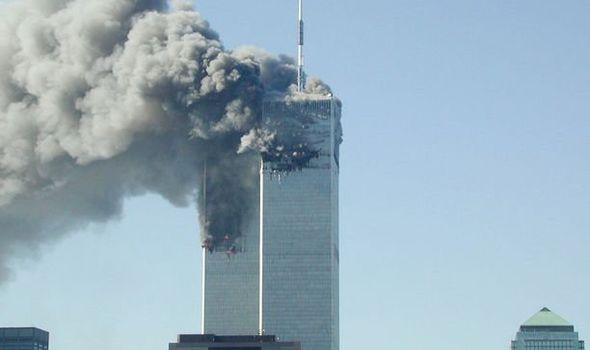 They steered the aeroplane southeast and crashed it into the south face of the South Tower at approximately 9.03am.

American Airlines Flight 77 was hijacked at 8.20am, carrying 58 passengers and six crew members, and crashed into the Pentagon at 9.37am.

A fourth and final flight 93, carrying 37 passengers and seven crew members, was hijacked at 9.28am and crashed in Somerset County, Pennsylvania at 10.03am after fighting in the cockpit.

Counting the casualties of the aeroplanes alone, 265 people died.

Casualties also included people at work in the World Trade Centre, Pentagon, and people living in or nearby ground zero.

Official figures state a total of 2,977 people died in the attacks, and 19 hijackers committed murder/suicide.

DON’T MISS
9/11: How mother’s warning prompted passengers to overthrow terrorists – ANALYSIS
9/11: Why did pilots fail to trigger basic hijack defence procedure? – EXPLAINER
9/11: How US forces made mistake leaving them ‘unprepared for attack’ – INSIGHT

The youngest identified victim was just two years old at the time, and the oldest 85.

Men made up approximately 75-80 percent of the total.

Officials have not yet found every victim, as data from the medical examiner’s office in 2019 shows up to 40 percent of those who died remain unidentified.

People died long after the initial attack, however, due to complications from its effects.

One of the first victims, a woman named Felicia Dunn-Jones, died in 2002 due to what medical examiners deemed dust exposure.

September 11 became a national holiday some months after the attack.