A group of whale watchers got the thrill of their lives when a gray whale gave birth to a calf right next to their small boat on Jan. 2 at Dana Strands Beach in Dana Point, California.

In a YouTube video shared by Captain Dave’s Dolphin and Whale Watching Safari, the mother-and-baby duo can be seen swimming alongside the boat to the delight of the thrilled spectators on board.

“This is a first for all of us. We’ve never seen this actually happen,” the boat’s guide can be heard telling passengers.

The whale and her calf continue to swim together as the passengers can be heard marveling over the rare sight.

“At first, the sighting appeared to be a typical migrating gray whale. As the boat slowly approached the animal, our crew noticed it was behaving sporadically. Passengers and crew saw something orange and red colored in the water that they thought might have been kelp. Instead, a newborn calf came up to the surface!” the whale-watching tour company wrote in the caption of the video.

“For a minute, many of us thought it may be a shark or predatory event. But no, instead of the end of life, it was the beginning of a new one!” the company continued.

“The female even brought the calf over to the boats as if to show off her offspring and say hello,” it added. 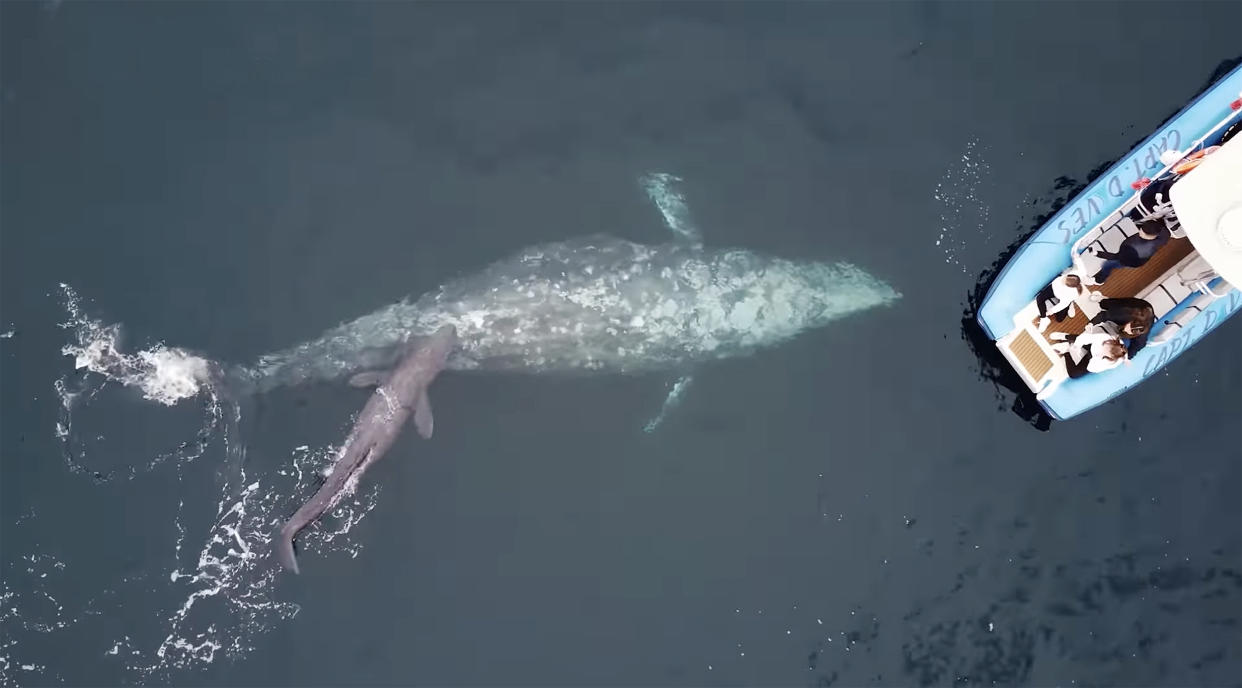 Gray whales can grow to nearly 50 feet in length and weigh an average of 90,000 pounds, according to the National Oceanic and Atmospheric Administration. They are found mainly in shallow coastal waters in the North Pacific Ocean; however, during migration, they can be found far from shore. They normally give birth in early January to mid-February off the coast of Baja California, Mexico.

This isn’t the first time a whale has recently come into close contact with a small boat.

In October, a massive humpback whale leaped up from the sea mere feet from a father and son who were fishing in an 18-foot Starcraft vessel off the New Jersey shore near Belmar.

The son, Zach Piller, captured the amazing moment on video. In the footage, dozens of small fish can be seen jumping from the ocean just before the humpback’s enormous head crashes through the water next to the duo’s boat.

“Oh —!” the pair are heard screaming as the whale breaches the surface, its mighty head coming within inches of their fishing poles.

The whale then splashes back down into the water and moments later, it disappeared into the ocean again.

This article was originally published on TODAY.com