London: Scotland's First Minister Nicola Sturgeon on Tuesday (Wednesday AEST) pledged to publish draft legislation for a new Scottish independence referendum, including the question and timing of the vote, before the country's parliamentary election next year.

Sturgeon, who heads Edinburgh's pro-independence devolved government, put on hold plans for a second referendum in March to concentrate on the coronavirus crisis.

However, the most sustained support for Scottish independence in the modern era has prompted nationalists to renew their push for another vote. 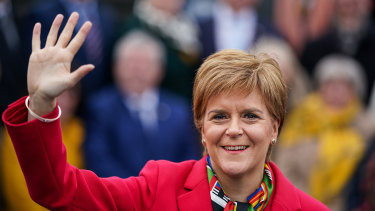 "Before the end of this parliament, we will publish a draft bill setting out the proposed terms and timing of an independence referendum as well as the proposed question that people will be asked in that referendum," Sturgeon said.

Perceptions that British Prime Minister Boris Johnson has responded slowly to the COVID-19 pandemic and Scots' anger over the UK's decision to leave the European Union has led for the first time to sustained support of over 50 per cent for independence. Scottish voters opposed leaving the EU in a 2016 referendum. 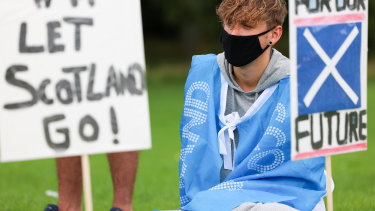 Supporters of Scottish independence gather at the site of the battle of Bannockburn in Bannockburn, Scotland.Credit:Getty

If Scotland voted for independence it would mean the United Kingdom would lose about a third of its landmass, almost a tenth of its population, a core ingredient of its identity, and rip apart the world's sixth-biggest economy.

Next year's election to the devolved parliament is expected to provide a fresh platform for the Scottish National Party to press for a new referendum. The nationalists are expected to win a majority and aim to use that mandate to push Johnson to grant a fresh vote on the issue.

However, it is ultimately up to the British parliament to decide whether Scotland can hold another referendum, and Johnson’s Conservative government in London has repeatedly said it will reject any demand for a fresh vote.

Instead, Johnson's government is re-emphasising the economic advantages to Scotland of remaining in the United Kingdom with England, Wales and Northern Ireland.