Schoolchildren are being left outside in the rain and sitting in freezing classrooms because of unclear Covid advice from Government, parents say

Parents say their children are being left outside in the rain and sitting in freezing classrooms because of unclear government Covid-19 advice, parents have said.

Government ministers are facing calls to ‘urgently’ provide schools with clarity over plans for ventilating schools over winter after they were advised to keep windows and doors open to aid ventilation in a bid to prevent the spread of the virus.

Education chiefs have also instructed school staff to ensure outdoor space is used as much as possible which parents say means their children have forced outside in severe weather. 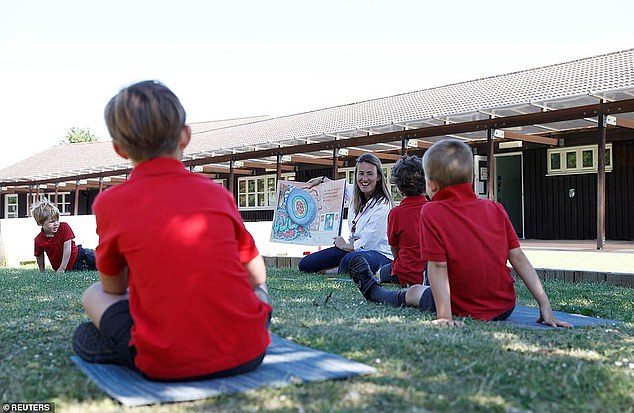 Education chiefs have instructed school staff to ensure outdoor space is used as much as possible, but parents worry that this means their children will have to sit outside in the cold

Aberdeen City and Aberdeenshire Councils are awaiting further guidance from the Scottish Government for the colder months.

One parent, who asked to remain anonymous, said children were spending their breaks outside in playgrounds in Aberdeenshire.

She said: ‘On very severe weather days the children are out for a sustained period of time in the pouring rain.

‘You wouldn’t put an adult out for their lunch in that, and you wouldn’t even put your dog out.

‘The schools are interpreting the guidance passed down from the Scottish Government far too literally and are making the children go out in all weather.’

Another said she had been told to make sure her child ‘wrapped up warm’ for attending another school due to the guidance.

She added: ‘I’ve had an email from my daughter’s school saying the council has told schools they are to have the heating on constantly, but the windows open.

‘Her school is a crumbling old Victorian building as it is, so that won’t be fun for the kids I’m sure.

‘Plus, there’s the waste of money and heat – not to mention the environmental implications of using and wasting all that energy.’

A letter sent to parents of children attending Greenbrae Primary in Aberdeen also reads: ‘As you are all aware we need to keep the school well ventilated by keeping windows open despite the temperature.

‘With this in mind, can I encourage to provide your child with an extra layer of clothing to wear in the classroom, on top of school uniform, such as a fleece.

‘Can I also ask you to provide your child with appropriate waterproof clothing for all weathers.

‘We will be encouraging the children to go out for break and lunch unless the weather is extreme.’

Highlighting the issue was Stuart Lock, chief executive of Advantage Schools in Bedford, who tweeted last week: ‘School was cold today – and much worse for pupils and teachers’

A Holyrood spokesman said: ‘Our guidance for reopening schools states there should be adequate levels of ventilation as evidence suggests this can limit the spread of Covid-19.

‘Local authorities and schools are best placed to make arrangements on how to ensure there is adequate ventilation.’

But the Scottish Government also said its advice would be reviewed as we head into the winter months.

He said: ‘Schools urgently need more advice about what to do after the holidays.

‘Parents are well within their rights to worry about their children sitting in freezing classrooms.

‘We don’t want pupils to fall ill and possibly cause alarm. The SNP must publish guidance for councils before that happens.’

Parents at one school in Norfolk said their children were left ‘almost blue’ and ‘shivering’, while teachers elsewhere are having to wear scarves and coats all day.

Some schools have urged pupils to ‘learn to love being a bit chilly and fresh’ and ensure they are wearing ‘coats, gloves and base layers’ to stay warm. 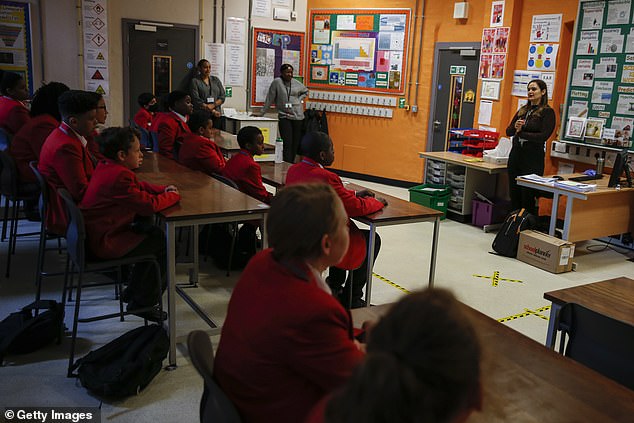 Schools have been advised to keep windows and doors open to aid ventilation in a bid to prevent the spread of the virus since returning in September. Pictured: A teacher explains social distancing measures to a group of year 7 students in a classroom in September

In Norfolk, mother Charlotte Brannan Milito said her son was ‘so cold he couldn’t talk’ after teachers at Wymondham High Academy said he could not wear his coat.

She told BBC Radio Norfolk earlier in the month: ‘My children asked if they could put their coats on and they were told that they couldn’t. The teacher said putting on a coat would be a distraction to the rest of the class.

‘I was shocked – my youngest said he was so cold he couldn’t even talk because his teeth were chattering.

‘I understand why the windows were open and I completely support and commend the school on how well they have put all the guidance into place and how everything is running – I don’t have any qualms with that at all.

‘It’s just that I really do feel if a child is uncomfortable and they feel cold, I don’t think putting on a coat is going to cause distraction.’

But Wymondham High headteacher Jonathan Rockey said: ‘The weather last week turned from summer to winter in a matter of a few days.

‘Teaching staff were given discretion as to whether or not pupils required a coat depending on the temperature of the classroom.

‘It’s not necessary for pupils to wear coats at the moment as our rooms are well heated but, as part of our risk assessment, our systems are reviewed fortnightly.’

Teachers are complaining of ‘miserable’ temperatures, numb fingers, and having to wear scarves and coats all day.

Other teachers have been ordering clothing and telling pupils to buy ‘good thermals’ ahead of the weather getting colder, reported the Times Educational Supplement.

The publication also told of a a physics teacher from Southampton who claimed that gloves, scarves and hats would now become ‘essential’ in classrooms.

Highlighting the issue was Stuart Lock, chief executive of Advantage Schools in Bedford, who tweeted last week: ‘School was cold today – and much worse for pupils and teachers.

‘Are people whacking their heating up and keeping windows open or what? Going to be hard in proper winter.’

Teacher Paige Richardson, who lives in Brighton, replied: ‘I was so cold, by period three I struggled to use the keyboard to do the register because my hands were so cold. I teach in the south of England. It’s September.’

An anonymous primary school headteacher in Surrey added: ‘Decided to close all outside doors during lesson times, open all internal doors and windows for ventilation.

‘If the children and staff are freezing then I doubt the lesson will be as productive as it should be.’