A new scheme to replace kitchen knives with blunt blades in the homes of domestic  violence victims to prevent them being attacked in their own home has been slammed.

Nottinghamshire Police are set to pilot the scheme where people who have been threatened or attacked with a blade will be offered the ‘no point’ knives.

The initiative has been slammed by critics who have called it a waste of taxpayer’s cash.

The public claim Nottinghamshire police, who received a £1.5million funding boost for the plan, would be better off dealing with offenders properly in the first place rather than rely on gimmicks. 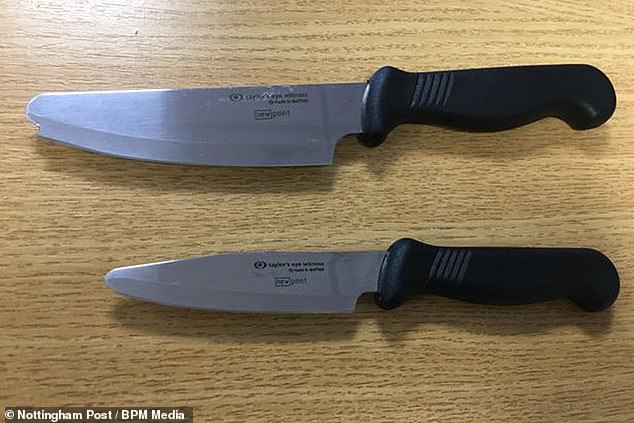 Nottinghamshire Police are set to implement a the scheme where victims of domestic violence can have their kitchen knives replaced with blunt blades to prevent them being attacked in their own home.

But news of the scheme has been met with widespread cynicism with some calling in effective as others claimed, ‘the police have lost the plot’.

Online plenty of Twitter users slammed the plan Rebecca Dundon posted: ‘Here’s a novel idea… why don’t we put the bad people in jail instead of making blunt knives. I cba.’

Karen Ingala Smith also tweeted: ‘If violent men cannot access sharp knives, they will find another item to inflict abuse or use their hands and feet.

Meanwhile locals have voiced their concerns about the program including Andy Carlin, who labelled it an ‘idiotic idea’ and ‘a clear waste of taxpayers money’.

‘Blunt knives are going to do nothing to tackle domestic violence as they can still use their fists and other household items to stab someone,’ he said.

Another woman, who was a victim of violence at the hands of her ex, said: ‘It would be better to just deal with them properly on the first incident of domestic violence.’ 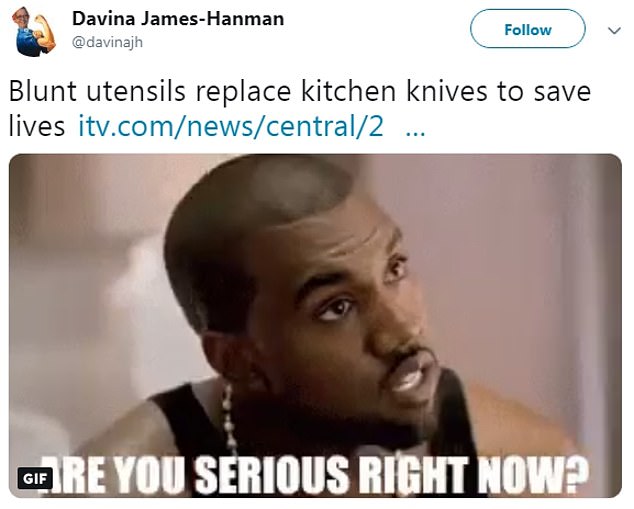 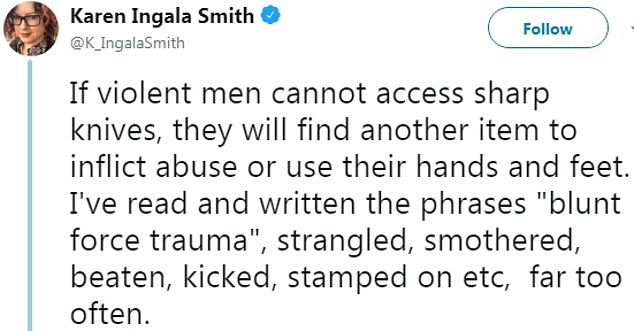 Between 2018 to 2019, out of the 900 reports of knife crime to Nottinghamshire police, 159 were related to domestic violence.

Superintendent Matt McFarlane, the new knife crime strategy manager for Nottinghamshire Police, said: ‘We do see a fair amount of knife related incidents in domestic abuse not just on the streets.

‘The knife is blunt at the end – but still functions as a knife – so you can’t stab someone.

He said the ‘no point’ knives would generally be handed out in a situation ‘where a knife had been used or the victim had been threatened on a previous occasion’. 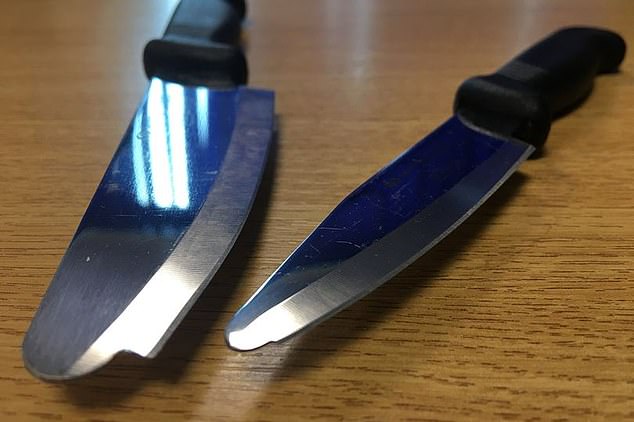 Between 2018 to 2019, out of the 900 reports of knife crime to Nottinghamshire police, 159 were related to domestic violence. Superintendent Matt McFarlane said: ‘This is a measure we need to take. We want to reduce that risk. It is a trial’

Victims taking part in the scheme would need to agree to have their knives, purchased by the force, replaced as it is not mandatory.

Superintendent McFarlane added: ‘We are trialling it to see if it makes a difference. Sometimes you have to trial things to see if they work. Anything that stops someone being seriously injured is a good idea.’

Fiona McCulloch, 38, of Chilwell, Nottinghamshire, a victim of domestic abuse at the hands of her ex-partner, Andrew Kontny, 36, welcomed the scheme.

The mother-of-two called the plan ‘100 per cent positive’, and added: ‘To have a blunt knife in my situation it would have taken that risk away.’

‘It is like you are taking away their options and the more you can take away the better. Sometimes, leaving is not an option,’ Ms McCulloch added.

Kontny pleaded guilty and was sentenced to five years six months for GBH with intent, 16 months consecutively for ABH and one month concurrently for damaging property.

He said: ‘Having safer implements in the home can reduce injuries and save lives. It is important that we get the message across that the chance of being stabbed on the streets is low and there is a bigger problem around domestic violence.

‘It is an excellent initiative. Some research shows that women are attacked around 19 times before they leave their home.’

On Facebook, Marceline Powell had plenty of questions about Nottinghamshire police’s scheme and how it will be run.

She wrote: ‘How is it monitored? How much does it cost to distribute? How do you identify who needs it? How does it prevent stabbing at all when there are so many potential weapons in a household?’

Nicholas Brookes wrote: ‘I reckon you could stab someone with a spoon if you tried hard enough ridiculous idea!’

Meanwhile Samantha Ward pointed out that a blunt knife would do nothing to reduce stabbings: ‘If a violent partner is in a rage enough they can turn anything into a weapon to hurt the person it’s intended for.’