The ecstatic US Navy sailor whose kiss with a woman in Times Square celebrating the end of World War II was immortalized in one of the most iconic photos of the 20th century has died aged 95.

George Mendonsa fell and suffered a seizure on Sunday at the assisted living facility in Middletown, Rhode Island, where he lived with his wife of 70 years, his daughter, Sharon Molleur, told The Providence Journal. He died two days before his 96th birthday.

Mendonsa was shown kissing Greta Zimmer Friedman, a dental assistant in a nurse’s uniform, on August 14, 1945. Known as V-J Day, it was the day Japan surrendered to the United States.

It wasn’t until decades later that Mendonsa and Friedman were identified as the couple locking lips what became one of the most widely-recognized images of the World War II era, taken by Life magazine photographer Alfred Eisenstaedt. 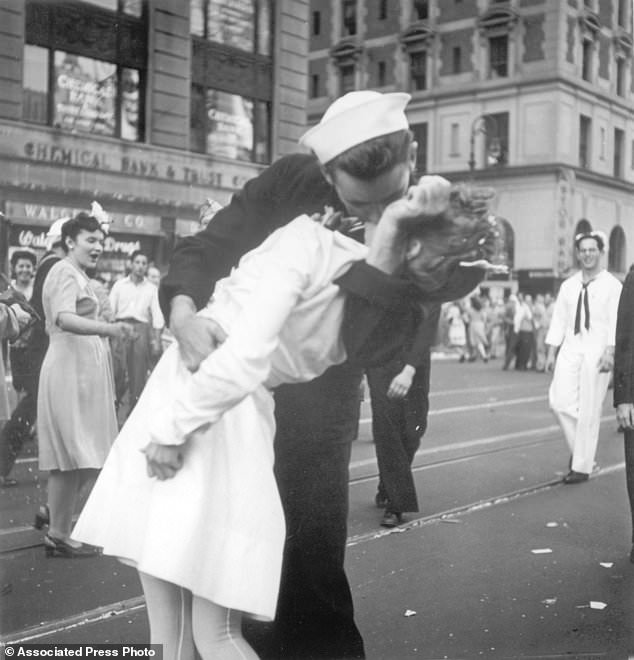 George Mendonsa, the ecstatic US Navy sailor shown kissing a woman in Times Square celebrating the end of World War II, passed away aged 95 on Sunday in Middletown, Rhode Island. The iconic photo of Mendonsa and Greta Zimmer Friedman, a dental assistant in a nurse’s uniform, was taken by Alfred Eisenstaedt on August 14, 1945. Known as V-J Day, it was the day Japan surrendered to the United States 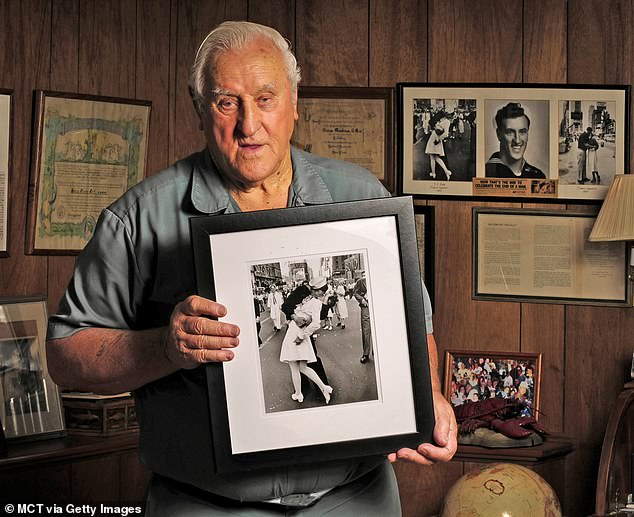 Mendonsa is seen holding the iconic photograph at his home in Middletown, Rhode Island, in 2012. He spent several decades insisting that he was the sailor in the picture, but it wasn’t until recently that his claim was verified by facial recognition technology and experts in photography and forensic anthropology

Mendonsa is survived by his wife Rita, son Ron Mendonsa and daughter Sharon Mouller, who said arrangements for her father’s funeral have not been made.

The sailor spent 74 years insisting that he was the man in the photograph, along with dozens of others who were sure it was them.

It wasn’t until recently that his claim was verified when facial recognition technology and experts in photography and forensic anthropology ruled out all the other sailors.

‘The evidence is so overwhelming,’ Lawrence Verria, coauthor of The Kissing Sailor, told the Providence Journal in the hours after Mendonsa’s passing.

‘There really is no doubt…. This man deserves the credit during his lifetime.’

Verria met with Mendonsa when he and George Galdorisi were researching The Kissing Sailor, published in 2012 by the Naval Institute Press.

The author, who is now head of the social studies department at North Kingstown High School, called Mendonsa a national treasure.

‘George Mendonsa just won me over,’ Verria said. ‘He really was bigger than life.’

Mendonsa, a fisherman by trade, served at the helm of The Sullivans during World War II. The Navy sailor’s Rhode Island home is filled with mementos from his time in the military

Verria said Mendonsa was a fisherman whose skills at maneuvering a boat made him a perfect fit for the Navy. During the war, Mendonsa successfully maneuvered his destroyer through Typhoon Cobra, which then flipped three other destroyers.

The sailor served at the helm of The Sullivans, a boat named for five brothers who died when the USS Juneau sank during World War II.

It was his time on that ship that inspired Mendonsa to kiss the woman in the nurses uniform on V-J Day, Verria said.

After the USS Bunker Hill was struck in a kamikaze attack in May of 1945, The Sullivans, steered by Mendonsa, was sent to rescue the survivors and transfer the wounded to the Bountiful, a nursing ship.

Mendonsa told Verria of how he watched from the helm as the nurses tended to the wounded sailors, repeating telling the author: ‘They were in a bad way.’

Three months later, Mendonsa was on leave and happened to be in Times Square when the end of the war was announced.

‘He sees the nurse, he can’t help himself,’ Verria told The Providence Journal. He said Mendonsa grabbed Friedman and kissed her because she represented the nurses he’s seen helping the wounded sailors on the USS Bunker Hill.

‘It’s what everybody was doing on August 14, 1945,’ Verria said. ‘Everybody was kissing and hugging. As soon as the kiss was over, they went their separate ways.’

Neither Mendonsa nor Friedman knew of the photograph until decades later.