SAGE says Covid cases will start to fall within weeks ‘because of vaccines, natural immunity and seasonality’ – despite rapid explosion in England’s outbreak

Covid cases in England will ‘plateau and then fall’ within weeks, according to No10’s top scientists.

The claim – unveiled in a tranche of documents published today – comes amid fears infections will continue to spiral over the coming weeks, with England’s progress to the final of Euro 2020 blamed on a ferocious surge in cases.

But SAGE’s viewpoint offers one of the clearest signs yet that ministers won’t budge on going ahead with Freedom Day on July 19.

Boris Johnson and senior colleagues in Government are still reviewing the data and advice given to them about the final unlocking. Scientists, including Professor Chris Whitty himself, have already rolled the pitch for the remaining laws to be dropped in two weeks’ time.

Office for National Statistics (ONS) data shows around 330,000 were infected with coronavirus on any given day last week 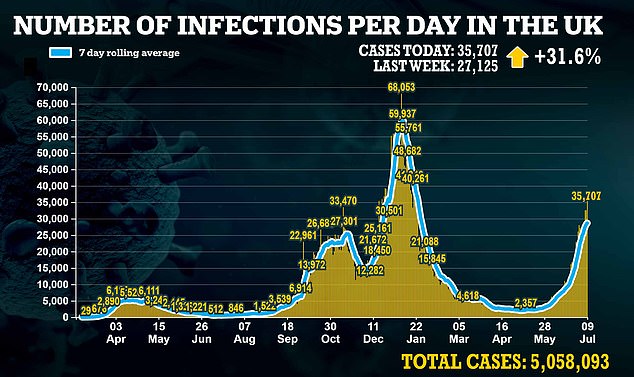 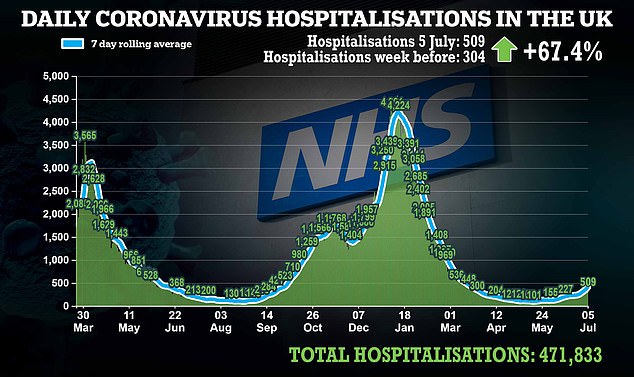 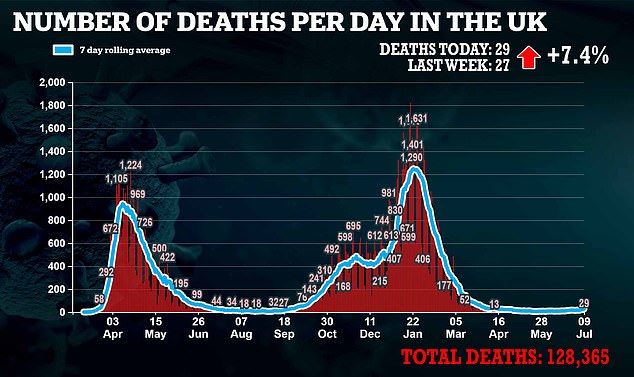 The latest UK daily figures show 35,707 tested positive for the virus – a seven month high – and Covid hospital admissions breached 500 for the first time since mid-March. In the last week, 176 people died with the virus within 28 days of a positive test

Documents released by SAGE, No10s scientific advisers, state individual restrictions ‘may not contribute much’ individually, but together add up to ‘a significant impact’.

So the pandemic may ‘grow considerably more quickly if all these mitigating factors are relaxed over a short period of time’, they said.

Under the Government’s Freedom Day plans, face masks will no longer be mandatory and work from home guidance will be lifted.

The documents also set out that people working at home are less likely to catch Covid.

So a mass return to office working would have a big knock on effect, the scientists said.

People working away from home have contact with around three times more people than those working from home, the experts said.

Those who were allowed to work from home are 54 to 76 per cent less likely to catch Covid, SAGE said.

Health chiefs are said to have dubbed England’s post-Freedom Day strategy ‘hybrid immunity’, a play on the controversial herd immunity tactic that was touted at the beginning of the pandemic.

It would see the older and vulnerable population – who will be fully vaccinated by July 19 – enjoy protection through the jab programme while the young get immunity from natural infection.

SAGE advisers said it was ‘very difficult’ to predict when cases will begin falling in the country.

Outbreaks will plateau at different times in different regions, they wrote in one of the documents submitted on June 23.

The full scientific paper read: ‘At some point in the future, the number of cases in England will plateau and then start to fall as a result of vaccination, natural immunity, seasonality, and behaviour change.

‘It’s very difficult to determine in advance the precise date at which this will occur.

‘It’s likely it will happen at different times in different parts of the country, depending on local levels of immunity and behaviours.’

Ministers have reportedly been privy to mathematical modelling from the advisory panel that suggests cases will peak in August.

Meanwhile, Government scientists today announced that England’s coronavirus R rate could now be the highest it has been since the second wave spiralled out of control in October.

SAGE estimates the reproduction rate – which measures how quickly the outbreak is growing – may be as high as 1.5 and is no lower than 1.2.

For comparison, No10’s top advisory panel thought the actual figure was somewhere between 1.1 and 1.3 in last week’s update.

Meanwhile, separate grisly data today revealed around one in 160 people had Covid in England on any given day last week.

Data from the Office for National Statistics suggested more than 330,000 people would test positive at any one time – up 60 per cent on the week before. Cases increased in all age groups, with one in 50 people aged 18 to 24 carrying the virus.

But the true picture on the third wave is mixed. Despite infections continuing to soar and hospital admissions and deaths ticking up, there are signs the outbreak may be slowing down.

And experts today said the outbreak in England — which makes up the majority of cases spotted in the UK — may begin to shrink following Euro 2020, with top researchers blaming the football tournament for driving a ferocious surge in infections.

Professor Paul Hunter, an infectious disease specialist at the University of East Anglia, believes the country is likely to see a slow down in cases once the tournament ends after England’s final against Italy on Sunday night — as was the case in Scotland after they were knocked out.

Despite promising signs north of the border, the same ONS data today showed 1 per cent of the country was still infected at any given point last week, meaning one in every 100 people were carrying the virus.