London: The woman who could one day replace Theresa May as Tory leader, Ruth Davidson has announced she is pregnant, with her girlfriend Jen, after conceiving using IVF.

She announced the news on Twitter with a photo of her, Jen and their dog, saying their family of three was about to become four.

Like the New Zealand Prime Minister Jacinda Arden, the Scottish Conservative leader said she had no intention of stepping down from her position but confessed to feeling "excited and daunted" "like all new parents-to-be" by the prospect of becoming a Mum in "the late (Scottish) Autumn."

"Mostly we are over-joyed at the prospect of starting a family together," she said in a statement.

"While this news may be unexpected for many people, let me reassure my constituents and voters across Scotland that there is no change to my political commitment or plans to lead the Scottish conservatives into the 2021 Holyrood elections," she said. 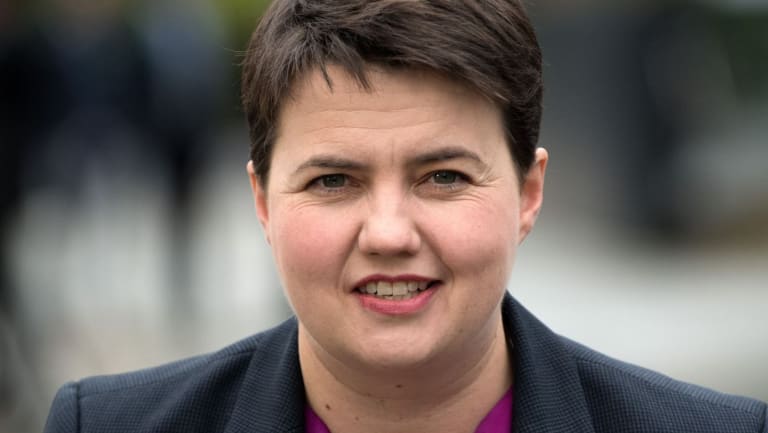 "I'm simply doing what thousands of working women do every year: having a child, taking some time off, and then returning to work soon after," she said.

"Many congratulations to Ruth Davidson and her partner Jen on their lovely news. The baby box is on its way!" The First Minister said, referring to her government's recent policy of giving new mums a box containing essentials, including: clothes, a digital thermometer, a bath towel and changing mat.

Davidson became leader of the Scottish Tories in 2011 and in 2016, doubled her party's number of seats in the Scottish parliament to 31. But to eject First Minister Nicola Sturgeon from the job, as she is hoping, Davidson would need to more than double the number of seats to win the majority required.

If she fails, she could move to join the British parliament in Westminster, with a view of replacing Theresa May as leader, potentially before the next British election due in 2022. She has recently teamed up with cabinet minister Michael Gove, a political kingmaker, to front a new think tank, Onward, aimed at wooing younger voters.

Davidson's profile in British politics has been on the rise, ever since she shot to prominence as a leading Tory campaigner for Remain during the 2016 EU referendum. Despite Leave winning that vote, she was widely perceived to have been a leading light for the losing side.

She was also the star of last year’s Tory party conference, when she gave a rousing speech demonstrating how to take on Labour Leader Jeremy Corbyn. Her performance was in stark contrast with Mrs May's which became a political disaster, when she was hampered by a bad cough, interrupted by a prankster and the letters behind the lecturn fell of the wall on live television.