“There have been wake-up calls. But in Estonia I don’t think we ever actually needed to be woken up.

“We were wide awake throughout,” says Sven Mikser.

To Mikser, Estonia’s foreign minister, none of this is news.

His country is on the frontline of what many are calling the new Cold War. It shares a long border with its eastern neighbour. Its population of 1.3 million is tiny in comparison – and many of those identify culturally and linguistically as Russian in this country that restored its independence just 27 years ago. 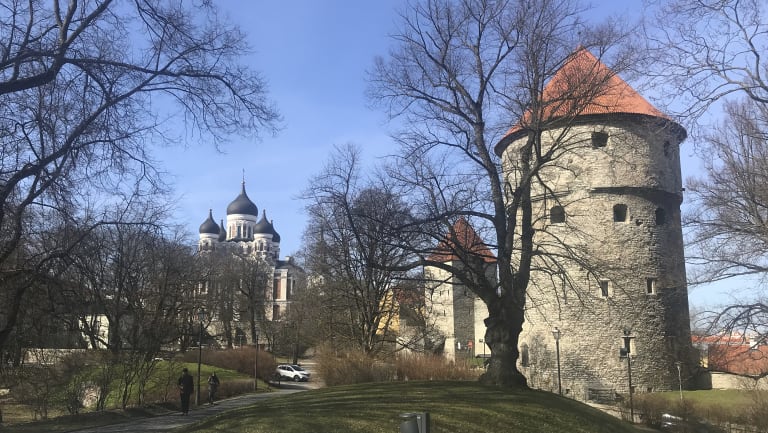 Nice – if a bit fresh – in northern spring, Tallinn, Estonia.

Exactly 11 years ago, on April 27, 2007, Estonia came under a sustained cyber attack that the government believes was condoned, encouraged, possibly even orchestrated by the Kremlin.

Former president Toomas Hendrik Ilves called it “the first case of cyber-war”, and says it changed not just the direction of his own country, but NATO itself.

Though its NATO membership offers a significant deterrence, Estonia is painfully aware that if Russia really wanted, it could steamroll into this country and out the other side in a day.

“We have seen Russia launch two military operations against its neighbours in a matter of 10 years: in 2008 against Georgia and more recently against Ukraine,” Mikser says. “It’s a pretty scary pattern if you think about it. In 21st century Europe you see a country using military means to achieve its political goals – with apparently very little hesitation.”

Mikser, 44, is a high-octane politician: half an hour late for our interview, he makes up for it by talking at a million miles an hour in near-faultless English. We sit in a metaphor: the ministry is housed in the old Communist Party headquarters, its Soviet history obvious in the marbled, echoing lobby, but up on the top floor it has been renovated like a corporate boardroom with a commanding view of ancient Tallinn. 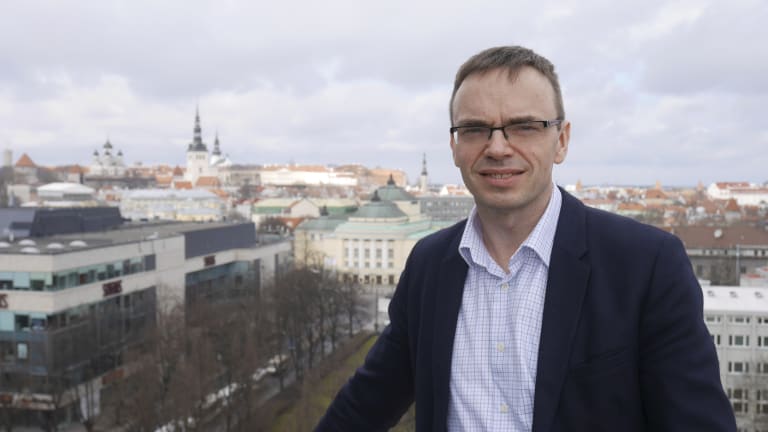 Estonian foreign minister Sven Mikser on the balcony of his office in Tallinn.

Mikser says Estonia was “remarkably successful” in dealing with the 2007 attacks. The country “learned lessons” and worked to build up safeguards.

The country has become a world-leading innovator in e-government: each citizen has a digital identity that can be used for everything from online voting to claiming tax refunds to buying movie tickets.

“But obviously there are vulnerabilities that come with a dependence on digital,” Mikser says.

They recently set up a so-called “data embassy” in Luxembourg: a digital vault for backups of its digital registers, so the country can survive technical failure – or an attack.

“You need to take precautions, you have to build up safeguards so you would be able to keep these critical services running even under severe pressure,” Mikser says.

“We probably should not expect all future wars to be fought in the internet but there will be a cyber dimension to any conventional conflict, that’s pretty sure.”

But while a 2007-style attack would be less likely to succeed these days, the threat has evolved.

The buzzword is “hybrid threats”. As seen in Ukraine and elsewhere, an aggressor can fight on an information front: an attack to undermine a country’s will to resist.

Mikser says Estonia has “taken it very seriously for those more than 25 years that we have enjoyed our restored independence”.

And now the world is waking up to it. He points to the propaganda that surrounded, followed and attempted to justify or distract from aggression against Ukraine, the annexation of Crimea, the downing of MH17, the Sergei Skripal poisoning and the Syrian chemical weapons incidents.

“This is something that needs to be taken very seriously… [propaganda operations] have been more recently used extensively in order to either influence the outcomes of democratic elections in [Western] societies and countries, or just to undermine people’s confidence in those democratic processes.

“We [in Estonia] have seen those attempts to interfere in our own democratic process throughout this period of restored independence and we have developed pretty good defences, I would say.”

“When you do not expect anything like this to happen you end up with a pretty disastrous outcome… the strategy that we’ve seen utilised particularly by Russia but not only by Russia is to create confusion… not just to contest the factual account, the intention is to put out many flares, to put out an infinite number of alternative truths.”

He points to MH17, when Russia spammed social media and Russia-friendly media with alternative explanations for the crash.

He points to the poisoning of Sergei Skripal: “you just say ‘well we never had this Novichok programme, or perhaps we did and we ended it and got rid of all the poison, or perhaps we didn’t but then there might be other countries that have a stockpile of this agent’.

“Every day you come up with a new version and you create a lot of confusion… it happens so much it’s difficult to believe that it’s accidental.”

In the face of this, Mikser says unity is vital.

“When you talk to a leader like [Putin], and obviously we need to talk with Russia, then you need to talk from a position of strength and unity and determination. Because any sign of hesitation is interpreted in the Kremlin as weakness to be exploited.”

NATO countries have done more military positioning on their eastern flanks, and run exercises close to Russia’s border. The Kremlin has portrayed it as provocation. Mikser says it is “pretty modest and definitely not escalatory… [it's] the way to preserve peace”.

And Australia has a role, too, despite its being on the other side of the world, Mikser says.

“When we see those violations of international law then it’s also very important to show that the perpetrator of such violations cannot get away with impunity.

“Absolutely it’s important to have a very strong consensus and a unity of purpose and action by the whole community of democratic nations. Australia, not being a North Atlantic nation by any account, it’s a very close partner … and I think it’s extremely important that it’s not just a regional response [to Russia] but it’s a unified response of the whole democratic world.”