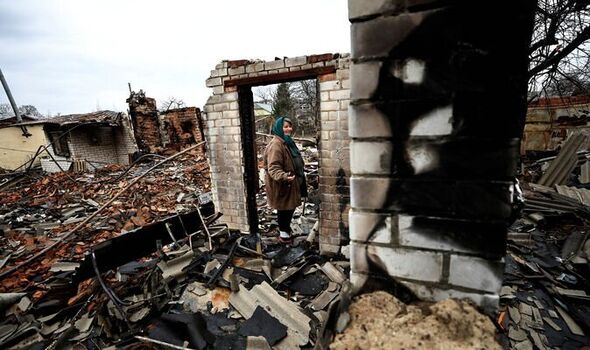 Ivan Polguy, 61, said 12 died and survivors who tried to bury them outside were shot in the village of Yahidne, 12 miles from the northern city Chernihiv. Others told of young men rounded up and killed by troops – who also beat up men old enough to be their grandfathers. Ivan, his wife Katarina and relatives were locked in the school cellar as Russians killed and maimed others outside.

He said: “Twelve died in that basement from lack of air or nervousness.

“As soon as the Russians saw someone come out, they started shooting, killing more people and wounding others.

“The bodies were brought into the basement and the wounded were treated by nurses who were with us.” Residents say the village has lost two-thirds of its 300-strong population.

Ivan said: “These so-called soldiers were worse than Nazis in my opinion. It was truly terrifying. What was also shocking was their lack of humanity – they were just full of hatred and bitterness.”

Mykhail Vovk and his wife Valentina, both 65, said an exhausted Russian soldier insisted on sleeping on their bed with them. Valentina said: “We survived but young men were killed in the fields, given shots in the head.

“They were in a vehicle and their hands were tied.”

She said the victims’ faces were mutilated “so they cannot be recognised”.

Natalia Titova, 62, was in the basement of her Chernihiv house when it was destroyed by Russian shelling.

She said: “When the rocket hit our house, we ran into the street. It was very scary.”