Pharmaceutical giant Johnson & Johnson has lost a legal bid to overturn a landmark Federal Court decision that paves the way for it to pay millions of dollars in compensation to Australian women affected by its defective pelvic mesh implants.

The company had lodged an appeal against a 2019 decision of Justice Anna Katzmann, who found Johnson & Johnson companies engaged in conduct that was negligent and “misleading or deceptive or likely to mislead or deceive” patients and doctors about the safety and efficacy of nine synthetic implants used to treat female stress urinary incontinence and pelvic organ prolapse. 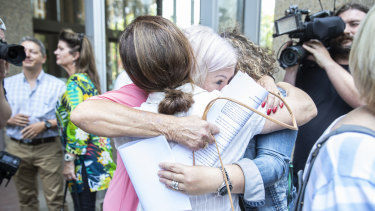 Women hug outside court after the findings in the pelvic mesh judgment were delivered in November 2019.Credit:Louie Douvis

Five of the nine products are no longer on the market in Australia. The court heard the implants had caused a range of serious complications including chronic pain, infections and damage to surrounding organs.

Justice Katzmann found the devices were sold with a safety defect and were unfit for the purpose for which they were acquired.

In March last year she ordered Johnson & Johnson to pay $2.6 million in damages to three women at the centre of the class action, Kathryn Gill, Diane Dawson, and Ann Sanders. More than 1000 other women who signed up to the class action are expected to be compensated in the future.

In a decision on Friday, the Full Court of the Federal Court – Justices Jayne Jagot, Bernard Murphy and Michael Lee – dismissed the appeal. However, the judges found there was some lack of precision about the identity of all the group members who are party to the class action.

The court said this issue could be resolved by the parties, who are required to submit a proposed order or competing orders to the court that deals with this outstanding question.

The Full Federal Court said more than 90,000 of the implants had been supplied in Australia.

The terms of the court-ordered warning include that the products are “designed to and will” elicit an acute inflammatory reaction followed by a chronic inflammatory response for as long as the implant remains in the patient’s body, and in some cases that will produce “adverse effects”.

The complications are “not rare” and removing the implant may be difficult and may not alleviate the problem, the warning says. Removal may also cause further scarring and tissue damage.

Catch all the day’s breaking news

At the end of each day, we’ll send you the most important breaking news headlines, evening entertainment ideas and a long read to enjoy.  Sign up here.