Mr Sunak will run the gauntlet of the Commons in the wake of the dramatic announcement last night, with the Cabinet minister admitting the furore had become a ‘distraction’.

The departure followed another frantic day of allegations about Sir Gavin’s behaviour – including that he told a senior civil servant to ‘slit your throat’.

Some MPs voiced delight at his ousting, with one dismissing him as a ‘weedy little bloke who likes to think of himself as a hard man’.

However, while Downing Street will likely breathe a sigh of relief that Sir Gavin has fallen on his sword, questions have been raised about Mr Sunak’s judgment in appointing his ally when he took over at No10 just a fortnight ago. The premier is said to have been aware of the dispute between Sir Gavin and former chief whip Wendy Morton over expletive-laden texts about invites to the Queen’s funeral.

In a round of interviews this morning, Education Secretary Gillian Keegan insisted Mr Sunak had the ‘highest degree of integrity’ and there had been ‘quick’ action.

Sir Gavin said in his resignation letter that he was determined to clear his name of wrongdoing. Responding, Mr Sunak wrote that he was accepting ‘with great sadness’. ‘I would like to thank you for your personal support and loyalty,’ he added.

Mr Williamson is entitled to nearly £17,000 in severance for his short spell in government – but last night he confirmed he would turn it down.

He tweeted: ‘To dispel any speculation, I want to make it clear that I will not be taking any severance. This is taxpayers’ money and it should go instead toward the Government’s priorities like reducing the NHS’s waiting lists’.

It is the third time Sir Gavin has been forced to exit the Cabinet, after being sacked as Defence Secretary by Theresa May and Education Secretary by Boris Johnson. 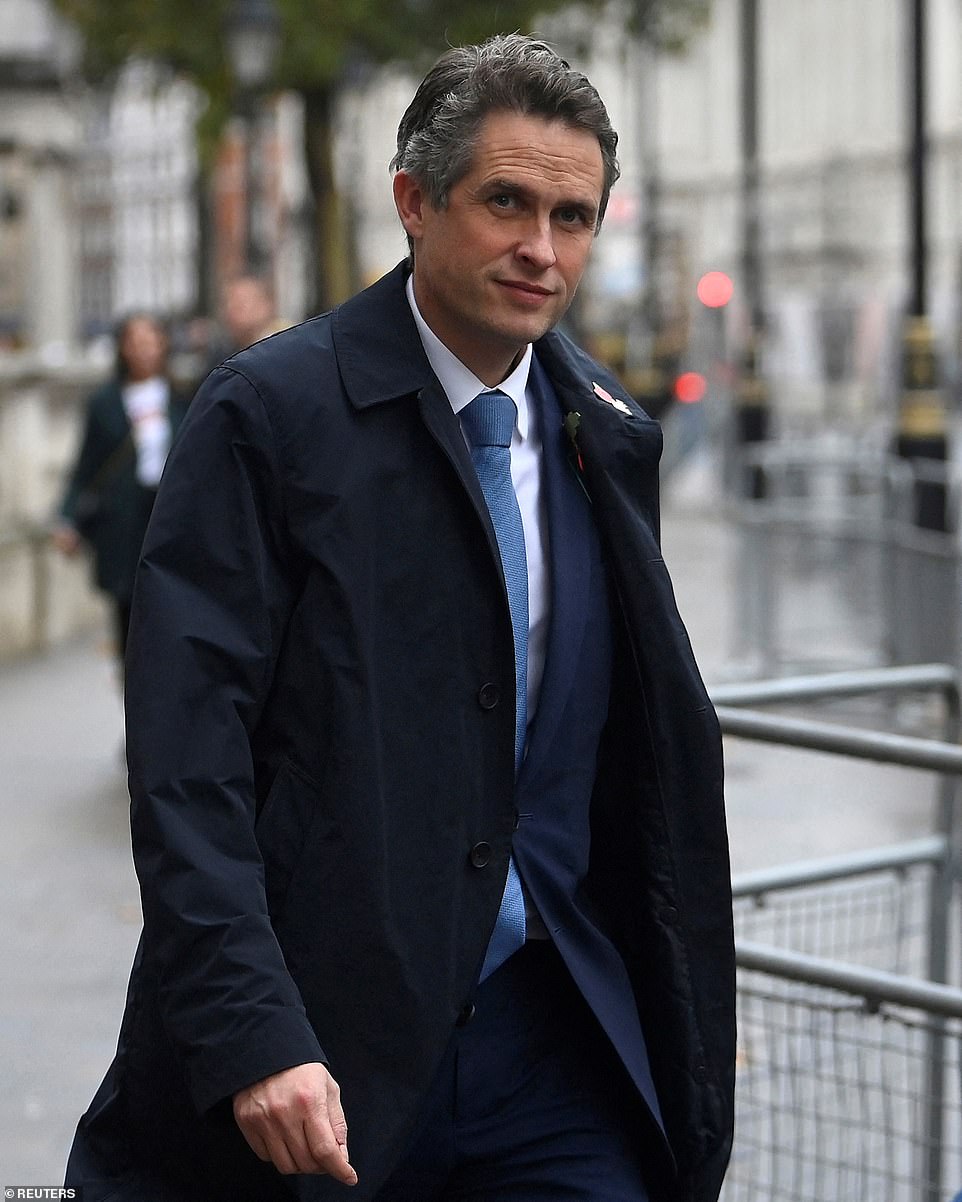 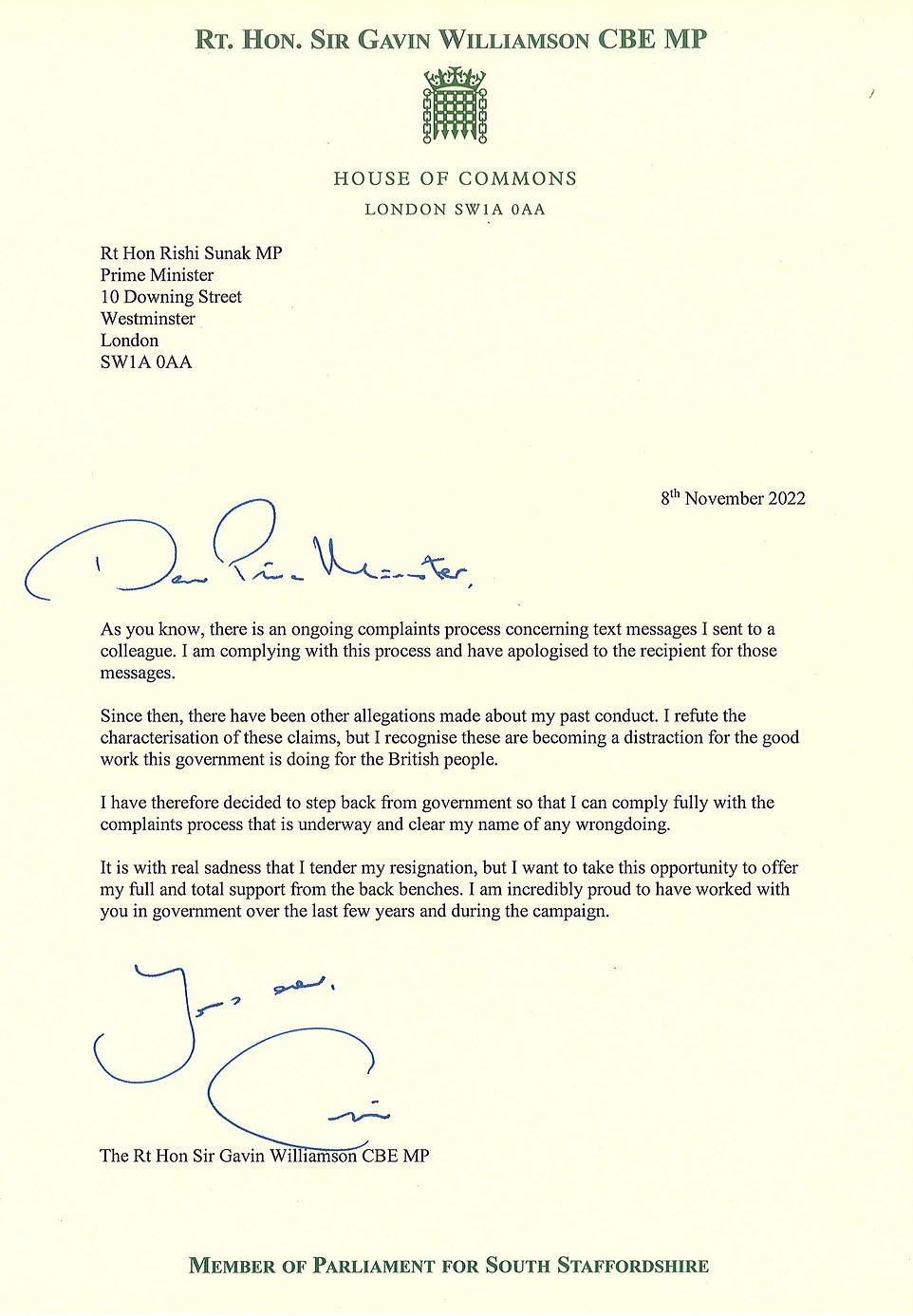 Sir Gavin’s letter of resignation sent to Mr Sunak , saying he recognised the allegations were becoming a ‘distraction’ 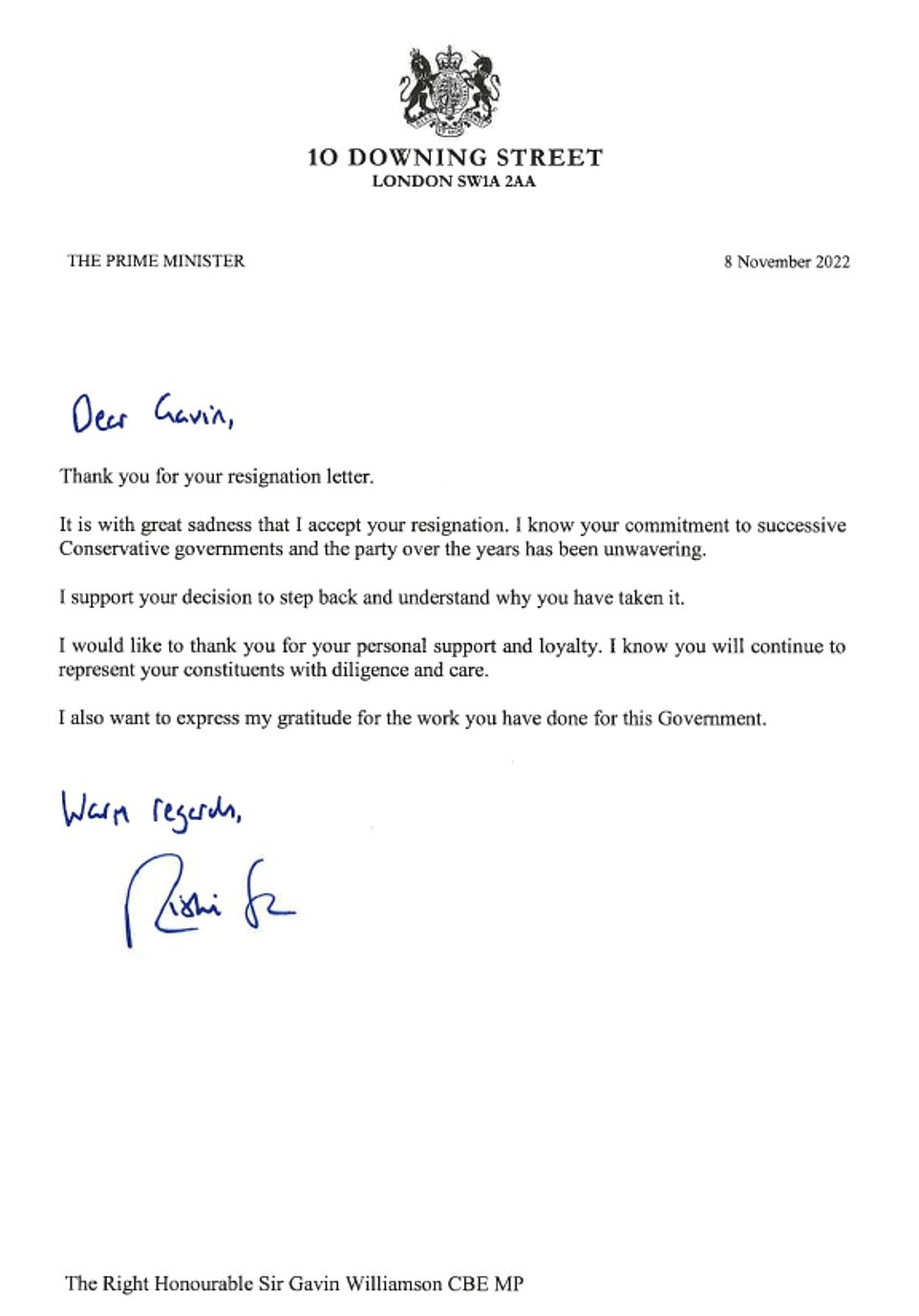 Responding, Mr Sunak wrote that he was accepting ‘with great sadness’. ‘I would like to thank you for your personal support and loyalty,’ he added

Mr Williamson was due £16,876 in severance pay despite being back in Government for just two weeks – but last night he confirmed he would turn it down.

Gavin Williamson’s political career has been filled with mishap and controversy.

Born and raised in Scarborough, he was managing director of a fireplace firm before becoming an MP. His reputation as a ‘master of the dark arts’ was cemented when chief whip in 2016 and 2017.

He revelled in his tough reputation, telling delegates at the 2017 Conservative Party conference: ‘We take a carrot and stick approach. Personally I don’t much like the stick, but it is amazing what can be achieved with a sharpened carrot.’

He kept a red-legged Mexican tarantula named Cronus in a glass box on his desk, which is said to have provided added menace when dealing with errant MPs.

He said the spider was ‘a perfect example of an incredibly clean, ruthless killer’.

Sir Gavin went on to raise eyebrows with his language while he served as defence secretary from 2017 to 2019. At the height of the furore over the Salisbury novichok attack he told Russia to ‘go away and shut up’.

Theresa May sacked him as defence secretary in May 2019 following an inquiry into a leak from a National Security Council meeting about Chinese involvement in the development of 5G networks.

Boris Johnson brought him back as education secretary but was then forced to resign again after the fiasco around grading of GCSE and A-level exams.

Sir Gavin also received criticism over free school meals and over the recovery plan to help pupils catch up after Covid.

He came under fire for telling a newspaper he had held a Zoom meeting with Rashford, but he had in fact met rugby player Maro Itoje.

He was sent to the backbenches in September 2021 but returned two weeks ago as minister without portfolio under Rishi Sunak.

Mr Sunak pledged a new era of ‘integrity’ in government when he took over from Liz Truss, but has immediately been embroiled in rows over reappointing Suella Braverman as Home Secretary and then drafting in Sir Gavin.

‘I think Rishi has the highest degree of integrity and judgment,’ the Education Secretary told Times Radio.

‘We saw it all over the summer, he was prepared to tell the hard truths. That’s real leadership.’

She added: ‘I mean, the reality is you appoint people and, you know, the only thing you can do if things don’t work out or things go wrong or things come to light afterwards is act quickly.

‘I would expect after today that it won’t be discussed any further.’

Opposition parties seized on the news, with deputy Labour leader Angel Rayner saying: ‘This is a damning reflection of a weak Prime Minister. Rishi Sunak appointed Gavin Williamson with full knowledge of serious allegations about his conduct and repeatedly expressed confidence in him.’

In his resignation letter, Sir Gavin wrote: ‘As you know, there is an ongoing complaints process concerning text messages I sent to a colleague. I am complying with this process and have apologised to the recipient for those messages.

‘Since then, there have been other allegations made about my past conduct. I refute the characterisation of these claims, but I recognise these are becoming a distraction for the good work this government is doing for the British people.

‘I have therefore decided to step back from government so that I can comply fully with the complaints process that is underway and clear my name of any wrongdoing.

‘It is with real sadness that I tender my resignation, but I want to take this opportunity to offer my full and total support from the back benches. I am incredibly proud to have worked with you in government over the last few years and during the campaign.’

Downing Street was carrying out a fact-finding exercise into the claims about Sir Gavin’s conduct towards the defence official, which could have resulted in a formal propriety probe. Meanwhile the Tory party and Parliament’s bullying watchdog are looking into allegations made by Ms Morton.

Before lunchtime yesterday the PM’s spokesman was still voicing ‘confidence’ in Sir Gavin and stressing his contribution to government. But by 4pm No10 was making clear that Rishi Sunak might not wait for the outcome of investigations to act, and he then resigned just after 8pm.

One damaging factor was his former deputy Anne Milton alleging he used intimidatory and threatening tactics while he was chief whip.

Ms Milton accused Sir Gavin of seeking to use an MP’s financial difficulties as leverage against them and sending an expletive-laden email about a female civil servant.

Ms Milton, who was deputy chief whip from May 2015 to June 2017, described his behaviour as ‘unethical and immoral’, claiming: ‘I think he feels that he’s Francis Urquhart from House Of Cards.’

Ms Milton, who was stripped of the Tory whip during the Brexit rows in 2019 and subsequently lost her seat, told Channel 4 News: ‘

‘I got the impression that he loved salacious gossip and would use it as leverage against MPs if the need arose.’

Asked if any particular incidents stood out from her time working under Sir Gavin, she added: ‘There were a few – the salacious gossip, which I’ve talked about, people’s sexual preferences, that sort of thing.

‘He loved all that. He would come into the office and say: ‘Guess who enjoys some form of sex or another’.

‘I found it very distasteful apart from anything. He also, on one occasion, we had an MP who’d got a few financial problems, some financial help was given.

‘It wasn’t a great amount, but I do remember him asking me to give the MP in question the cheque.

‘And he waved it under my nose and said: ‘Make sure when you give him this cheque he knows that I now own him’.

Ms Milton also recalled an email sent by Sir Gavin in 2016 in response to a female civil servant’s inquiry about why a minister had to change travel plans to attend a vote.

‘Always tell them to f*** off and if they have the bollocks to come and see me. F****** jumped up civil servants,’ she claimed he sent to her in reply.

She questioned Mr Sunak’s decision to give Sir Gavin a ministerial job, saying: ‘I think (at) best it was probably a bit naive. I don’t know that there are many people that would hang out the bunting to see Gavin Williamson back in government.’

Ms Milton was Conservative MP for Guildford between 2005 and 2019 but lost the Tory whip towards the end of her time in Parliament during the bitter Brexit battles in the House of Commons.

She subsequently stood as an independent candidate at the 2019 general election, but failed to hold onto her Surrey seat.

The claims by Ms Milton followed allegations that Sir Gavin clashed with a civil servant while he was defence secretary.

Sir Gavin denied the official’s allegation of a campaign of bullying but did not deny making the remarks, including telling the civil servant to ‘jump out of the window’.

The Guardian, which first reported the allegations, said a complaint had now gone to the ICGS.

In a statement, the complainant said they had an ‘incredibly difficult period’ working for Sir Gavin at the MoD and that the alleged bullying had had ‘an extreme impact’ on their mental health.

Sir Gavin has also been hit by a row over the expletive-laden text messages he sent to fellow MP Ms Morton after he was excluded from the Queen’s funeral.

In a statement following the Guardian report, Sir Gavin said: ‘I strongly reject this allegation and have enjoyed good working relationships with the many brilliant officials I have worked with across Government.’

It is understood that former chief whip Ms Morton has referred her complaint to Parliament’s bullying watchdog, while an internal Tory party inquiry is ongoing.

Having given strong backing to Sir Gavin at lunchtime, by yesterday afternoon Mr Sunak’s spokesman was indicating he would not feel the need to wait until the resolution of existing investigations to act if the circumstances demanded it.

‘Obviously he would act if and when he felt it was appropriate to do so,’ the spokesman said. 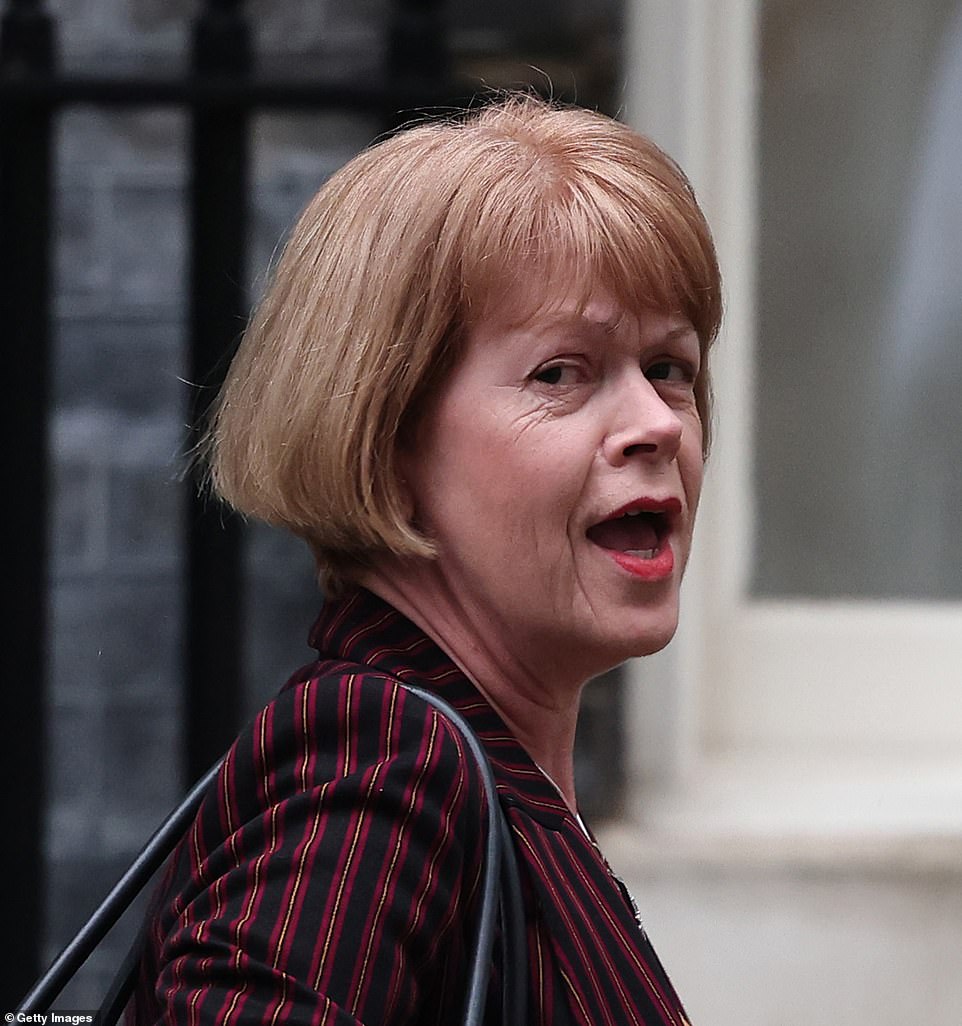 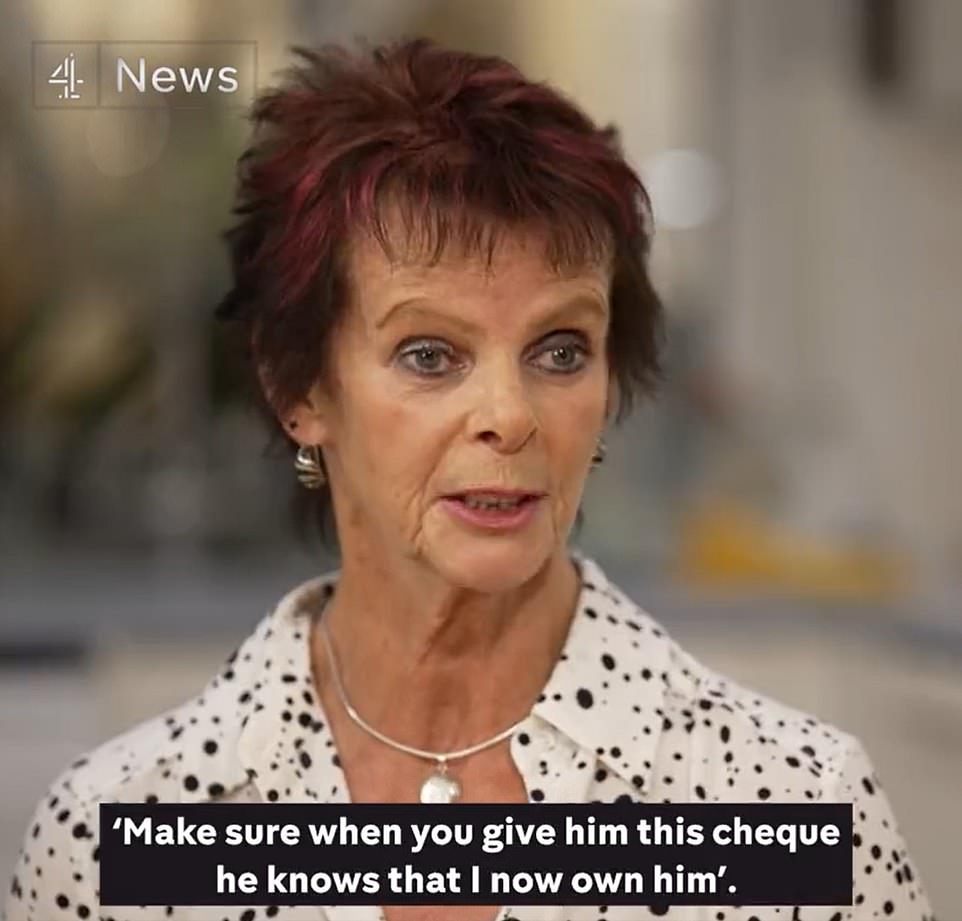 Ex-Conservative MP Anne Milton, who worked alongside Sir Gavin for almost a year in the Tory whips’ office between 2016 and 2017, claimed the 46-year-old ‘loved salacious gossip’ including about people’s ‘sexual preferences’

Ironically Sir Gavin’s ministerial responsibilities were only announced yesterday afternoon, having been a mystery for the past fortnight.

They included the Geospatial Commission, the Government Communications Service and the ‘Great Campaign’ to promote the UK.

In a series of texts peppered with swear words, Sir Gavin accused Ms Morton of seeking to ‘punish’ MPs out of favour with then-premier Liz Truss by excluding them from the Queen’s funeral, warning: ‘There is a price for everything.’

Sir Gavin, who was knighted after being nominated for the honour by Mr Johnson earlier this year, is a divisive figure at Westminster, where he is viewed with suspicion by many Tory MPs because of his reputation as an inveterate plotter.

He was sacked first by former PM Theresa May as defence secretary in 2019 for allegedly leaking details of a National Security Council meeting, and then by Mr Johnson as education secretary over the Covid-19 exams debacle.

However, he was regarded as a key figure in Mr Sunak’s campaign over the summer to become party leader.