St Kilda institution the Dog’s Bar has not survived 2020 after mediation between its proprietor and landlord failed to keep it open.

The Acland Street bar posted a message on its Facebook page on Tuesday, that has since been deleted, confirming the news. 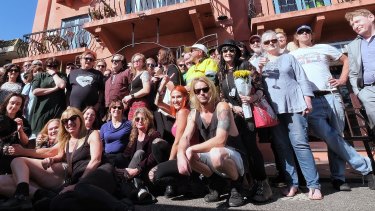 Regulars and musicians gather outside the Dog’s Bar in St Kilda on Wednesday afternoon after news of its closure. Credit:Luis Ascui

“Had our mediation today with the landlord via the Small Business Commission,” it said. “Guess we knew it would go nowhere. RIP Dog’s Bar.”

Proprietor Gavan Breen, who founded the St Kilda Blues Festival, did not answer The Age’s calls on Wednesday.

The building’s owner Silvio Salom, who bought it in 2013 for more than $6 million, also did not respond to requests for comment.

The Dog’s Bar was opened in 1989 by the late restaurateur Donlevy Fitzpatrick, who is credited with creating St Kilda’s bar culture, including overturning Victorian licensing laws that prevented patrons from ordering drinks without food.

The bar has been an important fixture in Melbourne's music scene and was one of the first venues to offer live music when COVID-19 restrictions eased last month. 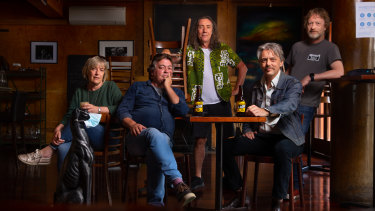 Hundreds of St Kilda residents and live music lovers shared their disappointment at the news in Facebook groups on Wednesday.

Musician Jack Howard, who played at the Dog's Bar two weeks ago, said it was "massive loss" to St Kilda and Melbourne's music scene.

"I've toured the world with Midnight Oil and Hunters and Collectors and it was one of the best gigs I've done," he said.

"I love [owners] Gavan and Sonya and I love going to the Dog's Bar.

"They've been incredibly supportive of me … and you would find that story repeated by so many other musicians who play there regularly."

St Kilda resident and former Port Phillip deputy mayor Serge Thomann said the Dog’s Bar had long provided a drinking hole for St Kilda locals, unlike others in the suburb that catered to backpackers or young people.

“[Fitzpatrick] created an institution. Everybody knows how significant the Dog’s Bar is in St Kilda culture,” he said.

“You go there for cheap meals, but also to listen to a band or have a beer and meet your friends, or even just a coffee; you go there for the atmosphere.

“It’s a very easy place where everybody talks to each other even if they don't know each other.”

Mr Breen took over the bar after former boss David Carruthers was kicked out in 2014.

Mr Thomann said Mr Breen had done a great job re-establishing the bar’s cachet and he hoped it could be revived again.

“The owners are locals as well and I’m sure that they will want to make sure that the Dog’s Bar remains and keeps thriving, potentially with new operators,” he said.

Punters, locals and musicians gathered out the front of the Dog’s Bar on Wednesday afternoon in support of the venue and its proprietors. 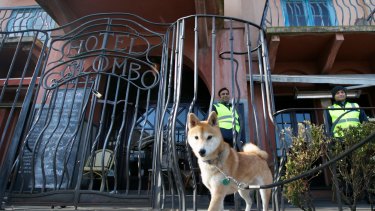 St Kilda’s Dog’s Bar after its former owner was locked out in 2014.Credit:Jason South

Television producer Peter Bain-Hogg said he was devastated at the news.

“[The Breens] built a community of regulars,” he said.

“There aren't too many places in Melbourne … that will have music, free seven nights a week – pre-COVID, of course – and really diverse music.

“They will be sorely missed.”

Dog’s Bar regular Michelle Nicol described it like a village square for the community.

“It’s where we find out how one another is,” she said.

“It's that really socially inclusive place that makes it a neighbourhood. It's loss means that we lose all of that.”