President Donald Trump discussed Jamal Khashoggi with Turkey’s president hours after the nation passed on what it says is an audio tape of the journalist’s murder to the United States.

The men were pictured at a dinner in Paris seated next to one another in photos released by the Turkish government.

‘I can confirm they say next to one another and they discussed the ongoing tragic situation with Khashoggi,’ White House Press Secretary Sarah Sanders told DailyMail.com . 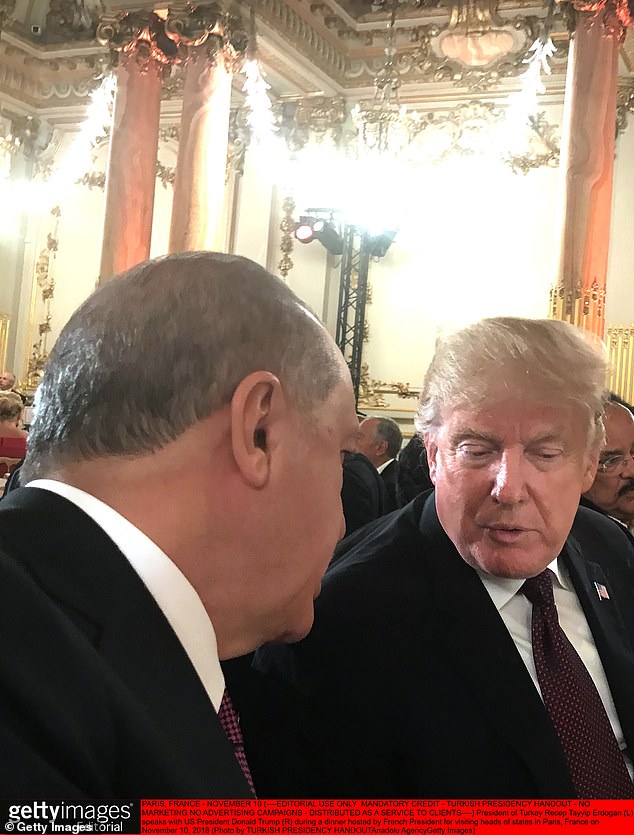 The dinner for visiting leaders at D’Orsay was not open to the media. Reporters traveling in the motorcade with President Trump never laid eyes on him or first lady Melania Trump entering or leaving.

Erdogan shared photos of himself yakking with the American president from inside the dinner in a press release that it distributed before the gathering had even ended.

Trump and Erdogan were seated next to each other at the dinner’s head table across from France’s Macron and Germany’s Angela Merkel. A barely visible Melania Trump can be seen in two of the photos talking to a guest at the table’s far end.

The White House did not immediately respond to a request for comment on the president’s conversation with the Turkish leader, which likely touched on the subject of Saudi Arabia.

Hours prior, as he was departing Ankara for Paris, Erdogan acknowledged the existence of a rumored audio tape that allegedly documents the final minutes of have journalist Jamal Khashoggi’s life. He said he had provided it to the United States, among other nations.

‘We gave it to Saudi Arabia,’ Erdogan said of the tape that unnamed Turkish officials told media about but not released. ‘We gave it to America. To the Germans, French, English, we gave it to all of them.’

The White House has not released a statement about the tape.

A German intelligence officer told the Washington Post, where Khashoggi was a columnist until his murder, ‘The recording was very convincing.’