US President Joe Biden has described renewing peoples’ faith in democracy as the “defining challenge of our time” while addressing over 100 world leaders at the beginning of his two-day democracy summit.

Alluding both to the rise of China and his predecessor Donald Trump, Biden said democracy was under threat from dictators who seek to “export and expand their influence around the world” and “voices that seek to fan the flames of societal division and political polarisation”.

Most worrying, he said, was the sense that people around the feel democratic governments are failing to deliver for their needs. 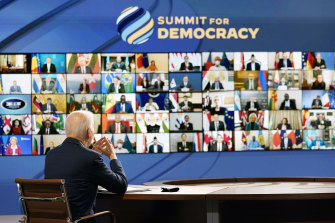 US President Joe Biden speaks at the opening of the Democracy Summit.Credit:AP

“Will we allow the backward slide of rights and democracy to continue unchecked?” Biden asked his fellow leaders at the virtual summit, who included Prime Minister Scott Morrison.

Describing the contest between democracy and autocracy as the defining struggle of the age, Biden said: “We stand at an inflection point in our history. The choices we make in my view in this moment are going to fundamentally determine the direction our world is going to take in the coming decades.”

Biden announced that his administration would spend US$424 million ($593 million) over the coming year to promote democracy by supporting media freedom, fighting corruption and defending free and fair elections. 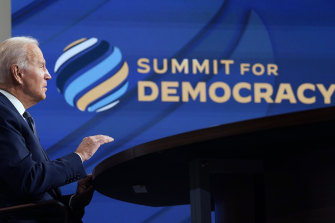 US President Joe Biden speaks during the two-day virtual summit.Credit:AP

He said his administration would provide funding to support a new defamation fund to help investigative journalists and their media outlets defend their work against lawsuits.

“We have to renew it with each generation. And this is an urgent matter on all our parts, in my view. Because the data we’re seeing is largely pointing in the wrong direction.”

In its 2021 report, democratic monitoring group Freedom House found that less than 20 per cent of the world’s population lives in countries it classifies as “free” – the smallest proportion since 1995. Meanwhile, the proportion of countries listed as “not free” is at the highest it has been in 15 years.

The Swedish-based International Institute for Democracy and Electoral Assistance named the United States a “backsliding democracy” for the first time following the January 6 Capitol riot.

Biden said that Americans know “as well as anyone that renewing our democracy and strengthening our democratic institutions requires constant effort”.

“Democracies are not all the same,” Biden said.

“We don’t agree on everything, all of us in this meeting today. But the choices we make together are going to define, in my view, the course of our shared future for generations to come.”

Speaking later at the summit Vice President Kamala Harris said: “Here in the United States, we know that our democracy is not immune from threats.

“January 6 looms large in our collective conscience, and the anti-voter laws that many states have passed are part of an intentional effort to exclude Americans from participating in our democracy.”

The White House attracted some controversy for its invitation list to the summit, which included several countries regarded as highly repressive by international human rights organisations.

Pakistan, Iraq, Angola and the Democratic Republic of Congo were among invited to the summit despite being classified as “not free” by Freedom House according to an analysis of civil and political rights in those nations.

Meanwhile, countries with significantly higher democracy ratings from Freedom House – including Hungary, Singapore, Bolivia and Sri Lanka – did not receive an invitation.