No red wave: Top Republicans admit disappointing initial midterm results as party looks set to take control of the House but with a much slimmer majority than they hoped and Senate hangs in the balance after Democrats take Pennsylvania

Top Republicans have admitted their predicted ‘red wave’ has not materialised after a disappointing night in the midterm elections.

Pollsters had forecast a heavy blow for Joe Biden at the midpoint of his four-year term, believing Republicans would make huge gains in the House and tip the balance in the Senate to seize control of Congress.

But initial results have thrown up a number of surprising Democrat wins, with many GOP candidates backed by Donald Trump faltering at the polls.

The House, the lower chamber of Congress which has been under narrow Democrat control, is likely to still turn Red but only by a razor thin margin.

The Senate, the higher chamber where only a third of the seats were up for grabs, is hanging in the balance after the Democrats won a number of crucial swing states.

Although many results have not been declared, the early signs suggest a huge boost for Biden who faced becoming a lame duck president for the remainder of his administration, and a damaging blow to Trump, who is expected to announce his White House bid next week.

And Republican Senator Ted Cruz of Texas said: ‘It hasn’t been as big of a wave as I’d hoped it would be. We’ve had some close races go the other way so far.’

One of the biggest Democrat scalps of the night was in Pennsylvania, where Lt. Gov. John Fetterman, who suffered a stroke just months ago, seized a Republican-held seat, beating the favoured TV star Dr Oz who used to star on the Oprah Winfrey Show.

The midterm elections determine the future of Biden’s agenda and serve as a referendum on his administration as the nation reels from record-high inflation and concerns over the direction of the country.

Republican control of the house would likely trigger a round of investigations into Mr Biden and his family, while a senate takeover would hinder his ability to make judicial appointments.

The party in power almost always suffers losses in the President’s first midterm elections, but Democrats had been hoping that anger from the US supreme court’s decision to gut abortion rights might energise their voters.

Your browser does not support iframes. 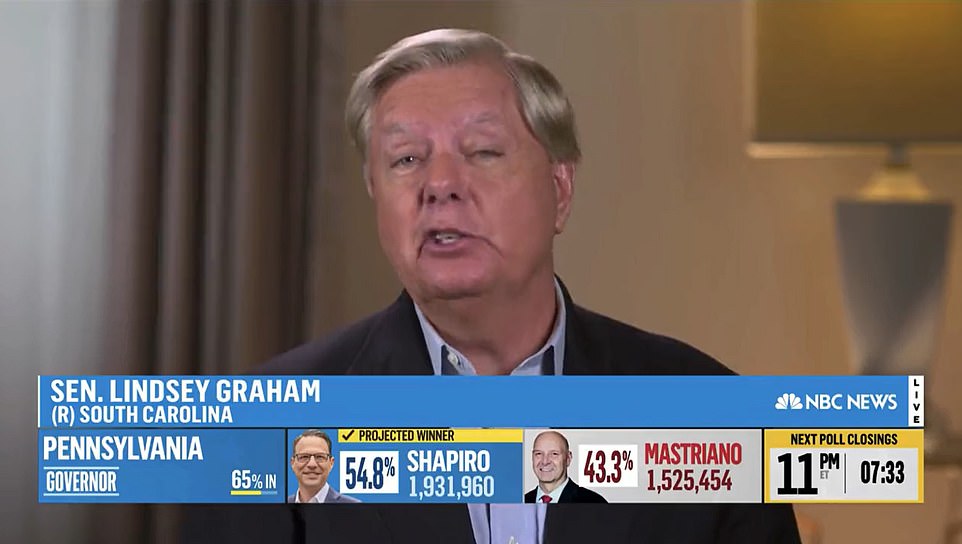 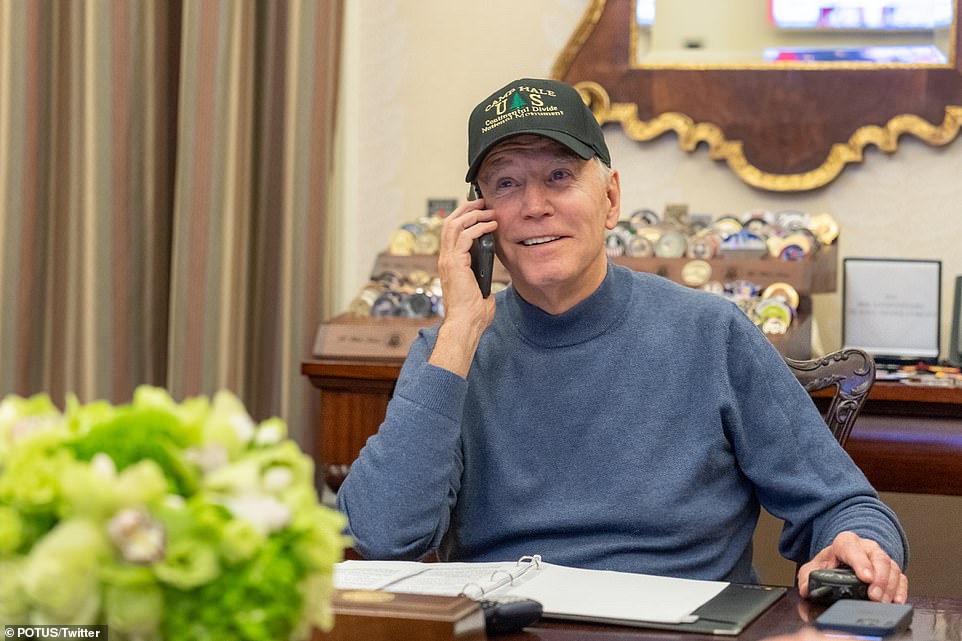 Pollsters had forecast a heavy blow for Joe Biden at the midpoint of his four-year term, believing Republicans would make huge gains in the House and tip the balance in the Senate 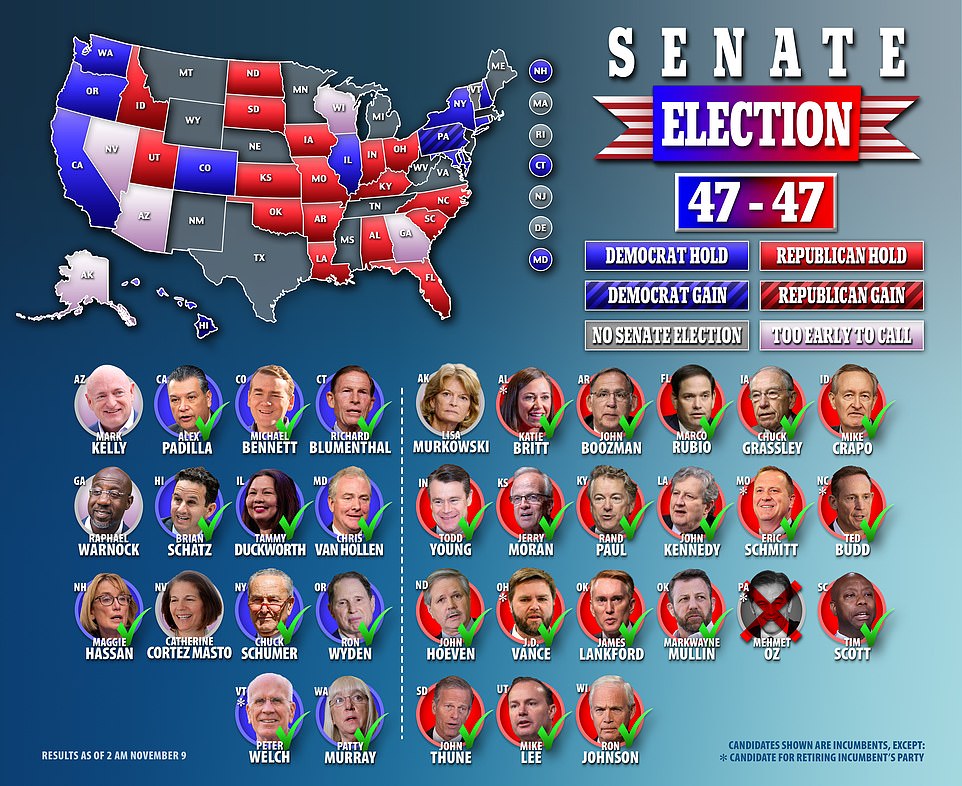 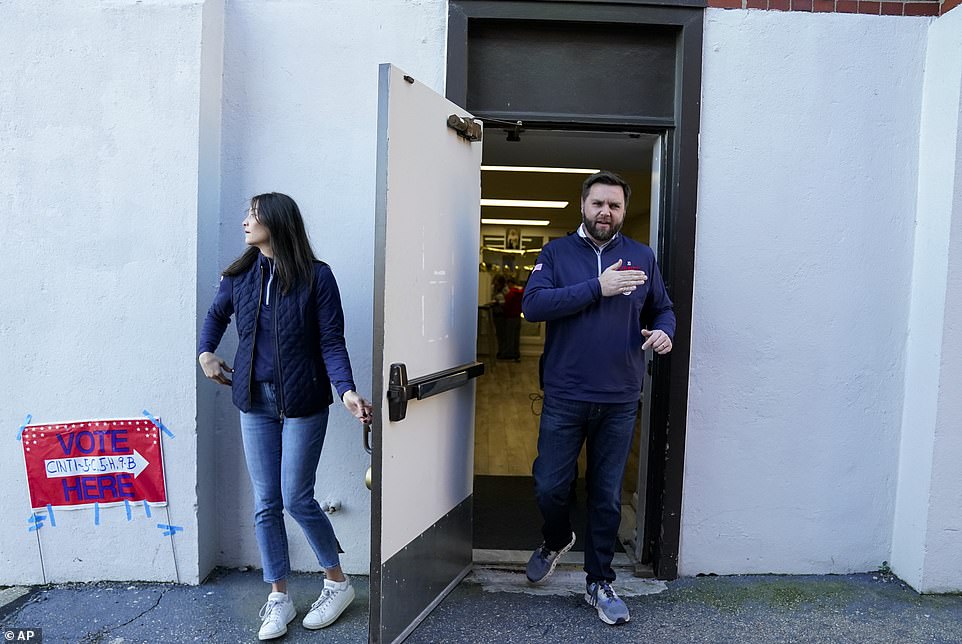 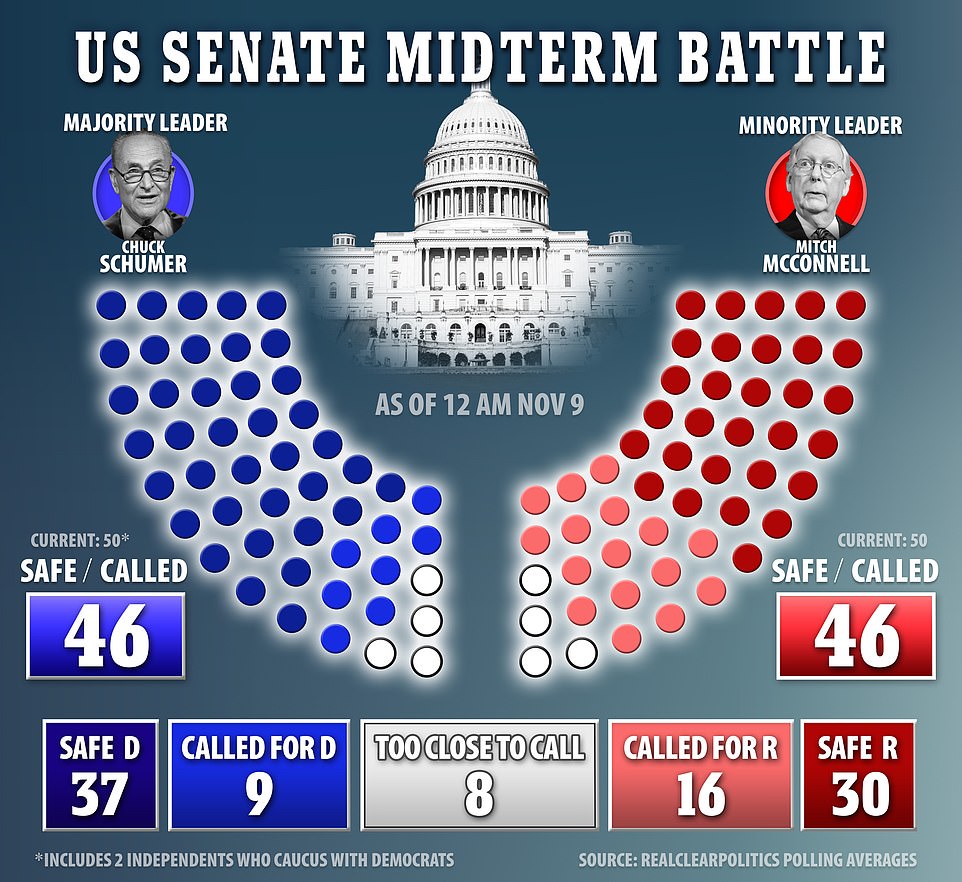 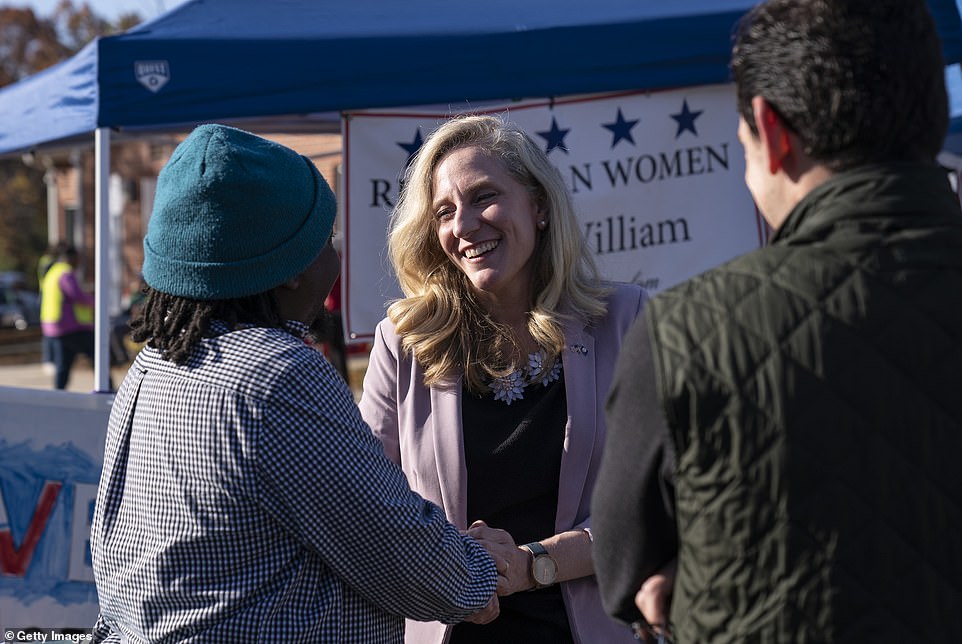 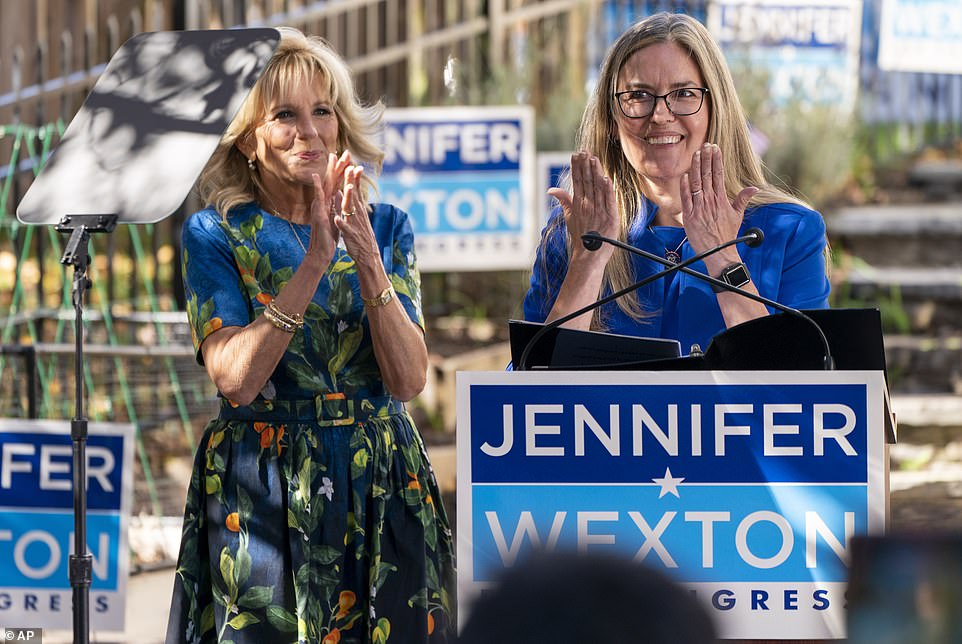 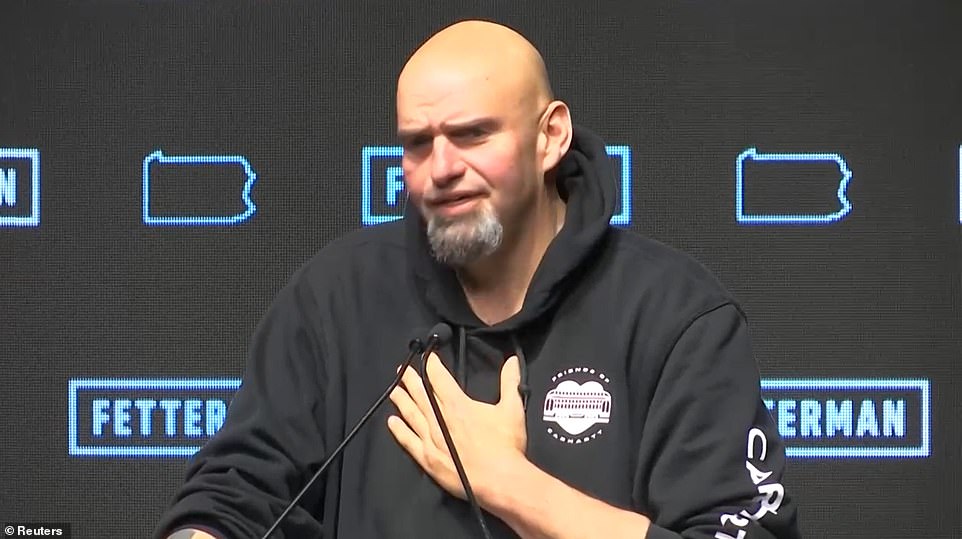 Democratic Senate hopeful John Fetterman defeated Republican Dr. Mehmet Oz in Pennsylvania, wrapping up one of the most closely watched races of the midterms just before 1 a.m. Wednesday morning

‘We launched this campaign almost two years ago – and we had our slogan – and it’s on every one of those signs right now: every county, every vote,’ Fetterman said to a rowdy crowd still gathered at Stage AE in Pittsburgh. ‘And that’s exactly what happened – we jammed them up. We held the line.’

‘I never expected that we would turn these red counties blue, but we did what we needed to do,’ he continued. ‘And that’s why tonight I’ll be the next U.S. senator from Pennsylvania,’ Fetterman added.

Fetterman had faced questions about his fitness for office after suffering a stroke just days before the state’s primary, but he nonetheless bested Republican Dr Mehmet Oz in a major rebuke to Trump, whose endorsement helped Oz win his competitive primary.

Representative Kevin McCarthy, the Republican poised to be house speaker if the party takes control of the chamber, sounded a note of optimism as he told supporters: ‘When you wake up tomorrow, we will be in the majority.’

Democratic house speaker Nancy Pelosi said: ‘While many races remain too close to call, it is clear that House Democratic Members and candidates are strongly outperforming expectations across the country.’

In the race for the house of representatives, Democrats kept seats in districts from Virginia to Kansas and Rhode Island, while many districts in states like New York and California had not been called.

His was among the most high-profile races in the country. But New Hampshire Democrat Sen. Maggie Hassan was able to hang onto her seat, depriving the GOP of a potential pickup opportunity as part of its hope for a takeover.

And Democrats were heartened when they held onto two out of three Virginia House seats that were heavily targeted by Republicans: Democrats Abigail Spanberger and Jennifer Wexton won their races while Democrat Elaine Luria fell to her GOP competition.

Luria’s seat – along with a victory by GOP candidate Andy Ogles in Tennessee’s 5th district and two Florida House seat wins – has the House majority within Republicans’ grasp.

In another good sign for Democrats, their candidate Seth Magaziner won in a Rhode Island House seat that was heavily contested by both parties. And Democratic Rep. Andy Kim hung on in New Jersey in what was seen as a close race.

Biden made a series of congratulatory calls to Democrats on Tuesday night, including Democratic Senator Michael Bennet of Colorado, who was in a tough than expected re-election campaign.

But other key Senate races in Arizona, Georgia, Nevada, and Wisconsin are too close to call.

The White House released a photo of Biden on the phone, dressed casually in gray sweatshirt and baseball cap, cell phone in hand.

Democratic incumbent Raphael Warnock holds less than a one point lead over Republican ex-NFL star Herschel Walker in the key Senate race that will likely head to a runoff election in December that could decide which party takes the majority.

With 97 percent of precincts reporting, Warnock was up by about 31,000 votes, leading Walker 49.4 to 48.6, on a night that Democrats across the country defied the odds and a GOP red wave failed to materialize.

If neither candidate breaches the 50 percent threshold, the race heads to a December 6 runoff, per Georgia’s election law.

A third-party Libertarian will likely prevent either candidate from cinching a majority.

The path is reminiscent of 2020 for Warnock, when he was forced into a runoff with then-incumbent GOP Sen. Kelly Loeffler and came out on top.

The DeSantis and Rubio wins in the Sunshine state cemented Republicans’ grip there. Donald Trump has made it his new home state and is spending election night at his Mar-a-Lago estate in Palm Beach.

‘Marco had a fantastic evening,’ Trump said in brief remarks where he pointed to a handful of winners he had endorsed, without mentioning DeSantis.

DeSantis’ win sets up an intriguing dynamic for the next two years. He’s rumored to be considering at 2024 bid. Trump, who helped DeSantis win his first gubernatorial race, will announce his White House intentions next week.

Trump held a campaign rally with Rubio in Miami on Sunday while DeSantis held a competing rally in another part of the state. Still, the former president said he voted for DeSantis when he cast his ballot in Palm Beach on Tuesday morning.

DeSantis defeated Democrat Charlie Crist, who had previously served the state as a GOP governor before he switched parties. Crist campaigned with President Joe Biden last week but that couldn’t help him across the victory line.

In another governor’s race, Democrat Wes Moore won the gubernatorial race in Maryland. He will be the first black governor in that state. President Biden and first lady Jill Biden campaigned for him on Monday night – their final rally of the 2022 midterm election.

In Georgia, Democrat Stacey Abrams called Republican Gov. Brian Kemp concede. Kemp held off a second challenge from Abrams – whom he defeated four years ago – and the fury of Donald Trump to win a second term. 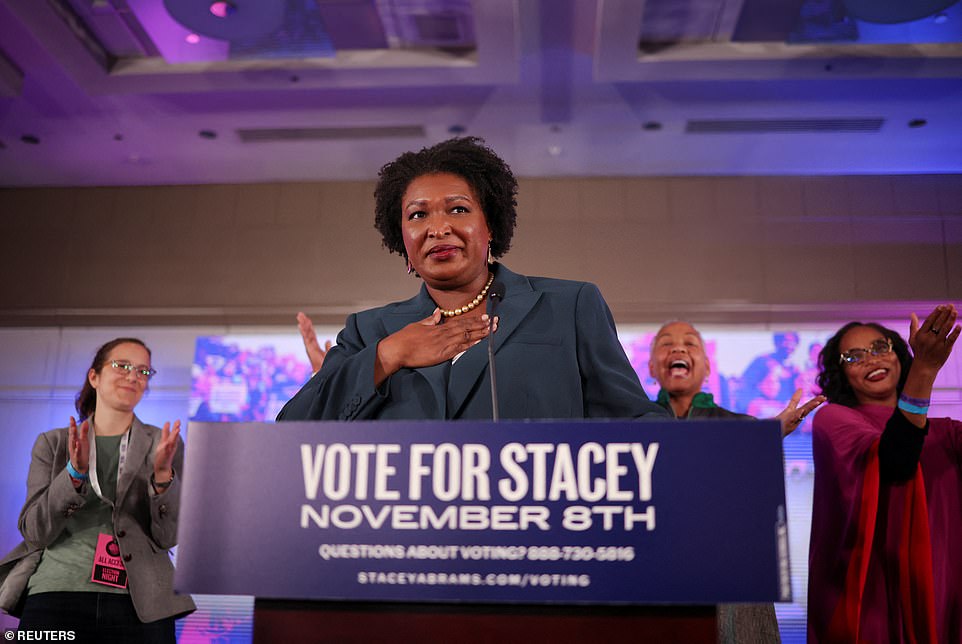 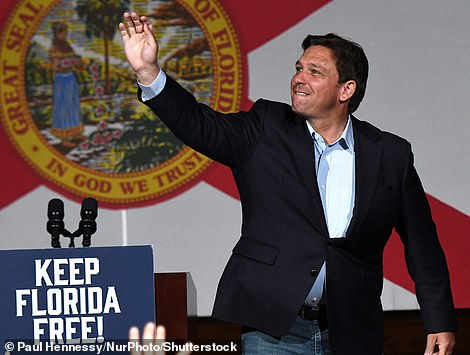 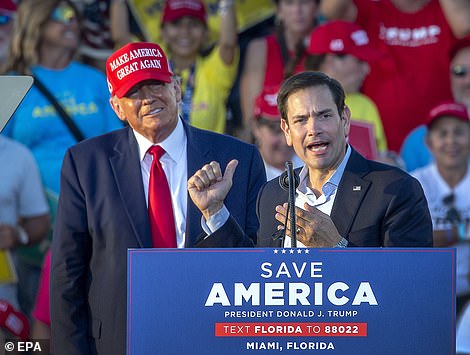 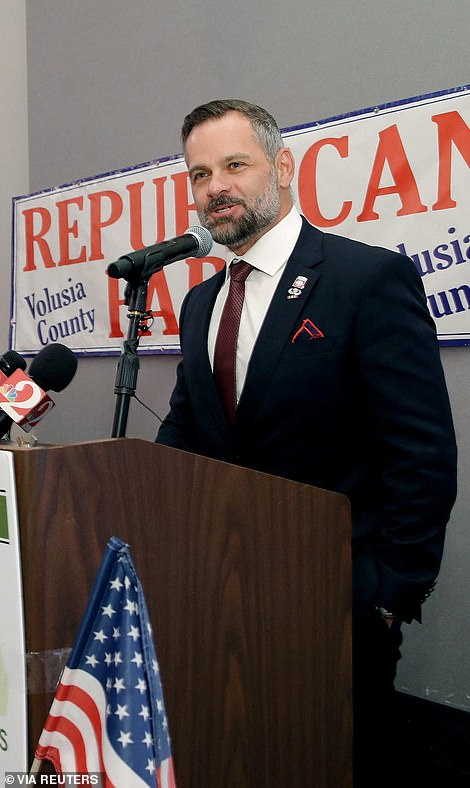 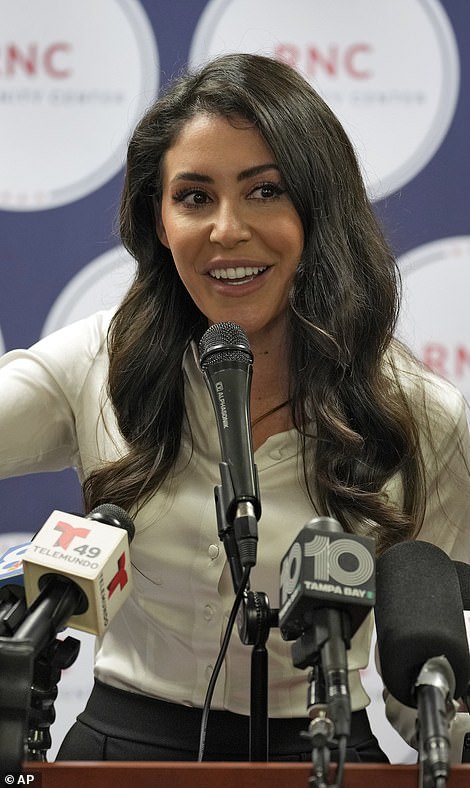 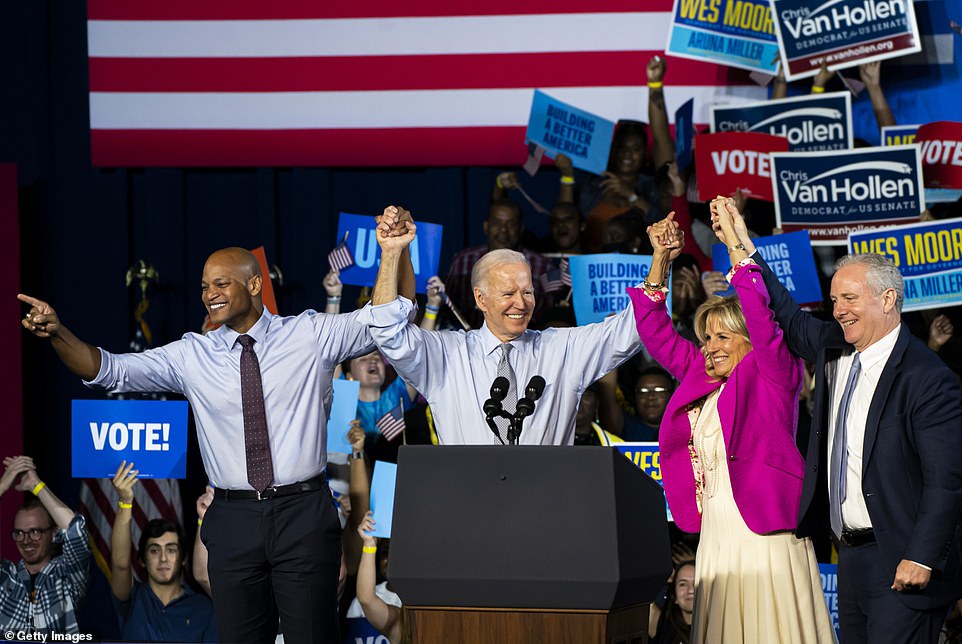 New York Democratic governor Kathy Hochul managed to turn back a challenge from Republican Lee Zeldin to cling to the governor’s mansion in what had become a competitive race in a Blue-leaning state.

The race tightened in the polls in recent weeks as Zeldin, a U.S. Republican House representative, hammered Hochul on crime and other issues while getting a Donald Trump endorsement and fundraising support from the former president.

NBC called the race for Hochul, and she tweeted she was ‘deeply honored’ to have been elected.  She was leading 55-45 with nearly two thirds of the vote in Tuesday night.

Zeldin refused to concede, telling supporters his position would improve as more votes come in from Long Island.

As the first polls close across the nation, about 33% of voters called inflation the most important issue as they cast their ballot, according to the exit polls of voters conducted by the television networks, with about 27% citing abortion.

Other voters cited crime, gun policy and immigration as their chief concerns.

In troubling signs for Biden, three-quarters of the electorate that voted Tuesday felt negative about the economy and more than three-quarters said that inflation has caused hardship for them and their family over the past year, the exit polls found.

They gave the president a 45% approval rating for his time in the Oval Office, citing their unhappiness with the economy.

Biden’s low numbers had many Democrats – particularly those in close contests – holding the president at arms’ length as they tried to disassociate their candidacy with his track record.

The exit polls found that about half of voters said that Biden was not a factor in their vote, while about 18% said their vote was to express support for Biden, and about one-third that it was to express opposition to him.

All 435 seats in the House and one-third of the Senate, along with several governor races, are being decided on Tuesday. Results could take several days to process as votes are counted. Many Senate and governors races were polling within the margin of error.

Many will see Tuesday’s results a message voters are sending about President Biden’s first two years in the Oval Office.

In the days leading up to Election Day, Biden stuck mainly to blue areas of the country, trying to get Democrats to come out for the party.

He spent Tuesday behind-closed-doors at the White House. He called into a morning radio show and did thank you calls to Democratic officials. 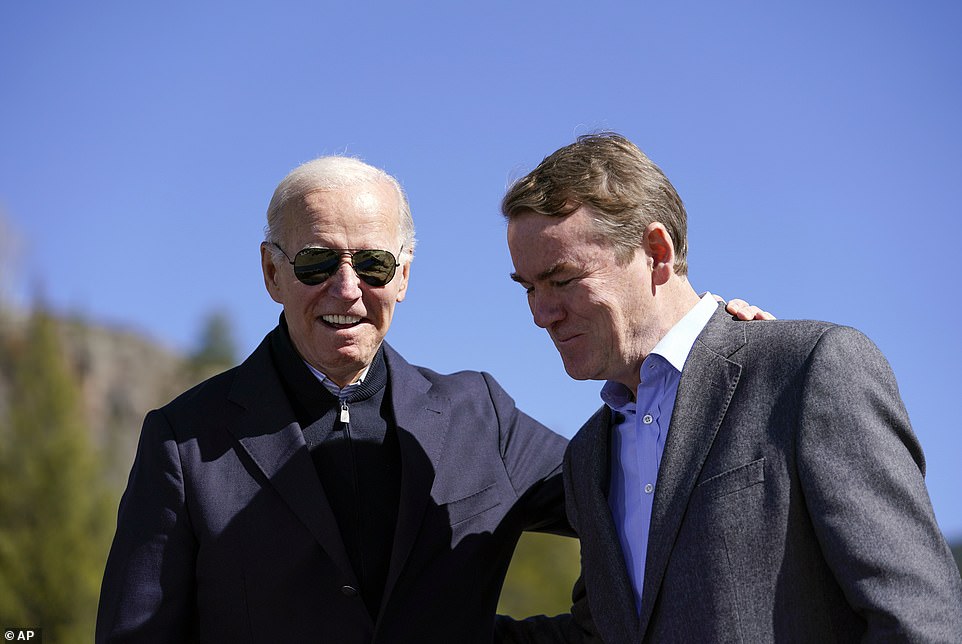 Democratic Senator Michael Bennet of Colorado, who was in a tough than expected re-election campaign, did squeak out a victory in good news for Democrats – above Bennet with Biden in Colorado in October 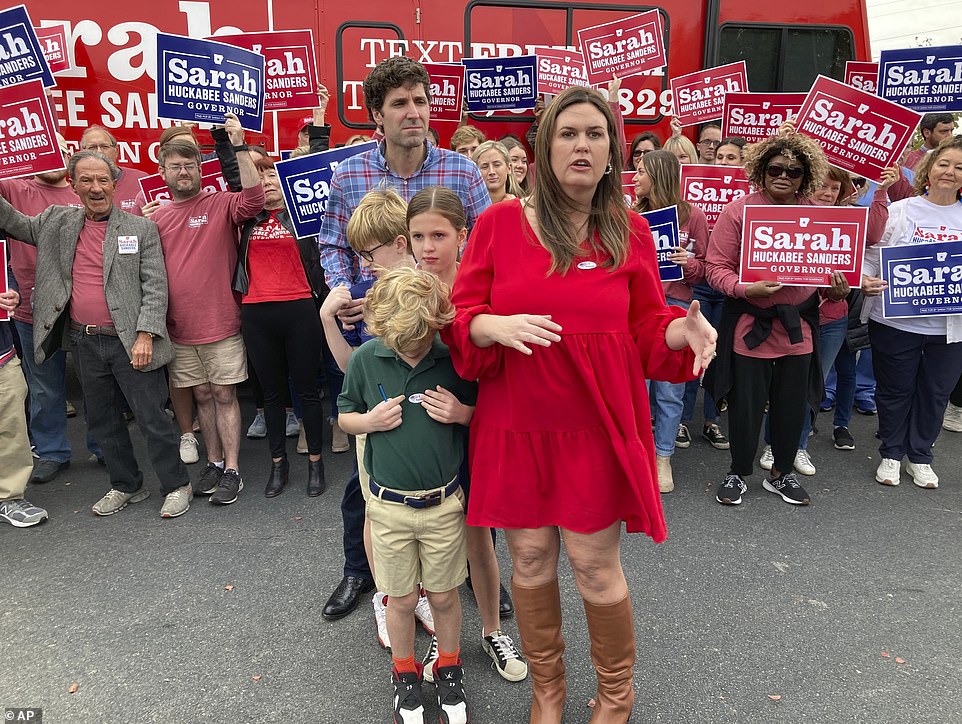 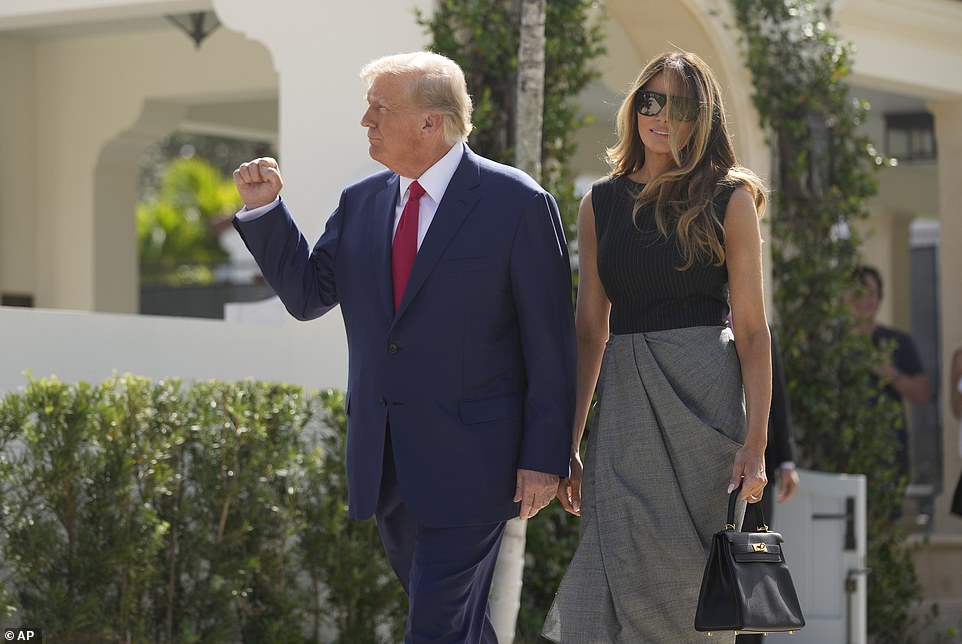