Archaeologists have unearthed the remains of more than 140 children in the northern coast of Peru in what appears to have been the largest instance of mass child sacrifice in the Americas – if not the entire world, according to a report from National Geographic.

The macabre discovery was made on a low bluff just a thousand feet from the Pacific Ocean, amid cinder block residential compounds in La Libertad outside Trujillo, Peru's third-largest city. It's estimated that the children – and 200 young llamas – were sacrificed about 550 years ago, when the area was home to the pre-Columbian Chimú civilization. The Chimú was the second-largest empire in Peru before Spanish colonisation, next to the Incas, who were also known to sacrifice children during rituals. 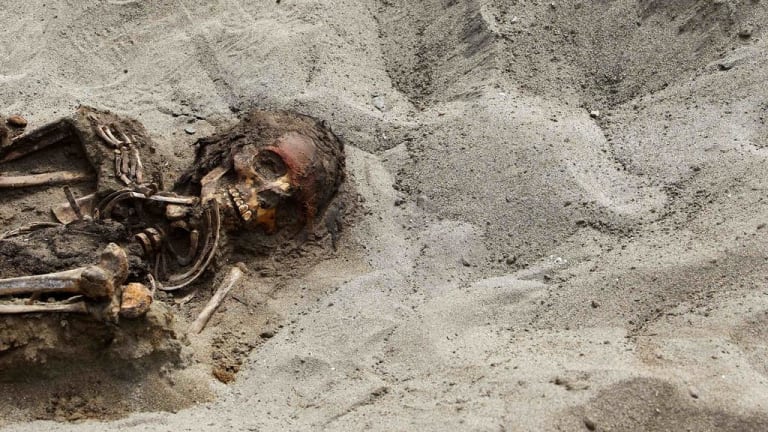 In the first round of excavations, the remains of 42 children and 74 camelids were unearthed in the fishing town of Huanchaquito, Trujillo.

Until now, the largest incident of mass child sacrifice was believed to have occurred in the Aztec capital of Tenochtitlán – modern-day Mexico City – where 42 children's bodies had been discovered.

Ongoing scientific investigations into the Peru site, formally called Huanchaquito-Las Llamas, are being carried out by an international team funded by the National Geographic Society. The team is led by Gabriel Prieto of the Universidad Nacional de Trujillo and John Verano of Tulane University.

"I, for one, never expected it," Verano told the magazine about the magnitude of the discovery.

"And I don't think anyone else would have, either."

Excavations at Huanchaquito-Las Llamas began in 2011, when the remains of 42 children and 76 llamas were found at a 3500-year-old temple nearby. The excavations continued through 2016, and resulted in the discovery of more than 140 sets of child remains and 200 juvenile llamas, according to National Geographic.

Items found in the burials, such as ropes, are radiocarbon dated to between 1400 and 1450, toward the end of the Chimú Empire's rule, before they were conquered by the Incas.

It's estimated that the children ranged from about 5 to 14 years old, with the majority between the ages of 8 and 12, according to the magazine. The llamas were all less than 18 months old and were buried facing east, toward the Andes.

The children's skulls are stained with red, cinnabar-based pigment, evidence that they were sacrificed in ritual killings, as the pigment was used in ceremonies. Cuts to both the children and llamas' skeletal remains – particularly to the sternum and rib bone – suggest their chests were cut open, likely so that their hearts could be removed, according to National Geographic.

Researchers and anthropologists are now trying to understand the motivation behind the large-scale sacrifice, and why the burial pits combined children with baby llamas.

"When people hear about what happened and the scale of it, the first thing they always ask is 'why?' " Prieto told National Geographic.