Record 86 migrants are seized in a single day trying to get to Britain – amid warnings the numbers will soar further as a gym housing them 1,000 in Dunkirk is closed

Scores of UK-bound migrants have been intercepted by the Border Force as they attempted to cross the Channel in small boats.

Some 86 men, women and ‘claimed minors’ attempted the perilous journey on Tuesday, with some managing to land on beaches before being detained, the Home Office said.

These figures arrive off the back of an announcement that a gym in Dunkirk where up to 1000 migrants are living is expected to close. 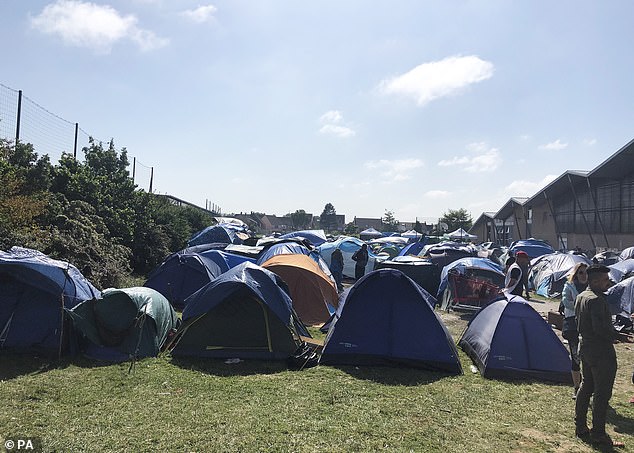 This closure could prompt a spike in Channel crossings, refugee charity Care4Calais has said.

Care4Calais founder Clare Moseley said that many of those living at the Espace Jeunes du Moulin gym are families with young children, some of whom have fled the Islamic State conflict in Iraq.

She said: ‘There has been a bit of uncertainty as to when it’s going ahead.

‘The latest we have heard is it’s likely to be Thursday. We think the Calais one is probably going to be tomorrow.’

Mrs Moseley said the French government will offer evicted migrants alternative accommodation, but predicts a significant number will return to the coast based on previous instances. 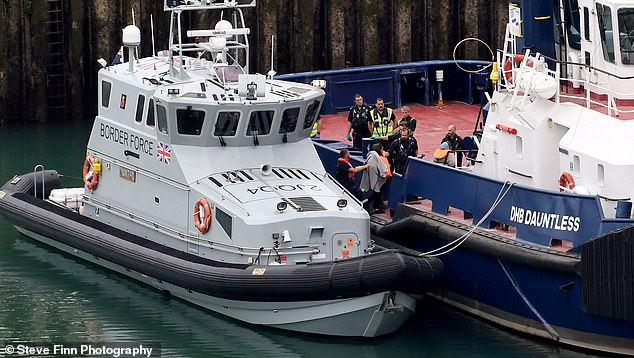 The total number of migrants who have made it across the Dover Strait – the world’s busiest shipping lane – has exceeded 1,000 already this year

‘The problem is that they will go back to sleeping rough and that means forests and the wasteland. These are families, some of them have young children.

‘All these people want is for their asylum claims to be heard. If there was a safe and legal way for this to happen they wouldn’t be getting on boats and lorries.’

There are between 600 and 1,000 people estimated to be living at the gym in the Grande-Synthe area of Dunkirk.

It comes after Home Secretary Priti Patel said urgent action was needed to put a stop to the wave of crossings, after she met French interior minister Christophe Castaner in Paris last month.

Early on Tuesday, two small vessels carrying a total of 23 people were intercepted by a Border Force cutter before being taken to immigration officials for questioning.

They were found to be medically well and presented themselves as Iranians, Afghans, Pakistanis and Filipinos, the Home Office said. 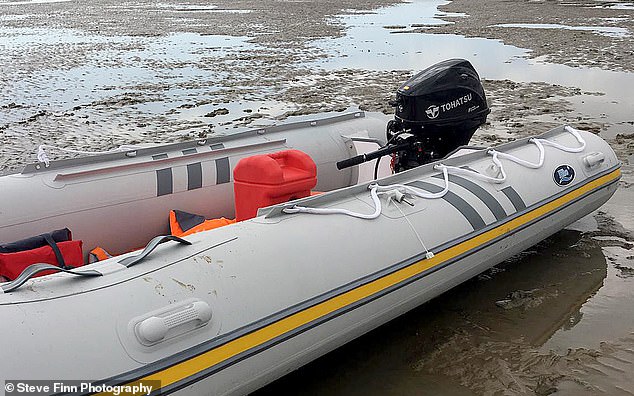 At about midday, a boat carrying 18 people near Dungeness, Kent, was taken to Dover by the Border Force, with 14 presenting themselves as Iranian, three as Iraqis, and one as Vietnamese.

Around the same time, a boat carrying 23 people was also intercepted in the Channel, with those on board saying they were both Iranian and Ethiopian, the department added.

Two separate groups, who presented as Iranians, Iraqis and Turks, made it to beaches in East Sussex without being detected at sea, but were later detained and transferred to immigration officials.

A Home Office spokesman said: ‘We are working closely at all levels with the French authorities to tackle this dangerous and illegal activity.

‘Last month the Home Secretary and her French counterpart agreed to intensify joint action to tackle small boat crossings in the Channel.

‘This includes drawing up an enhanced action plan to deploy more resources along the French coast to intercept and stop crossings.’ 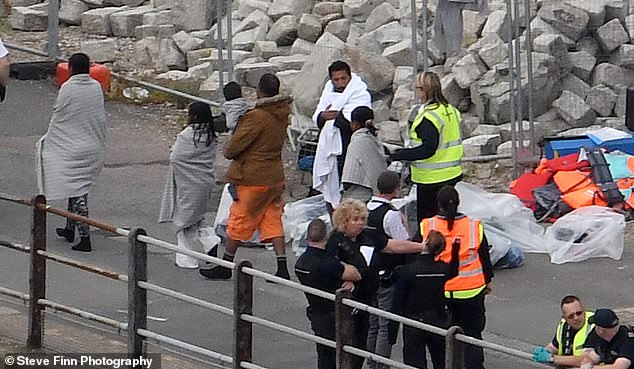 The two boats had nationals of Pakistan , Iran , Afghanistan , and the Philippines on board. The migrants are pictured on UK shores being helped by authorities

The Home Office declared the matter a major incident under former home secretary Sajid Javid and pledged millions of pounds to tackle the crisis, dispatching the three Border Force cutters.

A plan drawn up in January included a £6 million investment in security equipment, CCTV coverage of beaches and ports and a mutual commitment to return migrants under international and domestic laws, the department said.

But the number of migrants taken in by UK authorities so far this year is thought to have already passed 1,000. 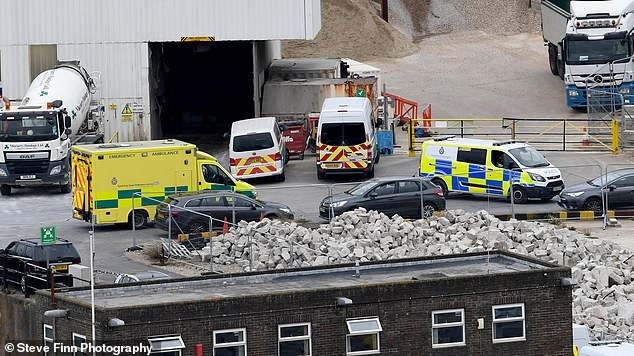 Police and ambulance services are pictured at the scene. The individuals were taken to Dover, where they were medically assessed and found to be well, before being transferred to immigration officials for interview

Nearly 40,000 failed asylum seekers are still in the UK as the numbers being removed drop by half in four years

Close to 40,000 failed asylum seekers are still residing in the UK despite being targeted for removal, as numbers of those being relocated are revealed to have dropped by half in four years.

Official figures released by the Home Office have been branded a ‘disgrace’ by Tory MP Philip Hollobone, after the government had previously come under fire for its ‘hostile environment’ towards migrants.

The UK’s policy on immigration has been fiercely criticised after the Windrush scandal which unfairly forced families of West Indian migrants to leave.

It has now been acknowledged that many failed asylum seekers across the UK will never leave and in doing so, will form a right to stay. 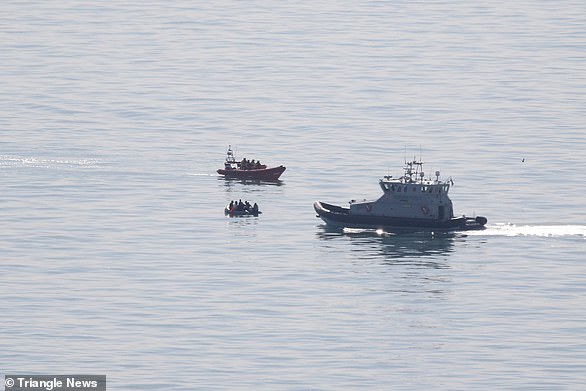 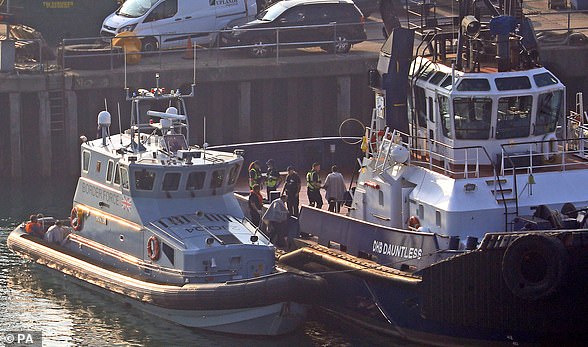 Figures show that the number of unsuccessful applicants branded ‘subject to removal action’ rose 39,932 in the year to June, up from 34,752.

These latest figures come as nearly 150 migrants were found trying to cross the Channel into the UK over the last week.

On Friday, Prime Minister Boris Johnson warned illegal migrants that they would be sent back if they risked crossing the Channel.

This is while the number of rejected applicants has actually fallen, and according to The Times, only 3,471 left the country in the year to June, down 27 per cent from 4,819 the previous year.

Conservative MP for Kettering, Mr Hollobone said: ‘These asylum figures are a national disgrace. The number of failed asylum seekers awaiting removal is going up while the number of removals is going down. The longer these people stay in this country illegally, the greater the chance they never, ever leave. The new home secretary needs to get a grip on this immediately.’ 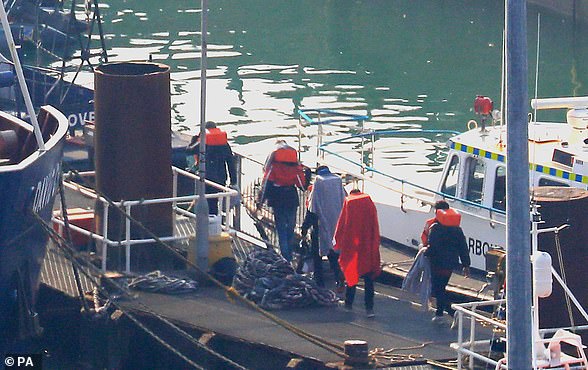 This year more than 850 migrants have crossed the Channel, but the Home Office has claimed that more than 65 of those found had returned to Europe.

This is while home secretary Priti Patel gave her department just 72 hours to conjure an emergency plan to tackle the issue.

Ms Patel has since been in contact with the French interior minister Christophe Castaner, with sources claiming we need French support.

‘The focus will be on practical support to assist French patrols to deter migrants from embarking upon these perilous crossings organised by criminal gangs.’

The 40,000 which are subject to removal can also make further submissions in their cases such as last minute legal challenges. 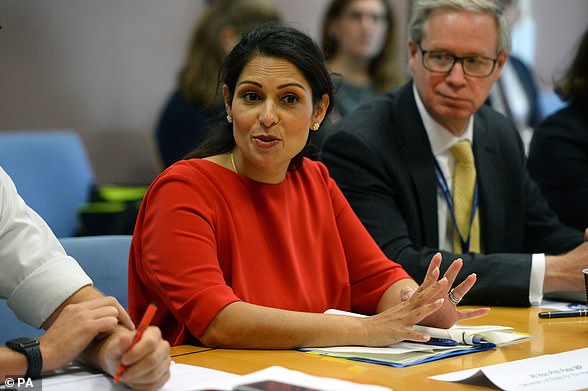 Home Secretary, Priti Patel, can be seen above during a visit to the Port of Dover to meet with officials to discuss how to ensure the UK’s smooth exit from the EU. Miss Patel has given the Home Office a 72 hour ultimatum to come up with an emergency plan to tackle the English Channel’s migrant crisis

Former director general of immigration enforcement at the Home Office, David Wood said: ‘In reality the longer they stay the more difficult it is to remove them as they get married, have children and build roots in the UK. They then can make further claims to stay on the basis of the right to family life.

‘The normal rule we worked on was once immigrants had been here for ten years you could not remove them and they would successfully apply for indefinite leave to remain. You will not find anything written down but that was generally the reality.

‘The number of removals has fallen off a cliff. Resources for immigration enforcement have dwindled and you would need a lot more cash and manpower to be able to boost the numbers.’