Snippy Corbyn was grudging and classless: QUENTIN LETTS on the Labour leader’s response to May’s denouncement of Russia’s novichok thugs

Aghast silence fell on the Commons as the Prime Minister detailed the movements of two suspected Russian military assassins who loped down to Salisbury in March. Look in your diaries. It was the weekend of the late-winter snows. Beasts from the East.

The House stilled as Theresa May made a Statement laying bare the itinerary of ‘Alexander Petrov’ and ‘Ruslan Boshirov’, names our police believe to be aliases. Detectives had traced where those men stayed in East London – traces of poison were found in a room at their hotel – and which Underground lines they used to reach Waterloo station ‘at approximately 8.05am’ on Sunday March 4 before catching a train to Salisbury.

An early Sunday morning. In England’s cathedral shires, congregations were sinking to their knees for the start of Cranmerian communion. At Waterloo railway terminus two Russian thugs may have fingered a phial of fatal nerve agent, their thoughts black with intent. 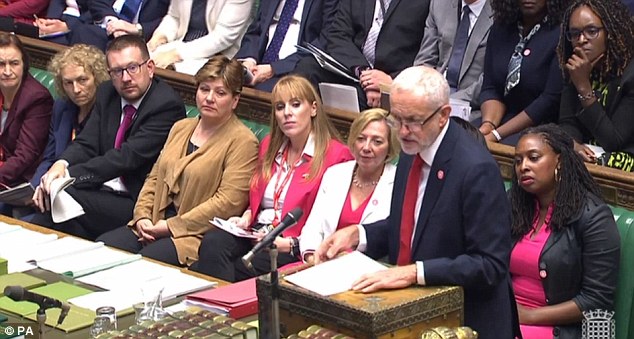 Jeremy Corbyn, pictured, was a classless piece of work yesterday in his response to Theresa May’s statement on the Salisbury attack by Russian assassins in March 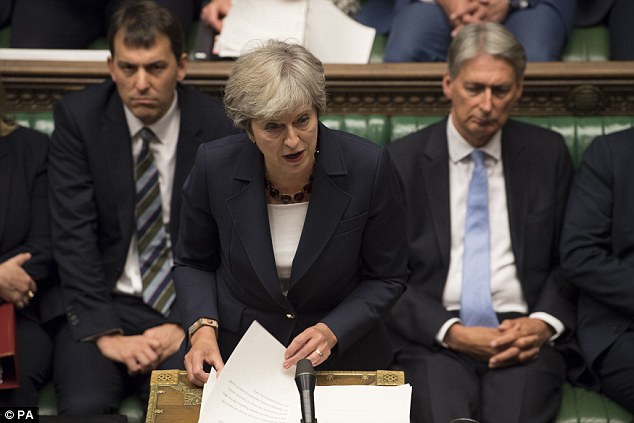 Mrs May’s speech was all the more chilling for her pared-back vocal delivery. Reconstruction of those movements somehow lent fresh menace to the alleged mission. Not that it succeeded.

As Bill Wiggin (Con, N Herefordshire) pointed out, the suspects failed to kill the Skripals, although poor Dawn Sturgess would die. Mrs May read the charge sheet: conspiracy to murder, attempted murder, use and possession of novichok, causing grievous bodily harm. Humdrum ‘GBH’ brought a touch of bathos to this international crisis.

More from Quentin Letts for the Daily Mail…

‘We were right to say in March that the Russian state was responsible,’ said Mrs May.

‘Now we can go further. The Government has concluded that the two individuals named by the police are officers from the Russian military intelligence service, also known as the GRU.’

This earned gasps from the House. Or at least most sides of it. Jeremy Corbyn and his neighbour Emily Thornberry slanted their heads with expressions of sour ennui. Mr Corbyn’s response to Mrs May was a classless piece of work: grudging, equivocal, snippy, approaching only the minimum of decency.

He conceded the attack was ‘an outrage’ and that there had been ‘a superhuman police effort’ but he wanted to know what steps Mrs May and Co were taking to secure the Kremlin’s co-operation in bringing the suspects to trial.

Conservative MPs gave him the bird for this. ‘Get real!’ shouted one. It did sound as if the Labour leader still did not comprehend the Russian state’s likely complicity in the attack. Mr Corbyn bridled. ‘This is a serious matter,’ he said, his rising voice petulant.

Miss Thornberry shook her head to show she disapproved of and put herself morally above the Tories’ molten anger. Later Mr Corbyn suffered a slip of the tongue when he said he wanted to ‘condemn’ the police. He swiftly corrected this to ‘commend’ but it was an eye-rolling moment. Boris Johnson (Con, Uxbridge & S Ruislip) was the first backbencher to be given the floor. He deplored Mr Corbyn’s ‘somewhat weaselly language’.

Later Corbyn critic Chris Leslie (Lab, Nottingham E) urged Mrs May to ‘ignore the cranks and the ideological extremists’ who sided with Russia to ‘sow mistrust in our security professionals’.

Richard Benyon (Con, Newbury) spoke of the Kremlin having ‘fellow travellers and useful idiots’ in the West. Several Labour MPs had chosen to stay away from the Chamber, perhaps not wishing to have to endure another of Mr Corbyn’s unpatriotic performances on the Salisbury attack. Towards the end, even his frontbench was pretty empty.

Ian Blackford, leader of the SNP, found a more certain tone of gravity than his Labour counterpart. Dominic Grieve (Con, Beaconsfield) described the Russian state as ‘a gangster organisation’ and hoped we would make it harder for Russians to enter our country.

‘We must unreservedly condemn Russia,’ said Yvette Cooper (Lab, Normanton) – something Mr Corbyn had omitted to do.

Chris Bryant had ‘no doubt’ Vladimir Putin ‘himself personally’ was at the end of the bloody trail. Extraordinary times.