London: Queen Elizabeth will no longer attend Service of Thanksgiving for her seven decades as monarch after experiencing some mobility discomfort when she appeared at a military parade on Thursday, London time, Buckingham Palace said.

The queen had been due to attend the service at St Paul’s Cathedral on the second day of celebrations for her Platinum Jubilee. 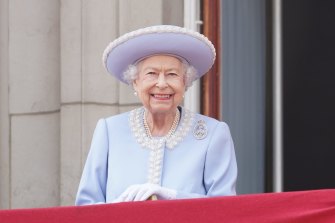 Queen Elizabeth II watches from the balcony of Buckingham Palace during the Trooping the Colour parade.Credit:Getty Images

Earlier on Thursday she appeared on the balcony of Buckingham Palace, waving to thousands of well wishers.

“The Queen greatly enjoyed today’s Birthday Parade and Flypast but did experience some discomfort,” the palace said.

“Taking into account the journey and activity required to participate in tomorrow’s National Service of Thanksgiving at St Paul’s Cathedral, Her Majesty with great reluctance has concluded that she will not attend.”