The Russian military ‘doctor of death’ allegedly behind the attempted murder of ex-spy Sergei Skripal personally received a Hero of Russia award from President Vladimir Putin in 2014, a group of investigators say.

The Bellingcat group of investigative journalists quoted “people closely familiar” with the man’s family saying the award was for the man’s work in Ukraine and Crimea, which Russia annexed in 2014 after secretly supporting local pro-Russian groups. 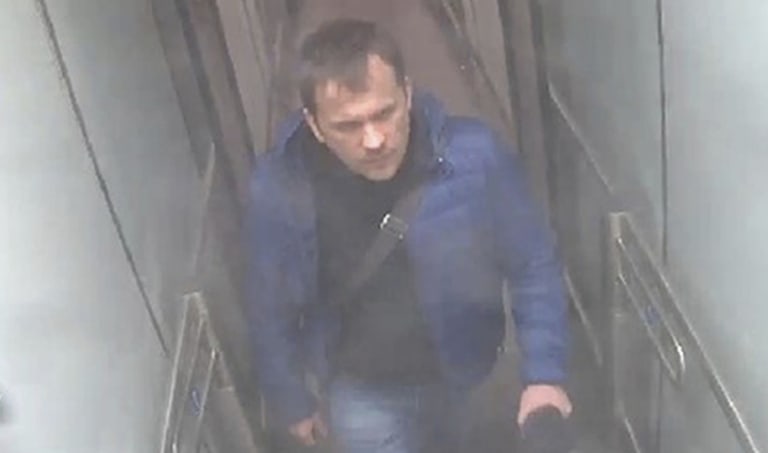 On Monday Bellingcat said it had “conclusively identified” the second suspect in the Salisbury poisoning as Alexander Yevgenyevich Mishkin, 39, who allegedly travelled to Britain in March to carry out the assassination attempt using the nerve agent novichok.

He travelled with Colonel Anatoliy Chepiga, 39, who had also previously received the Hero of Russia award from Putin. Both were agents of Russia’s military intelligence arm, the GRU.

Bellingcat said the inclusion of a trained military doctor on the alleged assassination team in Salisbury “implies that the purpose of the mission [was] different than information gathering or other routine espionage”.

Sources familiar with Russian military intelligence said “a doctor would be a mandatory addition to a team tasked with poisoning a target – either for ensuring effective application of the chemical, or to protect team members from accidental self-poisoning”. 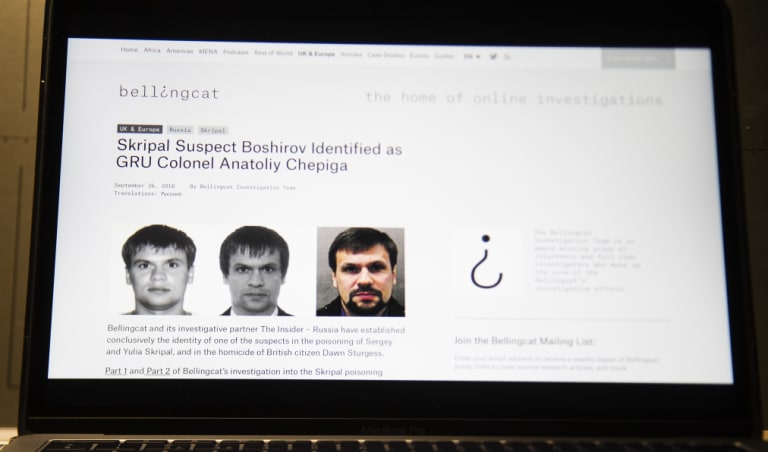 The website of the Bellingcat group, which has been investigating the suspects in the March poisoning of Sergei Skripal and his daughter in the UK.Credit:AP

Bellingcat said they had cracked the puzzle of the man’s identity partly through a mistake by the GRU, which did not change the first name or birthdate of the agents when it gave them fake identities.

Bellingcat reporters travelled to Mishkin’s remote home village once they discovered his identity – and found that the man’s grandmother had “vanished” just days earlier.

But the reporters were able to confirm his identity with a handful of local residents – some of whom had seen a picture of the man shaking hands with Putin.

The BBC has independently confirmed Bellingcat’s identification of the suspect as Mishkin. British officials have not disputed the claim, though they have not yet publicly confirmed it. 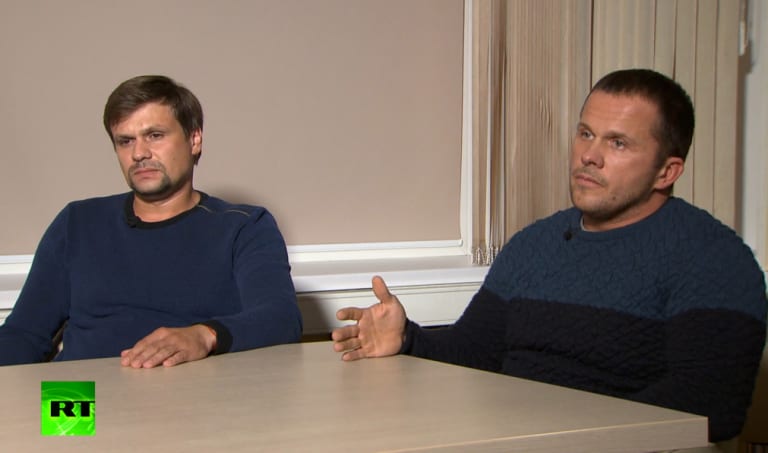 The men – appearing as ‘Ruslan Boshirov’ and ‘Alexander Petrov’ – on the Kremlin-backed RT news network.Credit:RT channel

The two men were previously identified by British authorities under the pseudonyms they used to travel to the UK.

A short Bellingcat report released on Monday revealed that:

The full report, presented by two Bellingcat reporters at Westminster on Tuesday, explained how they had pieced together evidence of the man’s identity from scraps of information on the internet, via leaked official databases and using a copy of personal documents, including passport dossiers.

Bellingcat worked with Russian investigative group the Insider on their report.

It revealed that Mishkin was born in 1979 in the small village of Loyga, north of Moscow. His grandmother was the village’s only doctor.

He moved to St Petersburg and enrolled at the S Kirov Military Medical Academy, specialising in undersea and hypobaric medicine for the Russian navy and graduating as a senior lieutenant.

Around this time he was recruited by the GRU, moved to Moscow and received his undercover identity.

Bellingcat said it had “incomplete” border crossing data showing that from 2010-2013 Mishkin travelled on his ‘Petrov’ persona several times to Ukraine, and to the Transnistrian Republic.

A previous Bellingcat report revealed that ‘Petrov’ also travelled to Amsterdam in 2016, as well as Kazakhstan, Tel Aviv, London, France and Switzerland – and to the UK for the attack on Skripal.

In late 2014 Mishkin was given the Hero of the Russian Federation Award, which Bellingcat was told was for activities “either in Crimea or in relation to [former Ukrainian president] Yanukovich”.

Putin has previously revealed his pride in – and close personal oversight of – the Russian special forces operation that snatched the fleeing pro-Russian Yanukovych out of Ukraine in early 2014 when local authorities were seeking to arrest him.

Bellingcat’s report said Mishkin moved to an “upscale” GRU-issued apartment in Moscow after he and Chepiga received their awards.

Bellingcat began its investigation with a passport photograph of ‘Petrov’, security camera photos and video from his interview on Russian channel RT in which he denied any role in the assassination attempt.

They also had a passport dossier of ‘Petrov’ including an earlier photo.

They had noticed that other GRU officers retained their first name, birthdate and place of birth when they were given new identities.

The ‘Petrov’ passport noted the man had a previous passport issued in St Petersburg, and Bellingcat found just one match in St Petersburg databases for a man with the same first name and birth date: Mishkin.

That man lived on the campus of the St Petersburg Military Medical Academy. Bellingcat said they spoke to one person who confirmed that Mishkin attended the academy, and had recognised him as ‘Petrov’ from the RT interview.

Bellingcat cross-referenced this information with other leaked databases, including a car insurance database which identified the same man as the driver of a Volvo registered to the GRU headquarters.

The investigators obtained a 15-year old passport belonging to Mishkin, and found the picture had a strong resemblance to ‘Petrov’. A professor of visual computing at the University of Bradfford used computer software to ‘age’ the photograph and “confirmed unequivocally” that Mishkin and Petrov were the same person.

At Loyga a reporter with the Insider “was able to meet and talk to many residents who all recognised ‘Alexander Petrov’… as ‘our local boy’ Alexander Mishkin”, the Bellingcat report said.

“At least 5 different residents told our reporter that Alexander Mishkin, who they knew worked in Murmansk or in Moscow ‘as a military doctor’, had received the Hero of Russia several years ago,” the report said.

“One source close to Mishkin’s grandmother (who is now in her 90s, and as a former doctor is still revered in the village) told us that the reason for the award is top secret, but that the understanding in the village was that it was ‘for Crimea or Yanukovich’.

“The same source told us that Alexander Mishkin’s grandmother possesses a photograph on which President Putin is bestowing the Gold Star medal (which goes with the award) to Alexander, and shakes his hand.

“The source said the grandmother treasures this photo and does not show it to everyone, and never lets anyone else hold it.”