Two women have glued themselves to Andy Warhol’s iconic Campbell’s Soup artworks at the National Gallery of Australia in a climate change protest.

In a video posted by a group called Stop Fossil Fuel Subsidies on Wednesday, one of the women is seen covering her hand and sticking it to one of the ten pictures in the exhibit inside the Canberra gallery before announcing “we are in a climate emergency”. 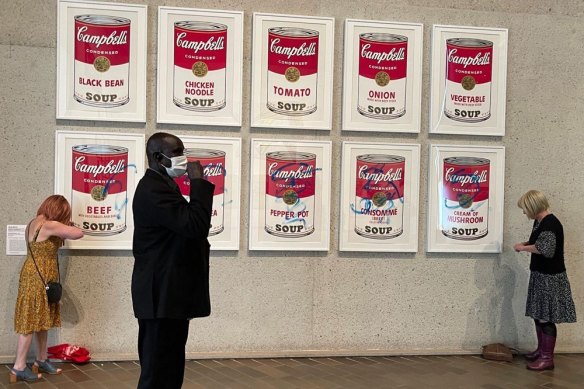 Protesters glue themselves to Warhol Campbell’s Soup display at the National Gallery of Australia.Credit:Twitter

The artworks on the bottom row of the exhibit were also defaced with blue spray paint.

The group claimed in the tweet they were “highlighting the danger of capitalism” by glueing onto art that depicts “consumerism gone mad”.

The protesters managed to glue themselves to the painting for about 30 seconds before being removed by security guards, so the glue did not have time to set, a gallery source said.

The security guards were quickly joined by Australian Federal Police at the scene and an investigation is under way. 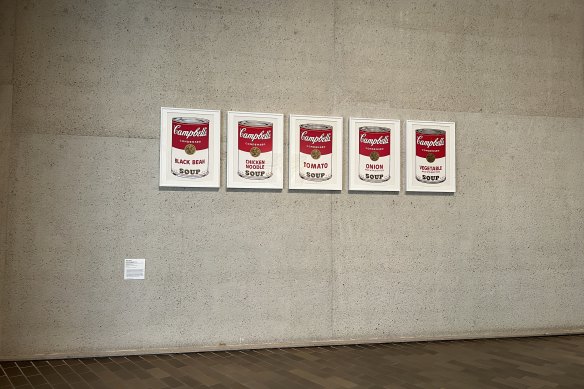 The Andy Warhol exhibit after the defaced artworks were removed. Credit:James Massola

The Warhol paintings had a clear plastic cover over them and the spray paint scrawled on the painting will be easily removed, but the paintings – which appear to be undamaged – have been taken down as a precaution.

A number of AFP and private security remain at the scene.

It is the second high-profile protest by the group in the last week. Last Friday a protester was escorted out of Parliament House after gluing her hand to an artwork in a public area of the building.

That protester, who was wearing a “stop fossil fuel subsidies” T-shirt, stuck her hand to the perspex screen covering a Dora Meeson banner, part of an exhibition of suffrage in Australia.