HONG KONG (Reuters) – Hong Kong anti-government protesters paralyzed parts of the Asian financial hub for a third day, with some transport links, schools and many businesses closing after an escalation of violence. 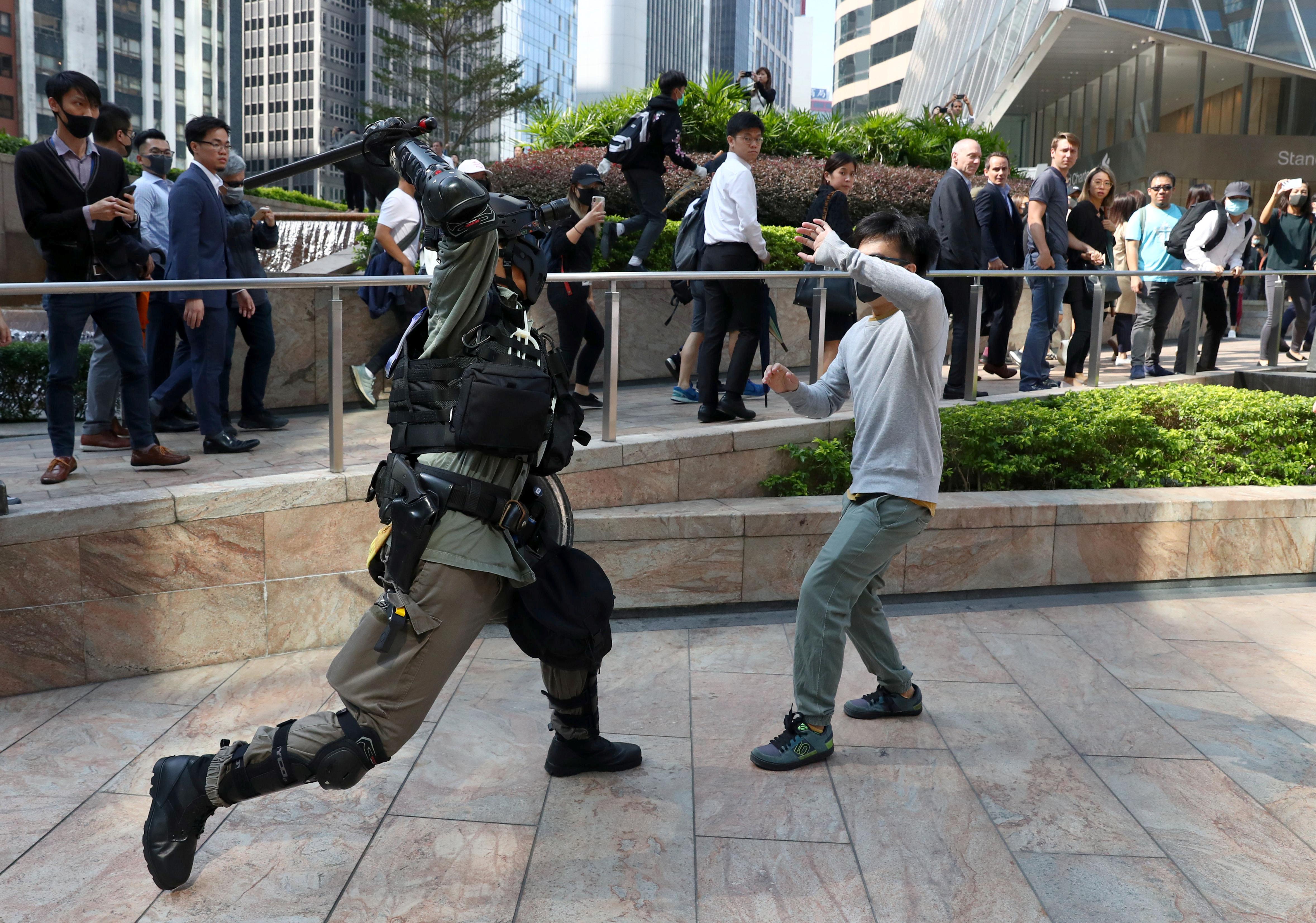 Around 1,000 protesters blocked roads in the heart of the city’s Central business district during the lunchtime rush hour. Wearing now-banned face masks and dressed in office wear, they marched and hurled bricks onto roads lined with some of the world’s most expensive real estate and luxury flagship stores.

Scores of riot police tried to disperse the crowds, grappling some people to the ground and beating others with batons near the city’s stock exchange.

Protesters and police had battled through the night at university campuses only hours after a senior police officer said on Tuesday the Chinese-ruled city had been pushed to the “brink of a total breakdown”. Many campuses remained tense.

The flare-ups came after police shot an unarmed protester at close range on Monday and police said “rioters” doused a man with petrol and set him on fire in some of the worst violence since protests began more than five months ago. Police are still investigating.

Protesters also planned demonstrations across the harbor from Central on the Kowloon peninsula and in the outlying New Territories, according to notices circulated on social media.

The disruptions caused delays for thousands of commuters who queued at metro stations across the city early on Wednesday after some railway services were suspended and roads closed.

Hong Kong’s Education Bureau said all schools would shut on Thursday for transport and safety reasons.

Protesters are angry about what they see as police brutality and meddling by Beijing in the freedoms guaranteed under the “one country, two systems” formula put in place when the former British colony returned to Chinese rule in 1997.

China denies interfering and has blamed Western countries, including Britain and the United States, for stirring up trouble.

“We just want to affect the Hong Kong economy to let the government know we are serious about our demands,” said a 21- year-old student named Lee, who had spent the night making petrol bombs at City University.

“Every day, everywhere, people are getting hurt.”

There were chaotic scenes through the night at the prestigious Chinese University, with explosions, plumes of smoke, yelling and sustained firing of tear gas and rubber bullets during which scores were injured. Hong Kong’s Hospital Authority said 81 people had been injured since Monday, with two in serious condition.

The youngest was 10 months old but the cause of the infant’s injuries was not known.

Dozens of commuters scrambling to get to work tried to stop a rural metro station in the eastern part of the city from shutting after the metro operator, MTR Corp, announced it was stopping services there.

Several train lines, stations and bus routes were shut because of damaged facilities, the operator said, adding that its whole train network would shut by 10 p.m. (1400 GMT), more than two hours early.

“It is very painful to watch my city turn into this. Look at everyone, how angry they are,” said Alexandra, a 42-year-old insurance executive who had been trying to get to work.

“We all want to return to normal, but how can the government do that if they don’t listen to what Hong Kongers have been asking for,” she said.

Police rammed barricades with buses to clear them outside Baptist University campus on the Kowloon peninsula. At least two people were arrested before police made a quick retreat.

Protesters later regrouped to build new roadblocks, reinforcing them with bricks dug up from the sidewalk.

“We are trying to tell the grown-ups that we can do something to stop the injustice and violence,” a Baptist University student, who gave her name as Emily, told Reuters.

“Most of us are young and we are fighting for our future. This is our way of showing how much we care,” she said.

Many banks and retail stores in bustling commercial areas shut on Wednesday, while Hong Kong’s Jockey Club canceled its evening races. Many recreational clubs said they were also shut for the day or planned to close early. 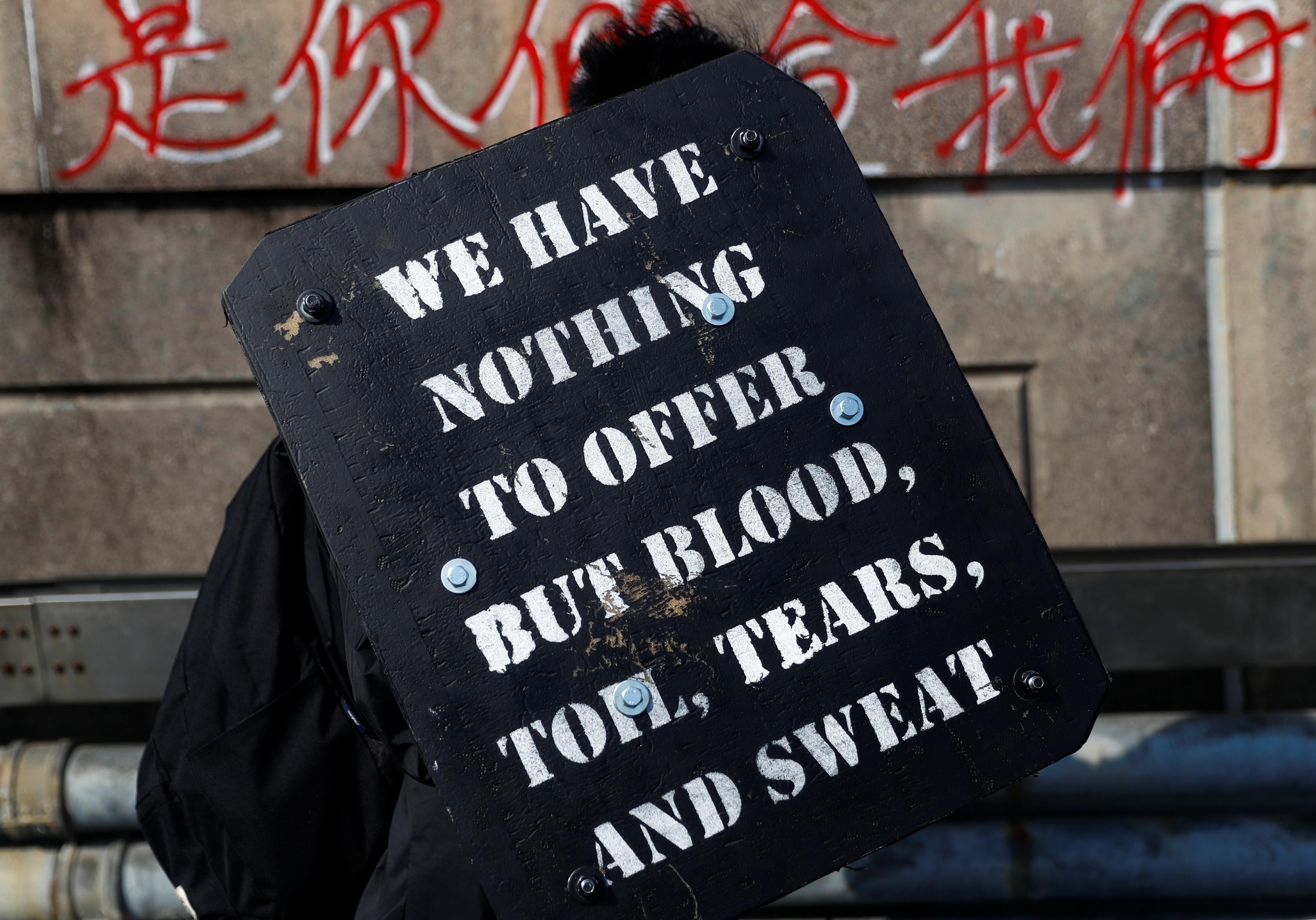 Chinese state media condemned the violence, with the China Daily newspaper saying young protesters were reveling in a “hormone-fueled ‘rebellion’”.

“It is foolish and naive to believe that Hong Kong would be better off by eliminating all mainland factors. Particularly, since the mainland is the main source of fresh water, electricity and the largest supplier of food to the city,” it said.